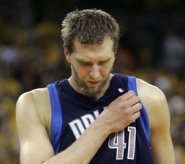 I saw this coming, but I did not think it would happen. I thought the inexperience of the Warriors would not allow them to pull one the greatest upsets ever in the NBA. When I saw the way the playoff ladder was shaping up the last two weeks of the season with Golden State and the Clippers fighting for the eighth seed, I thought “This is not fair.” Here you have a club in the Clippers that made the semifinals last year with the same identical team and the Warriors who also underachieved early, but were playing the best basketball in the NBA to end the season.

The Mavericks really set themselves up by trying to avoid playing the Warriors in the playoffs by basically throwing a game away at the end of the regular season, hoping that they would move up to the seventh spot. Avery Johnson sent a message to the Warriors and his team by sitting Dirk Nowitzki, Josh Howard and Jerry Stackhouse in that key game for Golden State.

When the Warriors clinched the eighth seed, they entered the series with the psychological edge over the first seed – a team that won 67 games.

The Mavericks are a jump-shooting team with no inside scoring whatsoever. I have never seen a team win a title that had no inside-presence scoring. That’s why the Heat figured them out last year and eventually won four straight to get the title. They just took away their ability to make jump shots.

The Mavericks top four players are all jump shooters. Nowitzki, Howard, Stackhouse and Jason Terry get the majority of shot attempts and most come from 15 feet. The reason it has worked the last two years is because DeSagana Diop and Erick Dampier provided very good interior defense and offensive rebounding – thus giving a very good shooting team more opportunities.

The reason the Mavericks were so dominant this year is because they used their shooters differently than, for example, the Suns or Warriors. They used them in a half-court slow-down pace with one-on-one clearouts, two-man games and post-ups around the free throw line.

This allowed them to play non-scorers like Diop, Dampier and Greg Buckner, who would not have survived in an uptempo game. Thus we have the defensive and rebound presence.

This system was great against 27 teams during the regular season, but not so much against Phoenix and Golden State.

Those two teams force the tempo and play small with serious inside-the-paint scoring.

Avery Johnson changed his lineup and went small to start the series and was criticized – which I thought was unfair. He did the right thing, but realized something he already knew… His small guys could not compete with Golden State’s.

The Warriors not only have shooters, but their shooters are multi-faceted and that is something the Mavericks could not deal with.

Stephen Jackson, Baron Davis, Jason Richardson, Monta Ellis and Mickael Pietrus can all shoot from the perimeter, drive to the basket and post you up inside. That advantage and the Mavericks inability to post the smallish Warriors inside caused this massive breakdown.

So how do you fix the Mavericks?

Ask Mark Cuban again if he misses Steve Nash. A pass-first point guard who can score is what the Mavericks need. They waste too much time and energy getting off shots. A guard that can get Nowitzki and Howard wide open shots without having to bang and dribble would help. Terry and Devin Harris are off guards and always will be.

They also need to find a post player that can defend and rebound, but also with a good post-up game to command a double team every now and then. Having an enforcer that can score on the other side would do wonders for Nowitzki.

The Mavericks will see how Utah takes advantage of the smaller Warriors inside players with Carlos Boozer and Mehmet Okur and forces Don Nelson to play Andris Biedrins and maybe even Adonal Foyle – especially if Al Harrington continues to be the weak link as he was in the Dallas series.

(Utah in seven, but I am pulling for the Warriors).