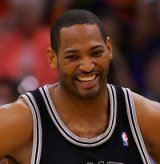 Robert Horry has been viewed as one of the best clutch players in NBA history. He has been a part of six championships with the Rockets, Lakers and Spurs. He has made a number of late-game changing shots despite not being a big-time scorer, but Monday’s might be the best assist to win a series he has ever made.

The flagrant assault Horry put on Steve Nash in the Game 4 lost against Phoenix could possibly propel the Spurs to the Western Conference championship.

In one play when the game was seemingly over, Horry could have eliminated Amare Stoudemire, Boris Diaw and limited Steve Nash if he woke up this morning bruised and sore from the cheap shot Horry laid on him. I am extremely disappointed in Horry, but the true colors of individuals will always come to light when faced with embarrassment. Horry basically acted like the guy who brings his ball to the park and didn’t get picked to play, so he takes his ball and goes home.

I understand why he was disappointed. The Suns beat the Spurs at their game and especially when San Antonio thought they had control with an 11-point lead in the fourth quarter. The problem I have with Horry is this is the precise reason why he is considered to be one of the best clutch players ever. He has broken hearts of opposing fans and sent opposing teams to the locker room with despondent thoughts after making late-game winning shots when they thought they had the game won. Now when the shoe is on the other foot, he resorts to taking out the smallest and most important player for the Suns. I wonder… If that was Kurt Thomas, would he have sent that message to him?

I must admit Horry was one of my favorite players, but only based on his unselfishness. Suns fans have never liked Horry, though, because he forced a trade to the Lakers after the Suns acquired him and Sam Cassell from Houston for Charles Barkley. I will have a hard time understanding his meltdown and why a player who had no impact or confrontation in the game causes such an uproar at the end of it.

Because of it, the Suns are in deep trouble if Stoudemire and Diaw are suspended. Stoudemire’s argument is that he was checking into the game. Well, we will see if Stu Jackson believes that argument and what he decides.

Is it fair? No way. Will it be an even tradeoff, Horry for Amare and Diaw? No way. The league has a zero tolerance policy for leaving the bench area, but they have made adjustments before and in this case they should.  If they don’t, then why shouldn’t Pat Burke or Kurt Thomas provoke Tim Duncan into a confrontation or fight in Game 5. This series is about to get real ugly and the league better set a precedent soon. We have seen some flagrant acts  get overlooked in a number of series so far without suspensions and to finally suspend  two players for doing nothing will ignite the bonfire that’s been building in every semifinal series so far.

If the Spurs are rewarded with these suspensions, Robert Horry will add another clutch moment to his career and the Suns will have to beat a very good San Antonio team in Game 5 without their top scorer. I think that, at best, is wishful thinking and the Suns would have to get a second win in San Antonio to get to the next round.