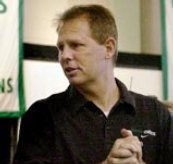 The cities of Memphis and Boston are cloudy and gloomy today. Both the Grizzlies and the Celtics went through an 82-game season and finished with the worst records, but thought victory would come in the form of either Greg Oden or Kevin Durant. Well, the lotto balls had another say in the matter and they came up with Portland and Seattle. I don’t know who to feel sorrier for – the two great players or the two teams they thought would have their rights.

Portland and Seattle will offer a lot of rain, long flights and very little chance at making the huge marketing dollars that I am sure Oden and Durant had envisioned playing on the middle or the East coast. But if they are thinking basketball without the distraction of the night life, then they are on the right teams.

I do feel sorry for Memphis. Oden or Durant would have raised them back to the 50-win team they were a short while ago. Plus they have struggled for so long that they really did deserve a break. If you want me to feel sorry for Boston, though, you might have to wait a long time.

The only people I feel sorry for in Boston are coaches Doc Rivers and Tony Brown. I might feel a little compassion for ex-teammate Dana Barros, who happens to live in Boston, but that’s where it stops. These people were not a part of the Celtics when they regularly beat up and embarrassed the entire league for a decade in the 80s and early 90s. Don’t even allow me to go back further when Bill Russell helped them destroy the league.

Why on earth should I feel sorry for them?

I remember when the Celtics went through the motions with Larry Bird, Kevin McHale, Robert Parish, Danny Ainge, Dennis Johnson and Bill Walton for three quarters and then took your confidence in the fourth quarter. They would then laugh and have a good time on the bench. I saw so many highlights of the party atmosphere they used to have at the end of games it made me sick with envy.

I remember Bird coming up to me before a game my rookie year and asking me, “Are you going to be guarding me? If you are, I’m going to wear your behind out.” (I changed the wording).

He did not go back on his word that night.

I remember a few years later when I already had great self-confidence and I got the best of Bird. And to add to it, I allegedly popped him in the mouth at the end of the game. He was so confident that he walked in my locker room after the game and dropped his room key on my lap and said, “Let’s finish what you started later”.

I thought about going to his room that night, but not to fight. I wanted to get some pointers on how I could be half as good as he was.

It was that confidence from Bird and the feeling you got from the Boston fans that made you hate them with envy. The Celtics went into every season worried about one team and that was the Lakers. When you beat the Celtics, they always said they didn’t play well and it had nothing to do with who they just played.

So again, why should I feel sad for the Celtics? Don’t they have 16 championships?

Yes, I understand that the players there have nothing to do with my misery, but I just can’t help myself. I always cheer for the team that is trying to get what the other has had success in.

Heck, I even root against my hometown team Chicago Bulls. I grew up watching Bob Love, Chet Walker, Jerry Sloan and Norm Van Lier. But after being destroyed and dominated so many years by Michael Jordan and Scottie Pippen, do you think I would feel sorry for the Bulls. Last time I counted, they had six championships.

I root for Utah, Memphis, Phoenix, Cleveland, Sacramento and any team that has not won a title. I never feel sorry for any team or city that has dominated like the Celtics, Lakers or Bulls.

So here is hoping that Yi Jianlian from China can become the next Larry Bird and Bostonians can say, “Look, we didn’t need that stinking lottery pick.”