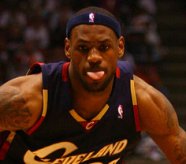 The dictionary definition of King is “a male sovereign”, “a chief among competitors”. My definition is “The Man, unstoppable, pure and close to perfection in the art of dominating”.

LeBron, you are not that yet and if you don’t start to work on your deficiencies you will be removed from the title of King that should not have been bestowed upon you at such young age – especially when we still have Kobe Bryant, who is the best player on the planet.

LeBron, you refuse to work on the most difficult part of the game. I have no clue who your shooting coach might be, but he has not helped you.

I still see the same mistakes in your jumper that I saw when I watched you during those ESPN high school games. The Pistons have studied film and they know your weaknesses. They have exploited you and sadly you and your team are slowly fading away because of it.

LeBron, in order to become a player like Air Jordan or Kobe Bryant you must master the skill that set those two apart from everybody else. MJ and Kobe had and have an unbelievable mid-range game to go with excellent free-throw shooting. With that, you wouldn’t allow any defense to stop you in your quest for excellence on offense.

Let me give you a war analogy – thus using the History degree I received from the University Of Illinois… The airplane and missile were the best inventions ever for war because they allowed you to strike from far distances and achieve great benefits without exhausting your troops and putting them in harms way consistently. The plane and the missile are also the most laborious to perfect because of cost and the time it takes to build them.

This use of weaponry softened up the defensive tactics of the enemies and made them come out in the open. Then the enemies would be taken advantage of.

That’s what the jump shot does in basketball. It forces the defense to extend itself, thus allowing you to penetrate and still achieve success – but in a more devastating and precise manner.

LeBron, you have no consistent ability to achieve that on the basketball court. I have to believe that whoever coaches you on shooting is constantly reminding you of one fatal flaw. Every time you shoot the ball, you are off balance. You are either fading away or leaning sideways. What that does is force you to shoot at a moving target. Your mechanics are not the greatest, but if you would just eliminate those off-balances flaws you would have a better result.

Think about it. All you needed was two more of those jumpers to fall and the Cavaliers would be up 2-0 instead of down 2-0. But it was obvious to me in Game 1 – when you had a layup and passed it to Donyell Marhall – that you were occupied with the thought of maybe having to go to the free-throw line and then having to hit two shots.

At the end of Game 2, you had a 10-foot jumper at your leisure over Richard Hamilton but you executed a half-hook off-balance shot and wanted a foul – which you know officials will not call to decide a game. Just look at the hit Rasheed Wallace put on noted flopper Anderson Varejao. He did not get called. (And he should have).

Bottom line with my war analogy… The planes and missiles are laborious and expensive. It takes hours upon hours to perfect the best weapon. Well, the jump shot is the same way. You need to put more quality time on perfecting that jumper or you will be dethroned.

LeBron, also please tell your coach that he will not win the series unless he rolls the dice and puts shooters on the floor. That means Donyell Marshall, Damon Jones, Daniel Gibson and Sasha Pavlovic. That might allow you to shake loose like you did for a short stint in the first half of Game 2.

LeBron, I did write an article a while ago about Danny Ferry‘s big mistake: not supplying you with enough shooters. Larry Hughes was not the answer (6-22 in the series). This is not Hughes’ fault. He is just not a shooter. We saw Hughes’ awkward fade away at the end of Game 2. A real shooter would have used the glass to soften the touch on a shot like that. So because of the lack of long-range snipers, you are shooting 12 for 34 after the first two games and things look very bleak.

Your kingdom is very much exposed and taking a beating. Take my advice and toughen it up by developing that mid-range game like Mike and Kobe did and then you really will be King.