Spurs will not intimidate Cleveland

Spurs will not intimidate Cleveland 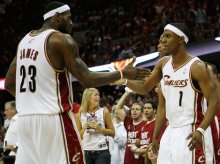 The San Antonio Spurs are the overwhelming favorites against the Cleveland Cavaliers. The Spurs have a ton of experience and the best low-post player in the league in Tim Duncan. This series on paper should be over quickly, which is not something the league would like to see happen for a number of reasons. The Spurs will try and take advantage of the Cavaliers early with physical play and a defense that will force LeBron James to encounter Duncan and a maze of Spur defenders waiting to either draw a charge or force a bad shot or errant pass. The Spurs are the best team in the league at taking away the three-point shot and Daniel Gibson will not see daylight.

Remember I am making this statement even though the Cavaliers beat the Spurs twice this season and statistically had a sincere advantage as well. So now should I start to waver a little? Should I dig deeper and see if the two Cavalier victories are a sign of consistency and not luck?

Hmmm, let me see. Hold up for a second, let me make sure I say the right things and get my facts right. I am not a favorite in Spur Land and the diehards have taken offense to my article on Robert “Body Block” Horry during the Suns series. So I will take my time and make sure I don’t ruffle any feathers down in Texas.

OK, I am back from my two-mile run and I did a lot of thinking back and forth. I had a lot of time to think because unlike when I was in pristine shape, I only worry about finishing the two miles and not the time it took me to run it.

The Cavaliers have a sincere chance to win this series. The two games in which they beat San Antonio were done on the defensive end. They held the Spurs to 40 percent field goal shooting and beat them by a plus 9 on the boards. They also got to the free-throw line 10 more times as well. These are the things the Spurs excel in, but still the Cavaliers were the dominant team in these categories.

Factor in the improved play of Daniel Gibson and his ability to get to the free-throw line. Those numbers on paper look better. So why should we think the Spurs will waltz through the Finals? We look at the inexperience of the Cavaliers and say, “Well, that’s enough.” But isn’t that what we heard in the Pistons series? What did the Cavaliers do to that experience? They basically outplayed the Pistons in every game. I am not convinced the Cavaliers will win, but I am not convinced the Spurs can’t be beaten either.

Defensively, if I am Cavalier head coach Mike Brown I would be studying tape of the Detroit series and devising a way to treat Tony Parker and Manu Ginobili like Detroit treated LeBron. The Cavaliers have no one on their roster that can guard Parker and Ginobili head-up and negate their forays to the basket. So you trap both and make them give it up. Yes, they will escape at times. But they will run into some extremely physical defenders that can take charges and change shots.

The Cavaliers need to take a page from the Suns and guard Duncan without doubling down. Anderson Varejao and Drew Gooden with Zydrunas Ilgauskas on the weak side for rebounding will have to accept the challenge. The Cavaliers will use Scot Pollard for fouls as well.

This will force Michael Finley, Brent Barry, Bruce Bowen and Robert Horry to beat them with perimeter shooting. Can it backfire? Of course. Just go ask Detroit. But this will be their only chance to win this series.

Gregg Popovich is not excited about playing someone that knows his players’ weaknesses and vulnerabilities and that is why it will be harder for San Antonio to prepare for Cavaliers more so than the other way around.

Offensively, the Cavaliers will have to run LeBron off down screens, back screens and two-man games to free him up for quick scoring attempts before the Spurs can set their defense to load up against him. The Cavaliers will struggle if Brown allows LeBron to consistently start with the ball behind the three-point line. The Spurs might be the best ever at loading up on an offensive player when all five defenders have two eyes on him. Also, Ilgauskas will have to be a factor against Francisco Elson and Fabricio Oberto. He has to score 15 to 20 points for the Cavaliers to have a chance.

Drew Gooden, Daniel Gibson, Larry Hughes, Damon Jones… Two of those players will have to score in double figures.

Cleveland beat Detroit with a stifling physical defense so the Spurs will not intimidate the Cavaliers because Detroit arguably had a better offensive arsenal than what they will face with the Spurs.

With all that said and done, I think the Spurs will win in six. But Cleveland will not go away quietly. Get ready for a very good series.