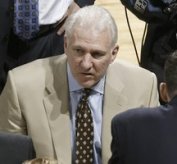 I was flabbergasted to see how Tony Parker just waltzed into the lane with not one hard foul. The Cavaliers defense looked like it would on a regular-season game in the first quarter. They played a basic defense by just doubling down on Tim Duncan and rotating out. The Spurs had to be surprised that not one wrinkle was employed to at least thwart their offense and force them to go to a second and third option.

Now this is only the first game, so I will not be extremely hard on the Cavaliers. This series is far from over, but the effort exerted in the first quarter by the Cavaliers was atrocious on the defensive end. The experience and the talent of Parker and Duncan were too much to overcome in Game 1. This can’t continue or this series will be over real fast. I will give a summary of each game in the series focusing on coaching, individual key players and what to expect in the next game.

Gregg Popovich had to be smiling inside when to start the game the Cavaliers came out in a traditional double-down defense on Duncan. He basically ran the two-man game all night and kept his shooters spaced. And although the Spurs did not shoot the ball well outside the paint (12-28), they made up for it with by getting 34 attempts in the paint and making 22 shots. He also won the battle with his defensive scheme on LeBron James. I said it in my last article… If the Cavaliers run their offense through James at the top of the circle, he will struggle. The Spurs might be the best ever when all five players can see and load up on who they want to stop on defensive end of the court. They ran two and three players at James all night, but they are able to do it because Bruce Bowen is pressuring James to turn away from the defense and that split second sends a second and third defender to force James to pass to a three-point shooter and not a post player because Duncan is stationed in the paint. Popovich is fast becoming the next Phil Jackson in terms of the mental domination he exerts over opposing coaches.

Mike Brown has to be willing to take chances and last night he stayed basic and paid a price with the Game 1 loss. The Spurs were ripe to be beaten last night, but Brown’s lack of creativity on defense allowed the Spurs to gain confidence and get rhythm with 22 layups. Duncan mentioned after the game how surprised and thankful he was to get such easy opportunities early in the contest. Going into this series, even Brown said Tony Parker would be a major issue – especially with the injury to Larry Hughes – and yet he did nothing creative to at least to make him think.

I assume you might ask, “What you can do against the best player in the league at scoring in the paint off the dribble?” Well, let me think. Mike Brown, have you seen anything lately that you could try that might force Parker to give up the ball and force Finley, Ginobili and Horry to feed Duncan. Double-team him, take the ball out of his hands, do the same thing to him that you have seen done to LeBron James throughout the entire playoffs. Mike, you have no one on your roster that can guard him. Who cares if Bruce Bowen and company get wide-open three-point shots? That group shot a combined 12 for 35 that you might be worried about if you force Parker to give up the ball and thus not get into the lane for 9 layups. Parker meanwhile shot 3 for 9 outside the paint, in case you are worried about his outside game. Brown needs to realize he must take chances on his defensive philosophy because basic is what the Spurs are – and the Cavaliers will lose that game every time. Also, Brown has to give Daniel Gibson more minutes over Hughes because he is on fire. Who cares about his defensive liabilities with the bigger Spur guards? What about plus-minus? Gibson matched Ginobili’s 16 points in the same 28 minutes while Hughes had 2 points in 23 minutes.

Tim Duncan is so boring and good that it is beyond description. I had Duncan No. 2 behind Karl Malone for best power forward ever, but he has moved past him with his dominance in this year’s playoffs. He took 17 shots and 13 were in the paint. Parker made life extremely easy for him offensively, but defensively he is the main reason LeBron struggled. LeBron can take Bowen off the dribble, but he couldn’t elevate in time to overcome Duncan’s defense.

Tony Parker is right now the best penetrating point guard I have ever seen for his height and weight. It’s one thing to get in the paint, but this guy can finish and not just on players his size but against taller players as well. I know his stature sometimes fool you, but he is fearless and will cut your heart out. That’s what he did Thursday night especially in the first quarter. Parker finished the game shooting 12 for 23, but when you look deeper you see the beauty of Parker. He shot 9 of 14 in the paint and 3 of 9 outside the paint. Parker can brag about his improved jump shot all he wants to, but the bottom line is he knows he must get layups to be successful and he almost wills himself to get to the rim. The Cavaliers have to finally start treating Parker like the Spurs treat LeBron because if they don’t, he will dominate the entire series.

Manu Ginobili was controlled for the most part, but he did hit two huge three-point shots that kept the Cavaliers at arms length at key moments of Game 1. The Cavaliers, we would assume, will try and negate Parker and Duncan in Game 2 thus allowing Ginobili to prosper. He really helped the Spurs attacking the defensive glass and grabbing 8 rebounds.

LeBron James must stop this process of getting everyone else involved in the game early and then deciding to jump in. He must be aggressive and score from the start because he will not get a ton of opportunities. He passed up at least five chances to attack early because he was deferring to teammates. I wrote an article about LeBron a few weeks ago and the King James worshippers attacked me with a vengeance. I wonder, “Are those same people starting to see what I was talking about?” LeBron should face facts in this series and that is he will not get many layups and I ask why? Because the Spurs do not think he will make a consistent jump shot to force them to extend their defense. Yes, he got hot one game against Detroit and it paid dividends. But in order to convince defenses to change, you have to be consistent and confident with that mid-range jumper. What’s a mid-range shot? It’s every shot outside the paint but inside the three-point line. James was 0 for 6 at that range. He made two layups and two three-point shots. That is exactly what Lebron can’t do in this series or the Cavaliers have no chance to win. He did do his usual good job on the glass, but that Spur defense forced 6 turnovers with only 4 assists.

Daniel Gibson is the real deal. You don’t perform on the stage he has in the last few weeks and regress. He has the confidence of a 10-year veteran right now and Mike Brown is the only one playing defense on him by still limiting his minutes. Gibson matched Ginobili’s numbers (16 points) in the same amount of minutes. He shot 7 for 9 and a number of them were created off the dribble.

Zydrunas Ilgauskas shot 1 for 8 and I will go on board and say 7 of those shots normally go in. Z just has to play more concentrated aggressive defense to allow Brown to keep him on the floor. He is the only big player other than Drew Gooden that can occupy Duncan defensively, so he will not focus solely on James. I said he must score 15 to 20 for the Cavaliers to have a chance in this series.

Sasha Pavlovic was active on both ends. I thought he did a very good job. He shot well and defended Ginobli, keeping him on the perimeter and only allowing the one layup in the half-court offense. I think he will play a huge role in the series as we move to Game 2.

Look for the Spurs to try and get Michael Finley involved more offensively. Finley is their wildcard when one of the Big Three isre not having the usual good offensive game. He was 0 for 7 after making the first shot of the game. The Spurs also know the Cavaliers will do a better job of taking away layups and so they will have to shoot better from the perimeter- The Spurs were 12 for 28 outside the paint in Game 1 and that has to give the Cavaliers hope for Game 2.

Look for the Cavaliers to change their defense on Parker and maybe blitz and double team him every time the Spurs try and run a two-man game, especially with Duncan. The Cavaliers also have to work harder to free LeBron. Look for LeBron to play off the ball early in Game 2 to allow him to catch and go before the Spurs can load up their defense. The Cavaliers will also be extremely physical with whoever drives the lane in Game 2, thus elevating the tension of the series.