It was ugly, but San Antonio reigns again

It was ugly, but San Antonio reigns again 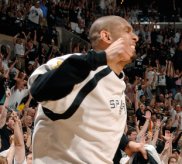 The San Antonio Spurs have won their fourth title in nine years. I can’t say that is a dynasty, but they are definitely a true team and organization in every sense of the word.

The Game 4 sweep went as expected. Although the Cavaliers made a nice run in the fourth quarter, it was obvious based on their inept shooting that it was just a matter of time before the Cavaliers came back to earth. This was the ugliest Finals I have ever seen. We experienced no great plays to talk about, no unbelievable performances from individual players, no physical confrontations that you should see when a title is on the line, no complaining about the officiating and jockeying from game to game. Just plain boring. The only fans in the country that thought this series lived up to Finals were probably Spur fans.

The shooting in this series was the worse I have ever seen in any series, not just the Finals. Tony Parker won the MVP, but his performance was not the star quality that we expect on the biggest stage. I marvel at how consistent and smart the Spurs play year after year. But if you just focus on their leader, Tim Duncan, I think you learn to realize why they are so consistent. He has given the Spurs a foundation that has sprouted players like Parker and Manu Ginobili and there is no reason to think it will not continue.

During this playoff run, the Spurs were like a runner going up hill starting with Denver and Phoenix and then they just cruised down hill against Utah and Cleveland. I thought that should be the other way around. But when Dallas got upset and Detroit underachieved against Cleveland, the clean easy road was laid out for them and they took advantage just like great teams do.

I do applaud the Cavaliers and what they accomplished this year as a team. I don’t care what conference you are in, you have to have total team effort to get to the Finals and they did. The Cavaliers will learn from this loss and hopefully continue to grow because they have perhaps the best basketball specimen that has ever played the game, but the challenge for LeBron James and the Cavaliers is to get better both individually and as a team.

Gregg Popovich simply outcoached his pupil Mike Brown in every facet of the game. I don’t think one time in this series did the Spurs have to make an adjustment to what Mike Brown did with his strategy. Popovich has the respect of his players to the point they should call him surrogate dad. I have never heard or seen a dispute among Popovich and his players since he has been coach and that in itself is unbelievable. Phil Jackson, Jerry Sloan and Popovich are the three best coaches in the league and any player should want to play for them.

Mike Brown did not fight enough for his team, in my estimation. He praised his former employer too much in this series. He respected Duncan, Ginobili and Parker too much as well. The reason I make that characterization is because I never saw him complain and ride the officials from game to game, especially about how they were manhandling LeBron, or anything the Spurs did whether it was wrong or not. I would have complained big time about the foul attempt by Bowen on LeBron in Game 3. He looked intimidated and it was obvious to anyone that Brown’s friendship with the Spurs brass hindered him. I still applaud him for what he accomplished this season and he definitely has the ability to bring them back. I am pretty sure he hopes the opponent is not the Spurs.

Tony Parker proved that he is fast becoming one the most unstoppable point guards ever at getting to the basket. He has a toughness that equals Isiah Thomas and that right there is the best company he could ever be in. He took over this series from the start and had his imprint on it until the sweep was complete. He also has become Duncan’s equal in terms of leadership and that should make David Robinson proud of Duncan in that the transfer of leadership that he started when TD was drafted has continued.

Tim Duncan is a model for any young basketball player wanting to emulate an NBA player. He is the consummate pro, although he has a minor flaw of complaining too much with officials. But it does not even amount to a visible dent in Duncan’s armor. His footwork and ability to create any shot off the post is so far ahead of most players that it is not even comparable. Add his unselfishness and you have a coach’s dream. I rate Duncan and Karl Malone as the greatest power forwards ever and Duncan gets the edge because of four championships to Malone’s zero.

Bruce Bowen is the most important player on the Spurs regardless of the Big Three. He guarded Carmelo Anthony, Allen Iverson, Steve Nash, Shawn Marion, Deron Williams and LeBron James during the playoffs and still found time to concentrate and knock down open jump shots consistently. Bowen gets a lot of attention for his defensive tactics, but he is one the classiest players in the league and is well respected off and on the court. The Spurs would have been beaten if they did not have Bruce Bowen before they got to Cleveland.

LeBron James is without a doubt the future of the NBA, but only if he continues to work at the feverish pace his predecessors did. Michael Jordan, Magic Johnson, Larry Bird and now Kobe Bryant had and have a tremendous desire to be the best. James can be them and more with continued hard work. I have never seen a player with his size and speed ever in an NBA uniform. He can become virtually unguardable, but as I have said during these playoffs, James has to work on his mid-range game. He has serious mechanical issues that can be corrected, but only if he is committed to getting it done. The memory of shooting 10 for 30 in Game 4 and not making a mid-range shot until after 60 attempts in the series is reason enough for James to seek help and change his bad habits. When he learns to shoot the ball, watch out NBA!

Zydrunas Ilgauskas looked very old in this series. His ability to jump is gone and foot problems over the years obviously are the culprit, but Z did not have enough fight for me – especially when he guarded Duncan. He had one good game with 18 rebounds, but his shooting went south and that’s something the Cavaliers needed in this series.

Larry Hughes was hurt most of the series, but he struggled this year even before the injury. I wrote when they signed Hughes that it was a mistake because Hughes needs the ball and that will not happen with LeBron. They will try and shop Hughes this offseason, but foot problems and contract will not allow Cleveland to get rid of him.

Look for the San Antonio Spurs to go after Grant Hill and a backup point guard to bring more versatility to their team. They are the oldest team in the league and it will surely start to show next year. Robert Horry wants to come back and I surmise they will allow him to, but only out of respect because Horry was not a factor during this championship run other than starting the confrontation against the Suns that led to Amare Stoudemire and Boris Diaw being suspended. The Spurs realize it will be extremely hard next year with Dallas, Phoenix, Houston, Utah, Golden State and Denver around, but they are the champs and everyone wants what they have consistently gotten over the last nine years.

Cleveland should have one mandate and one only. Go find shooters. Heck, I honestly thought about flying to Cleveland and hanging around the locker room after the first three games. James will become a magnet for shooters now that he has shown an ability to carry a team to the Finals. The Cavaliers have all the other ingredients except that ability to make open shots. I think Daniel Gibson and Sasha Pavlovic will continue to grow, but the Cavaliers should not invest all their stock in those players just yet. I look for Cleveland to win 50-plus games and make another run next year and James hopefully will have at least improved that mid-range jumper, thus becoming the most unguardable player in the league.