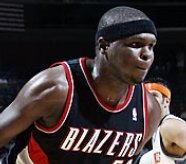 I love New York! Yes, I said it. I love to shop and watch Broadway shows like every tourist. But the best thing is playing in Madison Square Garden, which is Zach Randolph‘s new home.

Let’s break down the trade, which I think was a good move both for Knicks and Blazers.

First, Isiah finally got Stevie Franchise‘s dollars off the books. Now Steve can go to Portland… Although the way owner Paul Allen is spending money, they might buy out Francis’ contract. Portland has a lot of young talent and they keep stressing they’re looking for quality people. I’m not saying Francis is a bad person, but he has had his run-ins with coaches and teammates over the years. Plus they have tons of guards.

Second, Zack Randolph is a stud! He averaged 24 points and 10 rebounds last year and is great at scoring in bunches against anybody. Remember he did this is the Western Conference. Now the baggage and off-court issues that Randolph brings are always going to be an issue. He is New York, the town that never sleeps. If he can get in trouble in Portland, watch out NYC. He’s about to paint the town Red, White, Blue, Green, Purple and any other color you name. I’m not saying he can’t change. But it’s New York City.

The other issue is… Can he coexist with Eddy Curry? I think he can. Randolph can play facing the basket and will be a handful for any power forward in the East to handle. The Knicks now have the best low-post threats in the East. No question. Name a better couple. Magic’s Howard/Milicic? Pistons’ Webber/Wallace? Heat’s Shaq/Haslem? Cavs’ Big Z/Gooden? Sorry, I don’t think so.

Lastly, the throw-in players are not bad players at all. Channing Frye will be a great player to play with Greg Oden and LaMarcus Aldridge. He is a tall 4 who can spread the court with his jump shot out to three-point range. For the Knicks, acquiring Fred Jones, an athletic 2 guard will help Isiah be more athletic in the backcourt.

So both teams got something from the deal. The Knicks just hope the city doesn’t get Zach Randolph.