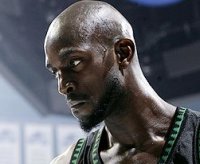 The NBA marketing machine has been at full speed over the last few weeks and it finally came to fruition with arguably the best draft in years. I became extremely tired of all the rumors – false and true – about key players being moved without anything happening. I had pen to paper ready to comment on Kevin Garnett becoming a member of the Phoenix Suns and then I was immediately counter-punched with the Lakers landing Garnett and finally I was flabbergasted about the idea of Amare Stoudemire landing in Atlanta.

Garnett is a coach’s dream. He plays every game with intensity and professionalism that is second to none. He has become one of the best double-double machines in the history of the game. He is a tremendous leader and role model, but the question remains… Does he have the ability to put a team on his shoulders and carry it the extra step to the Finals?

Trading Shawn Marion to Boston to help facilitate the deal seemed like the best course for the Suns to make to land Garnett. Marion would love to eventually prove his game is at a higher level than what he is allowed to do offensively and Boston looked like a good destination for Marion to finally get that chance.

But moving Amare and thus subtracting the dominant-in-the-paint scoring for the medium-range game of Garnett would have made the Suns truly a jump-shooting team. Plus the six-year age difference would have been a big gamble for new general manager Steve Kerr to decide on when making the deal – especially since Amare has seemed to recover from microfracture surgery better than anyone ever has.

Regardless, the draft went on as scheduled and plenty of trades were made. But they did not include the wow factor of a Kevin Garnett or Kobe Bryant.

I like the trade for both teams. The Celtics have the best jump-shooting twosome in the league now with Paul Pierce and Ray Allen. Those two will enable Boston to finally get back in the playoffs if Al Jefferson continues to grow and give them inside punch. Jeff Green and Wally Szczerbiak will replace Ray Allen’s outside punch and save the Sonics new ownership a boatload of money as well. Green is the real deal. He will push Kevin Durant and Greg Oden for top rookie honors with his mature feel for the game.

Zach Randolph to the Knicks

The Knicks have just become the best interior scoring team in the league on paper. I guess you have to wonder if there is enough space for two of the best wide bodies in the league – other than Shaquille O’Neal – in Eddy Curry and Randolph. If those two can coexist in the post and Stephon Marbury and Jamal Crawford show willingness to not jack up quick shots, the Knicks will finally be back in the postseason.

The Blazers have almost officially cleaned house. Darius Miles is still around, but the Blazers will probably look to remove him and Steve Francis soon as well. Channing Frye is the perfect fit for Oden and LaMarcus Aldridge. He can play small forward, which would give the Blazers the biggest frontline in history at times this season.

Jason Richardson to the Bobcats

OK, the Warriors got a ton of money off the books by moving J-Rich and that seems fine. But they also gave up scoring, toughness and the wow factor that puts fans in the seats. The Bobcats got the veteran scorer they need and if Rashard Lewis comes on board, the Bobcats become extremely competitive.

The Warriors pick up potential. Brandan Wright has high upside and would seem to fit in the Warriors’ style of play, but Don Nelson has never been a great coach for rookies and that could take a toll on the best team in the final month of the regular season last year if they cannot replace Richardson’s scoring.

Oden and Durant are the class of this draft. And unlike when Magic and Bird were drafted and only faced each other twice a year, these two will compete on a regular basis the first four years of their career. The Trail Blazers had no choice, although Durant is the most talented player in the draft. The Blazers went with upside and defense by drafting Oden with the first overall pick.

The Atlanta Hawks did extremely well by picking the best player available in Al Horford and admitting they made a mistake in drafting Shelden Williams last year. Acie Law could be the saving grace for not drafting Chris Paul and Deron Williams a few years ago.

The Memphis Grizzlies will have to wait a while for Mike Conley to become the leader they expect. His offense is all about driving to the basket. Remember I said this; there is only one Tony Parker. Message to Conley: Get a jump shot.

I hope the Bucks play hard ball with Yi Jianlian, who does not want to play in Milwaukee. Yi is a player in disguise. We have no clue if he can play at this level right now because he refused to work out against the talent in this draft. If I am Milwaukee, I would let him sit out the season to send a message to his entourage that Yi should be happy to be a part of the National Basketball Association. He might wind up sitting on the bench anyway since no one knows if he can handle NBA competition.

Corry Brewer will not force Kevin Garnett to say “Wow, we have chance this year”, so look for trade talk to continue. Kevin McHale is now running the risk of losing Garnett without compensation if he opts out or by not getting equal trade value because teams will see his desperation. Brewer needs to get stronger and improve his offense before this pick pays dividends.

Ben Wallace officially can now say, “I don’t have the worst shooting form on my team.” I am so tired of great athletic players coming to this league that can’t shoot. Billy Donovan should be ashamed that the highly-skilled Noah has one the ugliest jump shots I have ever seen. I am trying to figure out where he fits with the Bulls. They can’t play him with Wallace or Tyrus Thomas, so why didn’t they draft a low-post scorer like Spencer Hawes or trade for Zach Randolph? The Bulls have enough Corvettes already. They better start to get some Hummers like the one they gave up in Eddy Curry.

Al Thornton’s age was a problem with some teams. Wow. What’s wrong with being 24 and good? Well, the Clippers didn’t mind and they will have a big-time scorer and athlete for taking the chance. Thornton will command time and maybe allow the Clippers to finally part ways with the underappreciated Corey Maggette.

Marco Belinelli must obviously be the reason the Warriors thought parting ways with Richardson and drafting Wright would keep them competitive. Marco loves to shoot, so let’s hope Nellie will be patient with the rookie in hopes of finding the scoring he gave up in Richardson.

I am convinced that Isiah Thomas could be a godfather in the Mafia because he could care less what anyone thinks about his method. And guess what? He usually comes out smelling like a rose at draft time. He has drafted David Lee, Renaldo Balkman and now Wilson Chandler. Who? That’s what we always say until he proves again that he has best eye for talent late in the draft than any general manager in the league.

Aaron Brooks will become the most popular small player in the league this year. This kid can flat out score. I saw Brooks dominate two fellow draft picks last week in workouts and it was embarrassing. If Brooks was 6-5, he would have been the third or fourth player taken in this draft. That’s how good his offensive skills are.