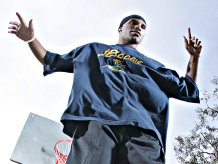 Slam Magazine called him the King of Cali streetball. And for real this dude has been doing it nationwide. The kid from California with the sick handle has played on the And1 tour, played against the best in the country every summer at UCLA as a Magic Johnson All Star, played in the CBA, NBA summer league and the NBDL. He’s shared the court with NBA players like Paul Pierce, Baron Davis, Jason Richardson, Sam Cassell and Derek Fisher. He’s also played overseas in the Bolivian League, where he was named MVP and earned the nickname The Roadrunner for his speed and quickness with the ball. The 6-foot point guard is like that and his game has a NYC-ish flair. And you know the LA native was down with the Showtime LA Lakers of the 80’s, but let him tell it.

“My name is Jay Brantly and I’m old enough to remember when basketball was a team sport and when Showtime ruled the league,” says the South Central, Los Angeles native. “Magic Johnson and the Showtime Lakers during the 80s era of NBA basketball were my basketball idols when I was younger. I liked their fast-break, run-and-gun style of play. I try to replicate that same style on the court today.”

The name J. Boogie was given to him because people always said that he looked like he was dancing on the court or boogin’ down. His quickness and speed allow him to blow by opposing players and get to the basket easily. Spectators are often left speechless and amazed by his ballhandling skills and tricks.

“My game is flashy, but at the same time has substance to it,” Jay says. “I model my game after the Showtime Lakers’ style of play, where it is enter­taining for the crowd while still using fundamentals. I learned by playing in the parks and at various courts at the beach – legendary streetball court Venice Beach is one of them.”

And Jay started balling young learning the game from his family and other dudes from the neighborhood.

“My uncle Kenneth and my cousin Vincent taught me how to play when I was around 3 years old. I really got into playing basketball when I was younger through pickup games at Hawthorne Park,” Jay says. “I began playing ball at Rancho Cienega Park, located in the Crenshaw District of LA, when I was 7 years old. At the age of 9, I learned the fundamentals of the game.”

And from there Jay went on to star at Granada Hills High School.

“I attended Granada Hills High School. My senior year I was voted 1st Team All-Los Angeles, All-City and Valley Player of the Year. I was also selected for the 2nd Team All-State and received honorable mention for the High School All-American Team,” Jay says.

That senior year he averaged 24 points, 11 assists and 3 steals per game including a 52-point game vs Montclair Prep. After high school Jay attended Southern Idaho Junior College for two seasons and then transferred to UNLV, where he played for the Runnin’ Rebels for two years averaging 10 points, 6 assists and 2.4 steals per game.

Jay didn’t get drafted but briefly flirted with the NBA.

“I played in the NBDL and when I attempted to enter the NBA I was told by NBA insiders that I was not what they were looking for.” Jay says. “They wanted a big guard. At the time I was like 5-foot-11. Like any other basketball player, you aspire to make it to the NBA, to be seen by millions and to make millions. But I am happy with what God has given to me now. I get to play the game that I love and still positively affect people’s lives with my talents.”

And Jay has affected people in many ways.

“Streetball has always been a part of my life,” he says. “Before all the And1 mixtapes – which I was on volumes 2-4 – and their tours I was balling on the blacktop. I’ve played with my idol, Magic Johnson, on his traveling team also.”

So like Slam Magazine said, J. Boogie is the King of Cali streetball. But Jay wanted to give back more to his community, he wanted to do more for the kids. First he started the Running J’s program to work with kids and to enrich and bring confidence to youth’s lives. Through the program, Jay holds clinics for kids where he teaches them basketball and life skills. And from that Jay has moved forward to create the LA Hooptainers, an entertainment basketball group for the new era of basketball that consists of streetball legends and celebrities that tour the country combining hip-hop and basketball. They are known as the modern day Harlem Globetrotters and their website says, “The Hoop­tainers are here to change lives and to make a positive imprint in someone’s future.”

“In conjunction with Macleem Sports Wear, we have been touring to several different countries,” Jay says.

They’ve been to China, Central America and the Caribbean. Jay has also gotten involved in movies.

“I am involved in the filming of Sweetwater,” Jay says of the film that chronicles Nat “Sweetwater” Clifton, a Harlem Globetrotter and one of the first black players signed to an NBA team.

“I will be playing the role of Marquis Haynes, Nat’s teammate during his days on the Globetrotters,” Jay says.

And the streetball legend is staying busy. The LA Hooptainers will participate in the World Streetball Championships this summer.

“The WSBC is a series of full court 3-on-3, no-holds barred single elimination tournaments played in five major cities across the United States,” Jay says. “If you lose, you go home. This tournament will showcase the best known streetball players across the globe.”

Besides that Jay will be hosting the Hooptainer events.

“The events always have an up-tempo style but we play with discipline and honor. Its not like a video game,” Jay says. “For those that can recall the good ol’ days of the NBA, we play exactly how the Lakers played in the 80s. Of course, I’m the MJ of the team.”