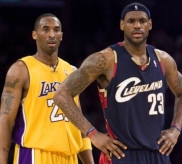 Dwyane who? Dirk what? Duncan why? KG where? Nash how? In the mighty, mighty world of the NBA, the league that boasts the world’s finest athletes, the debate can rage on forever. Who is the best? The most exciting? The most dominating? Ask a hundred people and you might get 50 different answers. But here we call it like it is. And we expose suckers for what they are – suckers. Not to say any of the above are suckers, but when it comes down to it the debate of who’s the best really centers on two players. Kobe vs. LeBron.

The Black Mamba vs. The Chosen One. The Assassin vs. The Prodigy. Could you imagine a one-on-one game between these two? Where is the video game? Remember the Larry Bird/Dr. J one? Well, LeBron vs. Kobe would kill that. These two would dominate (each other), gesticulate (wildly), articulate (each dunk), contemplate (each move) and pronunciate (each highflying trip to the rack). And for real there is no stopping either one. They can do whatever they want whenever they want. They are both really that good and really that exciting. Kobe with his 81-point explosions and LeBron with his Jordanesque playoff games and triple-double trouble. But the most important thing about them is their will to win and make the players around them better. And just like Mike, they are doing it.

LeBron took a ragtag group of castoffs to the Finals. Retreads like Damon Jones, stiffs like Zydrunas Ilgauskas and underachievers like Donyell Marshall. Kobe has been getting to the playoffs with undrafted dudes like Smush, busts like Kwame and projects like Bynum. Could these guys get a little help, please? I’m sure they both would be battling in the champion­ship if they had some help. LeBron seems like a mainstay in the East and now that Kobe wants to be traded who knows where he’ll wind up.

There’s always been players like Nash, who come along and elevate the play of their teammates (Russell, Magic, Stockton, Isiah, Bird). But to do it like Mike, you have to not only elevate your teammates games, but you have to dominate yourself – as in physically, mentally and spiritually – by infusing your will to win into your teammates while at the same time making an undeniable impression that you are indeed the best player and athlete on the court. No easy feat. That’s why there’s only been one Mike. But if anyone can duplicate what he did, the overall greatness in every aspect, it’ll be Kobe or LeBron.

Kobe at 28 and in Lakerland is getting fed up. He wants that championship solo with no Shaq. Kobe is too proud to ride someone’s coattails and claim it as his own. He wants to be the star and have a supporting cast tailor made for him – hence the trade demands. Where will he end up nobody knows. But hopefully with some players to make an impact and a run at the title. And LeBron at 22 is playing remarkable averaging 26 ppg and almost 7 rebounds and assists per game. He’ll probably never average a triple-double, but who since Oscar Robertson has? As long as the Cavs maintain their advantage in the weak East and place some shooters around LeBron like Boobie Gibson, King James will have his shot at a champ­ionship. Because just like Kobe, he can put a team on his shoulders and his team through a playoff series like he did against the Pistons. Remember we just witnessed it and never mind the Spurs shutting him down, they were clearly the superior team. LeBron needs help. But also like Mike, he needs to step it up a little more. No excuses.

Kobe has three rings, but they probably matter little to him because he knows in his heart he was just Shaq‘s caddy. Think if Jordan came in and played with Bird or Magic, it just wouldn’t be the same as him doing it by himself with all dudes under him. Kobe never liked being Robin to Shaq’s Batman and LeBron has been solo since the jump with an assortment of second fiddles who never matched Pippen to his Jordan. Boobie Gibson is nice, but can he sustain that level of play for a whole year?

With Kobe making trade demands, his future is uncertain. But he knows Odom, Bynum, Farmar and Walton are not championship caliber teammates. Birth of these superstars must be surrounded by complementary players who can hit a shot. They need a Paxson, a Kerr, a Wennington. But also both of them need to take it upon themselves and make some of their teammates into those guys by inspiring confidence just like LeBron did with Boobie.

With Kobe and LeBron’s ability to get to the rack at will, take anyone off the dribble at anytime, play great defense and be the superstars that they are under intense pressure day in and day out, they are clearly the two best players in the league today. But as to who is the best, that is open to dis­cussion. For me, though, I’ll go with LeBron because he just led a similar Cavs team to the Finals while Kobe’s Lakers can’t get out of the first round.