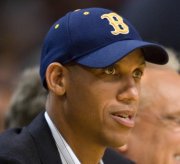 Reggie Miller can not only come back and play, but he would be successful without a doubt. Why? Simple. He can make open shots. That’s what the NBA is all about right now anyway. Give the ball to your stars and everyone else gets out the way. Reggie can get out of the way and be productive better than any player in the game right now. Heck, I can put a Celtic uniform on right now and get 10 points a game just by staying out of the way. The difference between me and Reggie, though, is my legs will not allow me to run back to the other end and move laterally. I am praying every night for a medical breakthrough with regards to new knees that make you feel like you are 25 again. But Reggie Miller can do it. He is one of the best conditioned athletes ever and he has not stopped being athletically tuned since his retirement. What most people don’t understand is you can never be in NBA shape unless you are playing the NBA game. That is the major hurdle for any returning player and the only ones I see right now based on weight and history of toughness are Reggie Miller, Charles Oakley and Scottie Pippen.

Reggie would fit in quite nicely with Boston. Can you imagine spotting him up at the three-point line. Players would have to leave him to help out on the Big Three. Pick your poison. If Doc Rivers puts Garnett, Pierce, Allen, Miller and Eddie House on the floor at the same time… Who do you leave? Obviously this would not be a starting lineup, but during the middle and end of the game it would be a nightmare for any defense.

I am rooting for Reggie, but I am also rooting for Allan Houston, who left the game much too early with a bad knee. Heck, why don’t the Celtics chase him too? Then they can add a few bruisers inside to go with Scot Pollard and Big Baby from LSU and look out Eastern Conference.

Reggie Miller is one of my favorite teammates ever and I personally think he should do it and help Boston in its quest to get back on the map. If he comes back, I predict he will play 20 to 25 minutes a game and average 10 to 14 points. If he stays at TNT, I predict he will be OK in that medium as well.

That’s why I say… Do it Reggie! You only live once so keep living and playing the sport you love and just maybe the Celtics can shock the world.