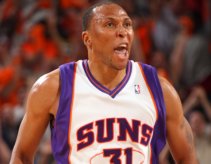 After hearing about Shawn Marion‘s latest trade gossip and now a request that’s it’s time to move on, I just think this is the same song and dance over and over from All-Star players when they don’t want to step on toes if the trade doesn’t happen. I’m underrated and underappreciated, I’m tired of hearing trade rumors, I can’t get an extension, etcetera.

Morpheus: Have you ever had a dream, Shawn, that you were so sure was real? What if you were unable to wake from the dream, Shawn? How would you know the difference between the dream world and the real world? If “real” is that you play with a two-time MVP point guard, and that you are the highest paid player on the Suns then “real” is electrical signals your brain cannot interpret. What are you waiting for? You’re better than this. Don’t think you are, know you are. Come on! Stop trying to get a trade and work on getting the Suns a championship!

Matrix: I thought it wasn’t real?

Morpheus: Your mind makes it real

Matrix: So if I leave Phoenix, my career dies?

Morpheus: You cannot prosper without Phoenix. You have to see for yourself what the Matrix is. The Matrix is your game, Shawn. But when you’re inside the Matrix, you look around, what do you see? You are the highest paid player on the Suns, you just received a seven-time All-Star in Grant Hill to play alongside with, and Steve Nash is still your point guard.  You have to understand, you are not ready to be unplugged. And you are so inert, so dependent on the team that Phoenix will fight to protect it. If you are not one of us, you are one of them. What you know you can’t explain, but you feel it. You’ve felt it your entire career, that there’s something wrong outside Phoenix. You don’t know what it is, but it’s there, like a splinter in your mind, driving you mad. You have the look of a man who accepts what he sees because he is expecting to wake up. Ironically, that’s not far from the truth. I’m trying to free your mind, Shawn. But I can only show you the door. You’re the one that has to walk through it. [Morpheus mumbles, “You better walk through that door Monday for training camp.”]

Matrix: Why do my eyes hurt?

Morpheus: You’ve never used them before. And there is a difference between knowing the path and walking the path.

Matrix: What are you trying to tell me? That I can’t coexist with Kobe?

Morpheus: Shawn, I’m trying to tell you if you couldn’t coexist here with this perfect system for you then there is no place you can. (Especially the triangle offense or Jerry Sloan) Your game (The Matrix) is the world that has been pulled over your eyes to blind you from the truth. You don’t have to create your own shot here with Nash spoon-feeding you and Barbosa and Hill slashing to the paint getting you dunk after dunk. What makes you think you will get a shot up when Kobe’s shooting 30 times a game. And what’s better… Running the floor next to Andrew Bynum or Amare Stoudemire? You’ve been living in a dream world, Shawn. Don’t wake up!

So after taking the tap off the phone (teasing), I encourage the Matrix to listen to the immortal words of Morpheus (the architect of a style and system that every athletic player loves to play).

Playing in the NBA is the ultimate dream job. Take my advice: don’t wake up! If you do, you will be real disappointed that you took the red and blue pill (if I got any Matrix movie fans!) because that one thing you won’t touch as much in L.A. or even Utah is the pill.

But if you won’t take my advice, speak to Neo (Joe Johnson). Everything worked out fine for him… Or did it not?