Marion should want to stay in Phoenix

Marion should want to stay in Phoenix 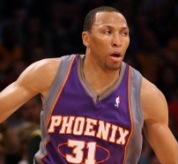 NBA training camps are about to open and this is the time when positive attitudes and thoughts of making the playoffs and winning championships for every team are on equal footing. I know we can say certain teams have no hope, but after watching the New York Mets choke away a seven- game lead with 17 games left in the season and the Colorado Rockies win almost every game to force a one-game playoff with San Diego, I say everyone has a chance before any season.

The process of getting to the Finals and winning the championship with all the parameters a team deals with is the key. To win consistently a team must have very good players, good health, very good reserves, great coaching, great fan environment… But, most importantly, great chemistry.

Bad chemistry can not only destroy the team, but eventually hurt the individual player. The biggest chemistry story going on now is the unhappiness of Shawn Marion with the Suns.

Marion is the most versatile player in the NBA. He can guard four positions, he scores over 18 points a game, grabs double figure rebounds and usually is among the leaders in steals and dunks. And Marion does all this virtually without any plays being called for him. Marion probably is the most unique basketball player I have ever seen. He has endless energy and plays every game like it’s his last. I have never seen him take a night off. I can only say that about a few players. Karl Malone, Michael Jordan, Larry Bird, Magic Johnson or Isiah Thomas come to mind.

Marion has made the All-Star team four straight years, he is a member of USA Basketball. He is featured in Nike Basketball advertisements with all the other excellent players in the league. He is widely regarded as one of the most exciting players in the league. But yet he has grown tired of the constant trade rumors involving him over the last few years.

Marion is no different than a lot of players past and present that believe they did not get their “just due” in terms of respect from their current team.

This is a no-win situation for the Suns and Marion.

The Suns need Marion because he provides them with stats they don’t need to manufacture to go along with great defense and rebounding. Shawn needs the Suns because they give him an environment to be extremely productive, being surrounded by two great players in Amare Stoudemire and Steve Nash and playing in a tailored-made offensive system for him.

Once a player retires, he can look back on a decision he made or forced and undoubtedly admit, “I wish I had not done that or asked for that.”

I recall the time I asked George Karl to trade me when I was a member of the Seattle SuperSonics because he was diminishing my role. Ricky Pierce and I had been the go-to scorers on a team that was winning 50 to 55 games a year and yet I had a difficult time understanding why he wanted to change and reduce my minutes and role.

I knew Gary Payton, Shawn Kemp and Derrick McKey were becoming the main options. Why? Because I helped groom them to be. But ego and pride got in the way and two years later, after being traded to a young team in Charlotte, the Sonics went to the Finals and I was spending a year in Greece saying, “What if I didn’t ask for the trade?”

I came back to the league, but never made the Finals.

Marion is facing that same scenario, He does not have to look far to see how difficult it can be when you leave a successful team and take residence somewhere else. He just needs to call Joe Johnson, who made the decision to leave Phoenix and sign with Atlanta and now is trying his hardest to just make the playoffs with a very young and inexperienced team.

Marion’s agent should be showing him all the positives of wanting to stay and finish something he has been a major part of instead of wanting to leave and quite possibly getting great stats, but failing to win at the rate he has with the Suns.

The NBA is a business and if Kareem Abdul-Jabbar, Oscar Robertson, Wilt Chamberlain and Shaq can be traded then anyone can. Heck, we can in essence say the greatest player of all time was traded indirectly and that’s Michael Jordan to the Wizards.

Marion’s Agent and friends should be laying it out like this.

What’s the most important stat to a player? Minutes. OK, you played over 3,000 and led the team in that category.

What’s the one individual award players like in the regular season? All-Star status. Well, you have made it four straight years.

What’s the newest individual award players feel proud of? USA Basketball. Well, you are a member.

The question Marion has to continue to ask himself is how does he keep “myself” in position to win a championship and how can he overcome and learn to understand that basketball is a business and no matter how good you are someone might think the other player could be a little bit better. That’s the business of athletics in general and historically this has been the hardest part for prideful athletes to deal with. But after listing all the positives, there is no doubt he should want to stay a Phoenix Sun and his agent and friends should be screaming this to him daily, because when it is all said and done the Suns could be his best chance to win a title and add one more positive to an already fantastic and a potential Hall of Fame career.