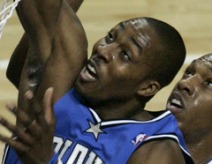 Two players to look out for in the upcoming season. Dwight Howard and Luol Deng. Both of these young players are ready to break out and reach their potential. To become superstars and lead their teams to glory. They’ve put in their time, they’ve worked on their games and they’ve earned their props. But now it’s time to take it to the next level. Potential is one thing but desire is another. And if both these players desire to be the best then they can be. All the physical tools are there.

Dwight Howard, the man child, is ready to dominate. When Orlando took him over Emeka Okafor, a lot of people scoffed. Why take the raw potential over the finished product? But now four years in, you can see why. Okafor is a good player, but he can never reach the heights Howard can. He is the next great big man. He can have a Shaq or Duncan-like effect. When he gets it into his mind, he can be unstoppable. The evolution of this franchise center is unfolding right before our eyes. He gained valuable experience playing with the National Team and it is right to defer to Kobe, LeBron and Melo. But this season with the Magic he has to take over and be The Man. He has to want to put the Magic on his back and carry team. The man who teammates call Thunder is ready to slam the rock at will on any who dare to stand in his way. They robbed him at last year’s slam-dunk competition just because he’s big. But for a big guy he proved he can get up with all the high-flyers. The sticker dunk was awesome, but Michael Jordan and them didn’t want to give any props. It doesn’t matter because Howard is ready to take over.

The Chicago Bulls picked up Ben Wallace to push them over the top, but the player that really needs to step up for them to get to the championship is Luol Deng. The 6-foot-9 Deng averaged 18.8 points and 7.1 rebounds last year. But to reach the next level he needs to up those average and become the prime-time player he can be for his team to win it all. With his mid-range game and silky slashes to the hoop he should be able to do it. He must add the one-on-one ability that will enable him to create his own shot to really advance his game. If his offseason work paid off he should be unveiling those new one-on-one moves this year and prove he can be a crunch time player for Chicago. All the pieces are around him, but now he needs to step it up.

Both Howard and Deng are ready to take the next step in their careers. They both have to want it, though, because in the league if you don’t bring it every night then you might as well call it in. Because this is the NBA. The best athletes in the world. Hopefully, both these humble and personable players can step it up and become superstars. But they have to show that fire and have the will to be the best at what they do. 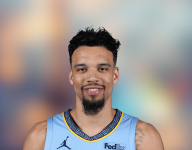 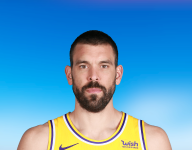