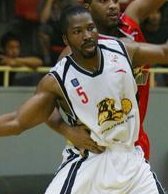 Greetings to all the people giving well wishes! And wow the fellow Bantus! No shakin’. I no sabi wey d 9ja people go dey plenty. How far? That’s just a Nigerian style greeting, so no accusations of African cursing on the net. Moving on…

I knew in advance this blog’s focus was to give a real life outlook on that D-League experience with aspirations of NBA… Whatever. The thing is I have to force myself to be patient because I have a plethora of stories and what I like to call useless info cascading through my brain. Like when I was almost killed in Algeria with the Nigerian National team, twice! I think the coolest part of that was Ime Udoka catching and quickly dispacthing an Algerian attacker from behind me. (That boy ain’t close to a punk!) Or the day I got cut from Detroit on the day of travel for the first regular season game. (It was not as dissapointing as it was hilarious). But rather let me give the typical NBADL blah… And hopefully transition slickly to the cool basketball stories… pay-shents.

(Feel free to skip to ‘Rhetorical Questions’ for the good stuff and avoid the D-league rantings).

Oh. Right. D-League. Um… Me, 29. Everyone else, 12. That’s just to give an idea how eye-rolling this is for me. I mean, I try. I really do try to be one of the guys but DAYUM! You can’t tell some of these guys nothing. Do you remember I mentioned the two reasons a guy might do this? Do you really believe some of the participants in this basketball “The Price is Right” are doing this for a call up? The funny thing is… Yes! And they play with the wreckless abandon of a bull in a rodeo to show it. You try give a guy some of the knowledge you’ve attained over the years and try to get them to slow down, relax, be smart. Not only is it ignored with utter basketball daftness as if the NBA has lost half its players to heart attacks and are now in need of 6-foot-3 power forward that plays from a three-point stance, sometimes you are met with juvenile insults.

Now I’m in the position where it’s a battle not to get perturbed even though I’m not playing for a call up (we’ll discuss that later) so local consequences are of no consequence to me. However, I can’t be dumb. The fact remains, there are those playing for the whopping $3,000 a month that have absolutely nothing to lose. On the other side of the Kobo, I have tons to lose. For me, it is quite literally a million-dollar investment. Overseas teams are just as critical as NBA teams. My father used to warn me all the time, “Ukpanna majue, o zuru ike na ahuo nnunnu.” It means: the grasshopper that won’t stop jumping will find rest in the belly of a bird. And I’m the dad-gum grasshopper. When a brotha get froggy… I can’t jump.

The other day in practice a wired-up (teammate) (I’ll try not to use names when it’s a negative thing. I have no intention to raze, rather inspire with experience) slapped the ball in my face when I stopped play because we were in the wrong spots. “Dude! Chill!” He looked at me and what do you think he said? All he had to say was “my bad.” Needless to say, he didn’t. Sorry is a hard thing to say but when it’s mastered, it’s very dissarming.

CJ Watson is probably the only name that comes to mind when asked, “who doesn’t belong here?” He’s just too damn good. The other name that comes to mind… Ha ha, you guessed it. But not for the reason you might think. Doing this still remains a bit moot in my mind but it’s more along the lines of lifestyle. I’m not a rap junkie. I don’t wear baggy flamboyant clothes. My southern vocab slang is good, real good. But that’s due to years of practice. To this day, it remains fake. I was raised in the United States, though I am Bantu by way of Nigeria. My entire family, from my parents to my wife, is Bantu. I speak five languages and think in all five (a fact I was just made aware of due to Trent Strickland posing the inquiry). And I am an education advocate. In short, I don’t belong. Never have. No matter how hard I try. I’ve done better by just not talking to anyone. Kind of like putting a wolf in a hen house and the head of the farm are the foxes monitoring the wolf and his behavior. It sucks. And the hens know it… So they just peck away and I can’t eat the… I mean the wolf… Sorry, the wolf can’t eat the chickens because he wants the privilege to one day join the pack. So in this case, laying low would be the words of the day.

I think this is the fun part of the blog…

First of all, I’m a weirdo so I have these blanket assesments that are almost always never true… Huh? But they serve the purpose of satisfying my over-analyzation of the most minute details and making e sound smart. (Did I say that outloud?) Here’s one: Almost all questions a human being can ask are rhetorical, because the answer is obvious to someone or the person asking is ignoring the obvious. See? Not totally true but sounds good and makes me feel better. Why is 30 considered so old in the NBA? Why would a multi-million dollar entity feel they need to tell one insignificant person something to jade his/her perception of the situation? Why is this simple game made to seem like rocket science? The list goes on.

Here’s a pointer that will assist in answering all the questions. Don’t believe the hype. I was told I was too old to be considered for an NBA team this year. Yet I can give countless examples of why the people saying that are just answering for convenience. Of course, no one has ever come to the NBA for the first time after a great overseas career at 27-plus years old. And me being the geezer that I am, I see why Charlotte opted for the spry Derek Anderson. Am I saying I am better than Derek Anderson? Who cares? D.A. is an unbelievable asset to Charlotte and he is underpaid. They’re lucky to have him. What I’m saying is; don’t say that. Just say… Uh no. You suck. A lot easier to assess one’s future with the truth. The truth is age really doesn’t matter. What matters is, how many miles do you have on your legs? And how well have you taken care of your body? Seeing as I’ve transtioned to this raw organic diet thing, I see the human body wasn’t made to age quickly.

Skipping right to the way people complicate basketball. I was going yo use Matt Carroll and Ime Udoka as examples of how players are over-analyzed to a point when people can’t even tell that someone is just good. but after seeing what Kelenna Azubuike is doing… I had to use him solo. Geez! Who the hell scouted that guy out of college to justify him being undrafted? Someone tell me if he was a first-round pick doing what he is doing now at this age he wouldn’t be extended a five-year, 60 million contract. That SOB is killin’! I mean everytime I look at the stats he’s got 20-something. Nna maaaaan! Pya ha utali! (He knows what that means).

Or how’s this for complicating the game. Did you see in college basketball they moved all the players up a spot on the lane! Are you kidding me? I mean, seriously, how ass-toundigly absurd is that? Here’s a thought… Call a foul. I bet if you call over the back a few times guys will hate fouling out so much they’ll stop doing it. Thank you, Dalai Lama. I have transcended the constraints of the daft. Sorry, not to be rude. But c’mon…

I think people may have gotten the wrong idea on this blog, though. I’m by no means mad at the NBA. It is what it is. A machine. I love everthing about how the NBA works. And David Stern? I love him. I mean, I love hat dude. When they talk about Warren Buffet and Bill Gates, Mike Dell etcetera… They should include my man. Say what you will but when they offer a class of Stern Tephlon Chemistry 101, I’m there dude. (Did you see how he was talking to Congress when they charged him up about steroids and the NBA? Classic. Dare I say? Brilliant.) Anyway. I can’t be mad at something constant because it doesn’t benefit me. It just hupas because, to date, playing in the NBA (at least for a season or two) was my long-term goal. So the goals have simply transitioned slowly.

As for individuals in the NBA that influenced my positively or negatively, I don’t wish to bash anyone. I think all people are good at heart. I’m sure the guy I talked about in the first blog meant nothing by what he said. And I’m sure if he knew how it affected my play he wouldn’t have done it. For that reason if the outcome is fruitful, I will gleefuly divulge names. If it is not, I just won’t. See, I read other blogs and I rarely see the point. This blog is not, in essence, about me. It would be boring if it were. The point is to inspire. I want someone to inspire me to do something fruitful outside of myself in experiences I can relate to. And believe me, seeing as how I am what my wife calls a quasi-servant, my life/journey as an NBA “eh…not quite” D-Leaguer, everyone can relate to.

Here’s an example. A fan I saw at the Rockets/Lakers game told me something even more surprising than the fact he remembered me, if it’s true. He told me, every player ever to have a 30-plus point game in the history of the Pepsi Pro Summer League signed an NBA contract, until this year. Yep. Yours truly is now the first to do something. That’s just funny. Sorry it is. Ryan Hollins told me something I could barely make out over his laughter. He said I’d either be blackballed or find a career in writing. To that I say, when you’re out with a beauty queen, what’s better? To be blackballed or blueballed? At least the first assures you of the outcome.

The whole thing about basketball guys complicating the obvious is still in my mind, so I leave you with this skit that will be plastered in my mind if I don’t tell it. I call it “El Elefante en la Habitacion que Nadie Quiere Ver.”

Who says: Anyone see that elephant in here?

What retorts: What elephant? I don’t see an elephant. Do you?

How responds: Nah! No. Uh Uh. Nope…Unless of course you do. In which case I do too.

How and What: Phew! Thank God. We thought we were crazy.

What: That thing is huge!

What: Well, of course. By huge I meant small. 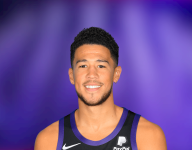