Why Skiles got canned

Why Skiles got canned 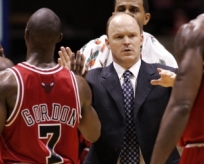 The Chicago Bulls are in the spirit of giving Christmas gifts early and Scott Skiles was the only participant that didn’t like the gift, at least that’s what I assume. But then again, Skiles once left the Phoenix Suns in the middle of the season, so maybe he is happy to part ways with the only squad that was willing to bring his career back to life after he literally quit on his previous team – which is something only reserved for Larry Brown to do.

What I have heard prior to his firing is he has an inability to communicate with his players on a consistent basis and that a number of players had no idea what was expected of them on the court. My experience tells me that Skiles lost some enthusiasm and the players, as they always do, noticed and complained behind the scenes – which cost Skiles his job.

The overriding factor on coaches losing their job during the season is interviews with the players. And I will bet my bottom dollar that John Paxson had no choice because of player complaints – to go along with his own perception that this team was underachieving with Skiles at the helm.

Paxson is not immune to these problems either. I wrote a story already about the drafting of Ben Wallace clones (Tyrus Thomas and Joakim Noah) the last few years and holding on to Luol Deng when they could have had the best player on the planet in Kobe Bryant. Paxson showed his weakness by allowing Skiles to encourage him to build a team of hustlers and role players and not pull the trigger on Bryant or Kevin Garnett. I suspect Skiles wanted nothing to do with star players that would challenge his authority and compromise his theory that no player should dominate the ball. Well, I think it’s obvious where that gets you and that’s fired, because you need stars to win and the Bulls presently have none.

The Bulls did not win six championships with hustling role players. They won with megastar Michael Jordan and two superstars in Scottie Pippen and Dennis Rodman. The problem I have with Paxson is that he is thinking so opposite of how he won titles and this has him in line with being next to go.

Now let’s see how fast those Kobe for Luol Deng and others come to life again, huh?

By the way, Skiles might not be alone getting canned this season…

Mike Brown (Cleveland). Was exposed by Gregg Popovich last year during the Finals and seemingly has struggled to get this team to perform consistently since that sweep.

Mike Dunleavy (LA Clippers). Yes, Elton Brand is out. But this team should not be a 9-17.

Isiah Thomas (New York). Dolan is on record as saying Isiah will not be fired, but he has to get this leaderless team playing with passion or Dolan will be forced to go back on his statement of support. I am pulling for Zeke to get through this, but unfortunately his players are showing no heart, which is extremely disturbing for any fan.

Let’s give a pat on the back to the coaches that were on the hot seat, but are now Coach of the Year candidates.

Mike Woodson (Atlanta). Has done a brilliant job of molding this young team around superstar-in-the-waiting Joe Johnson. Woodson also might be one of the best coaches in the league at drawing up plays in crunch time, which is huge for a young team.

Flip Saunders (Detroit). Had the Pistons gotten off to a slow start, he would be gone. But give Saunders credit… It is not easy to coach a team laced with veterans who have won a championship. He seems to be in control and working hard at communicating better. Check out his interaction with players as they walk to the scorers’ table before games.

Nate McMillan (Portland). Along with Woodson, he is the front runner for Coach of the Year. I felt Portland would surprise this year without Greg Oden, but not to the tune of 10-game winning streaks. Nate has convinced this team to play extremely hard and allowed Brandon Roy, a second-year player, to lead them. The rest of the league better get use to this team dominating like this in the future once Oden is in uniform.

Doc Rivers (Boston). Rivers can communicate but most importantly he is allowing the three stars – Kevin Garnett, Paul Pierce and Ray Allen – to coach on the floor. That is extremely difficult to do for a lot of egomaniac coaches that would love to be in Rivers’ position right now. If Larry Brown coached this team, I would bet that he would run plays for Kendrick Perkins in crunch time just to keep the stars humble. Rivers understands why he is 22-3 and ego will never make him feel otherwise.