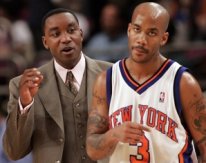 New York, Miami, Los Angeles, Chicago, Memphis and Minneapolis. All of them have one thing in common as of today: they are all in last place in their respectives divisions. The T-Wolves are the only team that should be expected to be in that neighborhood, with their former longtime franchise icon Kevin Garnett getting traded to the Boston Celtics during the summer for Al Jefferson and others. Jefferson is a good, nice young player but he’s obviously no Garnett.

The Chicago Bulls rewarded coach Scott Skiles with a gift-wrapped pink slip. It was apparent that the chemistry was horrendous, that the Bulls as a team virtually stopped playing for him. Who will take the reigns as a permanent head coach now is anybody’s guess. The assistant coaches have no head coaching experience, although Boylan will probably man the post for this year.

The Bulls, led by Luol Deng and Ben Gordon, were expected to contend for a championship, much less just win the Central Division title. What else has happened with them? Well, the Kobe Bryant trade rumors involving everybody from Ben Wallace, Kurt Hinrich and Gordon didn’t help. Nor did the contract extension talk breakdown do much for team morale. The fact that Wallace is a mere shell of his old intimating self is another reason for the struggle. The part that’s heartbreaking is that the Bulls knew they had to overpay to pry Wallace from the Detroit Pistons, but their thinking was that he would be good and strong for at least three of the four years in his contract. As it’s turning out, he’s a bust at the tune of 14 million per year from the first year on.

I think John Paxson may have dropped the ball on the past couple of drafts. No way should he have traded LaMarcus Aldridge for Tyrus Thomas. And to compound that, why would he draft Florida’s Joakim Noah, who is a slightly version (but not better than) of Thomas, when he could have drafted Spencer Hawes. He may not be ready just yet but in two years he’ll be a much better player than Noah, who is really not much more than an energy player and not a highly skilled one.

With Skiles gone, another coach will more than likely inherit the same roster; the onus will be on the players to “step up”, as Gordon was quoted as saying.

The raucous boos have turned into deafening chants of, “fiyah Isiah”. The natives have gotten so restless that they’re even being asked to leave the arena if they become too abusive. Some fans have also been warned or asked to leave the arena for rising up signs that security thought to be inappropriate. One man has blatantly taken to having a pink 8-foot by 6-foot cardboard sign made up with lines drawn on it for folks to sign the petition to have Thomas fired immediately.

But the Knicks have been a bungled mess from the start for a myriad of reasons. First, there was the lost lawsuit involving Thomas and Anucha Brown Sanders to which he lost on behalf of the organization to the tune of $11.5 million. Zach Randolph missed four games because of the death of his beloved grandmother. Stephon Marbury and Thomas had a major falling out over the team’s performance. Some have even speculated that fists flew in the air literally and figuratively en route to Phoenix to play the Suns. Marbury left the team and went back to New York, only to fly back the following day after missing the game. Then he was voted not to play by his teammates and Thomas ignored and play Marbury anyway.

Then Marbury’s father passed away after having a heart attack while watching a Knicks game. No, it hasn’t been pretty or pleasant with this Jekyll and Hyde team. If rebounding machine David Lee could get an entire summer with former Warrior great Chris Mullin, he would be an All-star.

Injuries: Dwayne Wade had knee and shoulder surgery and has missed a great part of this season. He’s now back but is still rounding back into All-star shape. And Alonzo Mourning was recently carted off the court with a torn patella tendon that looks a career ending. This was going to be his last year anyway, but as proud as he is, this is not how he wanted to go out.

Old team: Shaquille O’Neal is a shell of his old ferocious self. Age, weight (although he’s in much better shape than in times past) and personal problems are taking its toll. Enough said there.

Lost parts: The loss of Jason Kapono to the Toronto Raptors, James Posey to the Boston Celtics and Eddie Jones to the Dallas Mavericks is taken more of a toll than Pat Riley anticipated. Either that or he fell asleep at the wheel because all of those teams are contenders of some magnitude. And although Antoine Walker fell out of favor also with Riley, he was still a skilled player. The replacement parts of Smush Parker, Ricky Davis and Daequan Cook haven’t panned out too well.

Confusion in the ranks: Every year it almost seems that Riley finds a whipping boy to spew venom towards. This year it seems to be Parker, who has been told to stay away from the team until further notice. He is however getting paid in full to do so. It must be pretty nice to earn 2 million big ones doing virtually nothing at all. As Don King would say, “only in America!”

Well, the Clippers should get a pass being that they lost their best player in Elton Brand during the summer to a tragic knee injury. Not to mention Shaun Livingston on going rehab to his devastating knee injury that would’ve probably ended a lot of careers. But, for the sake of argument, I won’t harbor any excuses because as we know these guys are highly paid professionals and their jobs are to make sure they can step in when stars go down and what they do.

But on the bright side, center Chris Kaman has bounced back very nicely after last year’s dreadful season, when he inked a long term 50-plus million dollar contract. And if Brand does make it back this season and is close to at least 80 percent, the Sacramento Kings will switch places with the Clippers for last place in the Pacific.

Where’s Elvis when you need him?

They fired coach Mike Fratello a few seasons ago because he couldn’t advance in the playoffs. But they haven’t been to the postseason dance since then. Jerry West retired and their new coach, the much coveted Marc Iavaroni, isn’t fairing much better than last year’s coach and current director of player personnel Tony Barone Sr. What this team needs is more toughness and stability at the point. Rookie Michael Conley Jr., clearly isn’t ready to assume the reins and Kyle Lowry has been injury prone. That leaves the once mighty Damon Stoudamire to run the show. They have talent in Rudy Gay, Pau Gasol and sharpshooter Mike Miller. Also there is Darko Milicic and Juan Carlos Navarro. Perhaps if they were in the Eastern Conference’s Atlantic Division they would be at the top of the heap.

This team is probably going to be a mess for a number of years. The ghost of Garnett will hover over the Twin Cities for as long as Kevin McHale is handling the steering wheel. (At press time) this team is a frigid 3-21 with more damage sure to come as they embark on a trip that includes the likes of the New Orleans Hornets, Portland Trail Blazers, Seattle Sonics, Golden State Warriors and Los Angeles Clippers. They will be crashing the lottery once again but even if they were to get the first pick and it turns out to be Michael Beasley out of the University of Kansas, is he any better then the ever-improving Jefferson. The collection of talent is promising, led by rookie Corey Brewer, Ryan Gomes and Randy Foye (who always seems to find his way to the injury list), but years away from maturity – especially in the Western Conference. If they couldn’t do it with Garnett playing his heart out, they sure won’t be able to do it with these guys running up and down the court any time soon.