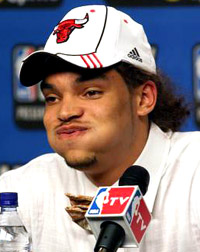 Will someone please tell Chicago Bulls rookie Joakim Noah to shut up! I have never ever heard a rookie talk so much and be involved in so much controversy within the locker room. Noah, rookies are meant to be seen not heard. Shut up will you and learn.I blame this on the Bulls veterans for even allowing this rookie to feel like he is a spokesman. I remember when I was a rookie I was scared to open my mouth to say hi. I had players like Sam Lacey, Ernie Grunfeld, Leon Douglas, Phil Ford, Reggie King and Joe C. Meriweather who would slap me upside the head if I even breathed too loud.

I had to deliver a newspaper and donuts to those guys every day before they left the hotel room for practice. I only asked questions, I never suggested and I never talked loud enough to drown out their voices in a conversation.

Because as I told Scott Burrell (a rookie when I played with the Charlotte Hornets) when he asked me one day out of frustration, “Eddie, do you know everything?” I said, “No, Scott. You just know nothing!”

Scott and I are very good friends to this day and he always reminds me of that comment I made to him and today he understands why.

Rookies must learn, this is another level. Noah, I don’t think anyone has told you yet but you are not at Florida anymore. Yes, it was nice you won back-to-back titles. And yes, it was nice your team got along splendidly.

Guess what, that’s over and done with. Your reward was being drafted high and garnering a ton of attention, but now you are trying to earn the real deal contract. That is the contract that says you performed well at this level because until now the paycheck you are banking every month is based on what you did at Florida.

The Bulls don’t need a rookie explaining why he and Ben Wallace had an argument, which seems quite silly when you think about it, because Wallace has paid his dues and has a championship to boot.

Something tells me Noah feels like he knows how to win since he has two NCAA titles. Well, let’s put that team back together at this level and see where it gets you.

Here’s my advice to Noah: Just use that energy to keep improving and leave the talking to the veterans and listen because it’s called respect! Oh and yeah, please shut up.