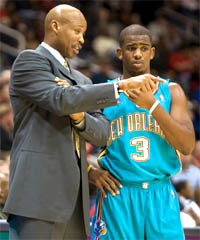 Yeah, Chris Paul is great. But give Byron Scott a lot of credit.

The New Orleans Hornets are the gypsies of the National Basketball Association. They have relocated twice in the last few years and have adjusted splendidly. I felt the Hornets would be a surprising team, but no one thought that they would be fighting for the best record in the Western Conference halfway through the season.

I know that Chris Paul has been getting the bulk of the attention for this huge turnaround, but before I start with Paul, I want to look at the marvelous job Byron Scott has done in improving this team with everything they have had to deal with over the last few years.

Scott, who is a disciple of Pat Riley, Magic Johnson, Larry Brown and Rick Adelman, has taken a little from each and created a consistency at the coaching position that has gone unrecognized  for a number of years.

Remember this is the same coach who took an overachieving New Jersey Net team to the NBA Finals twice and was promptly fired because rumor had it he was not paying attention to detail. Well, the Nets have not sniffed the Finals since and are presently sitting in the eighth position of the Eastern Conference 15 ½ games behind the Boston Celtics.

George Shinn, who has been much maligned as an NBA owner, snapped Scott up in a hurry and he has brought stability and professionalism to a franchise that was becoming the laughingstock of the league a few years ago.

Scott has been able to do it because Shinn has allowed him to control his environment and not mettle. Scott has encouraged and made some decisions that some initially frowned upon or wondered why, but as we are seeing the Hornets are making a rise that has skeptics unsettled and looking for reasons.

The first thing Scott did was go with his instincts and beliefs on whom he would feel comfortable sitting next to him. Rarely in the NBA nowadays do we see more than one ex-player sitting next to a head coach? Byron Scott has three in Kenny Gattison, Darrell Walker and Paul Pressey.  What is also significant is that Scott was not intimidated about hiring coaches that did not have to be taught about the nuances of the league. These individuals played and have a desire to become head coaches in the future.  This means if Shinn wanted to make a change he would not have to look far.  Riley, Brown and Adelman were also coaches who were not afraid of this situation and now you see through the power of this association.

Most coaches in this league would never put a potential successor next to them and definitely not three, but Scott understands that winning consistently will keep his job anyway… So why not go all? It has paid dividends for him.

It definitely helps to have a Chris Paul, but again here is the beauty of Scott remembering the greatness of Magic Johnson. He has allowed Paul to be great because, believe me, there are some coaches in this league that would not allow Paul to control this team as he does and the numbers we are seeing might not be part of his portfolio.

Paul runs every fabric of this team. I saw him a few weeks ago dress down three veterans in the span of two minutes and they gave him eye-to-eye contact and followed instructions. Why? Because they see a player that is allowing them to have career years and brings it every night with superstar abilities – which  has him pushing two- time MVP Steve Nash for best point guard in the league.

That might be no surprise. Paul has purposely studied Nash on film and considers him the model in how he should play the game.

Although Scott has the unbelievable Paul, he should be hailed for convincing Peja Stojakovic to bolt Sacramento. Also, David West has developed into one of the best low-post threats in the league.

But the biggest coup and the main reason this team has elevated itself into the super team category so far this season is the theft of Tyson Chandler from the Chicago Bulls. I have personally loved the abilities and athleticism of Chandler ever since he came in the league. It was easy to get down on him because he seemed to not care at times and he could not stay healthy, but when you think about it we were talking about a high school kid. If you discount his first three years in the league, which should be for growth, Chandler has missed only 14 games and has averaged close to 11 rebounds a game in the last four years.  Chandler has now become a confident double-double machine that seems to get more dominant with every game.

I am on record as saying I did not agree with the swap of signing Ben Wallace and trading Chandler and now the Hornets are reaping the benefits of your impatience.

The big challenge for the Hornets is to hope that these four key players will continue to flourish and hopefully find a way to get role players Bobby Jackson, Morris Peterson and Jannero Pargo to start shooting better than 39 percent as a trio.

It’s important because the Hornets rely on field goals and limiting the opposition’s possessions with their great defensive rebounding to keep the game close so Paul can dominate crunch time, which he has done better than any player in the league the first half of this season.

If the Hornets start to struggle in those areas, they better find a way to get to the free throw line more often because they are dead last with only 19 attempts a game.

All that said, this is one of the most exciting teams with Chris Paul and I believe with good health that they will grab a top five seed and be a tremendous problem come playoff time!