Mavs have now become the Suns of old

Mavs have now become the Suns of old 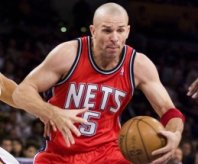 The Dallas Mavericks have now joined the party that the Lakers and Suns started a few weeks ago. Although I love Jason Kidd and he will undoubtedly make the Mavericks a more focused and tougher team, I don’t think it will put them in the rarified air of Phoenix, Los Angeles and San Antonio and for one specific reason only… They still have no interior offensive threat that will get them consistent inside points and force teams to double team, thus allowing Dirk Nowitzki and Josh Howard to flourish.

Kidd will definitely get them better shots, but the question is… Will he still allow them to get more possessions? Yes, he is probably the best rebounding pure point guard in the history of the NBA and a walking triple-double threat every time he hits the floor, but losing DeSagana Diop in the deal has effectively taken away a long defender and a rebounding asset the Mavericks will need against the Lakers, Suns and Spurs.

Erick Dampier will have to really step his game up to levels we have not seen and that scenario must have Avery Johnson worried. Brandon Bass has been a nice surprise, but they cannot count on an unproven player come playoff time – especially against Tim Duncan, Shaquille O’Neal and Pau Gasol.

The Mavericks have now become the Phoenix Suns pre-Shaq. They will have to up-tempo the game to crazy levels to stay out of half-court situations.

Case in point… Who will Dirk Nowitzki guard on the Suns? They use to hide him on Shawn Marion, but that will not work on Grant Hill or Boris Diaw because both can take him away from the basket and make him defend against dribble penetration. Plus it effectively takes him off the defensive glass, thus making them vulnerable with only Dampier to rebound. Avery will have no choice but to put Dirk on Amare or Shaq and that scenario spells trouble for the Mavericks.

The same applies to the Lakers with Andrew Bynum and Pau Gasol with Lamar Odom at small forward. Avery will have to guard Bynum with Dirk because there’s no way can he defend Odom. The Spurs don’t create that much of a problem with only Duncan in the interior, but San Antonio will offset it with the great defense Bruce Bowen plays on Dirk.

Dallas will now have to rely on fast pace and quick shots to have any chance against not only the three teams I mentioned, but the New Orleans Hornets and Utah Jazz as well.

The Mavericks and the Warriors are now like mirror images and I don’t think either has the edge against the height and strength of the top teams in a seven-game series. But any given night, when they catch fire, they are going to look awfully good.

If the Suns have admitted that form of ball is pretty but not conducive to a championship. Why would the Mavericks take the same approach?

I must admit that it will be fun watching it all develop because Jason Kidd is the real deal on both ends of the court.

Welcome to the Wild Wild West.