Cavs better, but still will not beat Boston or Detroit

Cavs better, but still will not beat Boston or Detroit 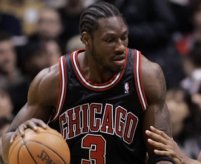 OK, so I would hope that all the Chicago fans that blasted me a few years ago when I wrote about the Bulls making a mistake by signing Ben Wallace would please apologize. Everything has virtually come true about that article. Wallace did not fit in and Ben Gordon and Luol Deng overpriced themselves and passed up good deals because they were looking at the Wallace contract. Now the Bulls are back to rebuilding and Wallace moves on to a contender. Guess what? Now you will see Wallace play like the Wallace of old with a legitimate center in Zydrunas Ilgauskas and a great player in LeBron James.

Joe Smith will help also in the interior. He is smart and steady and will be a good influence in the locker room. But the real find is Wally Szczerbiak. LeBron now has a consistent shooter that is not afraid to take the big shot and will be extremely physical, which automatically makes the Cavaliers the most physical team in the league.

Does that translate into another trip to the Finals? I don’t think so and mainly because they still don’t match up defensively with Boston and Detroit. Larry Hughes, whom I also wrote about as a desperate signing by the Cavaliers a few years ago, was their best perimeter defender and now they will be hard pressed to guard a Paul Pierce and Ray Allen combo and a Chauncey Billups–Rip Hamilton duo as well.

The Bulls have now backpedaled to where they were when Michael Jordan retired. Patience should have been preached, but the Bulls seem to be back to square one after giving up on Eddy Curry and Tyson Chandler a few years ago.

The Sonics are moving out of Seattle and creating a new identity around Kevin Durant. I really like the way PJ Carlesimo helped out his former employer by shipping Kurt Thomas to the Spurs. Thomas will provide the Spurs with everything Robert Horry used to in terms of defense and a solid threat offensively.

The Hornets are fighting all naysayers who do not believe they can continue to hold up against teams in the Western Conference and if Bonzi Wells plays up to potential, their last trade could turn out to be a steal.