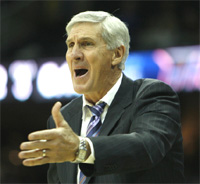 Having talked about the playoffs, the surprises and disappointments for the season for five months, it’s now about time when everyone starts talking awards. Who is deserving? Who is the best?

The MVP gets the most attention, and already there is a burgeoning debate among Kobe, LeBron and Kevin Garnett with a little Chris Paul thrown in. Kobe and LeBron square off for the best player attention and Garnett, the first half leader, gets the credit for resurrecting the Celtics. Paul is for the -how-are-they-doing-that Hornets.

Though there’s plenty of debate, the voters usually get MVP right.

The one they get wrong almost all the time is coach of the year.

This season it should be the Jazz’ Jerry Sloan.

What, you say, how could it be Sloan when his team last season won 51 games, its division and was in the conference finals?

Because he is the best coach who has done the best job this season. Which is what the award should be.

What the award comes down to, in part, because it is so difficult for so many of the voters to figure out just what the coach is doing, is, essentially, what predictions the voters got wrong.

The voters, mostly print and broadcast media, generally rate teams based on what they’ve seen before and what they expect for this season based on that. So if a team generally does better than expected, well, it must be coaching.

That’s how Sam Mitchell won last year, which was ludicrous. Same with Doc Rivers back in 2000 in his rookie coaching season, though Rivers has come a long way since then and is a legitimate coach of the year candidate this season. Also, Hubie Brown with Memphis in 2004. Those teams merely were underestimated by voters who hadn’t seen them before and didn’t take into account the personnel changes they’d made. Yes, all those coaches contributed and did good jobs those seasons, but I doubt any were the best coach at the time.

There’s a lifetime achievement element in my pick of Sloan as he never has won the award despite more than 1,000 coaching wins and just one losing season in the last 19, 20, actually, as the Jazz is just a few wins from Sloan’s 19th winning season in the last 20. C’mon gentleman and ladies, what are you watching!

Sloan, of course, would recoil at receiving an award for longevity. He’s upset enough when he receives any award he deserves.

But you have to consider what is great coaching since there is little secret to the pick and roll, except to the USA team a few years ago against Greece in the World Championships. Ah, but I digress.

Obviously coaches have to communicate, and Sloan has his unique form that is, shall we say, direct. Whatever, it’s worked as his players never fail to play hard and compete. He’s what everyone would call the tough guy, not exactly the so called players’ coach. Yet, his practices are relatively brief and he delegates more responsibility to assistants than perhaps any coach in the NBA. It’s not about credit and control for Sloan, but confidence. You’ll never see his name in the dictionary by ego, where many NBA coaches reside.

Though to many the ultimate test of a great coach is whether he can adjust and put players in position to succeed.

That’s mainly why Sloan, to me, is the coach of the year.

For more than a decade I watched Sloan’s Jazz with John Stockton and Karl Malone methodically wipe out teams with a series of crushing pick and rolls, relentlessly and continually, going again and again until the team got something. Opponents moaned about Stockton, perhaps the toughest six footer ever, calling him dirty. Big guys don’t like those interior screens put on them and Stockton never stopped, bumping, holding, pulling, grabbing, shouldering, whatever it took. And with that “Who, me?” look.

Malone? He was tough and mean. His blows were out there for everyone to see and they knew they were coming. More opposing power forwards got the flu in Salt Lake City than any other American city, Yes, Maloneitis.

And so they went and it’s now Carlos Boozer and Deron Williams, a terrific point guard and power forward.

Tough? Not that much. Mean? Not really. Defensive oriented? Not at all.

So here’s Sloan, who was the most in-you-face player when he played and had that type of team with Malone and Stockton.

And now his Jazz is an offensive juggernaut with a seven footer in Mehmet Okur firing up threes and needing a roadmap to find the lane. He’s got a smallish power forward in Boozer who is one of the poorest at his position in blocks and in defensive quickness. He’s got a terrific point guard in Williams who isn’t that enamored of defense, but will match anyone on offense. He plays one small forward who was run out of the East for a lack of defense in Kyle Korver and another in Matt Harpring who’d play it if he could, but his knees are like kindling.

The Jazz average more than 105 points per game, fifth in the NBA, offensive proficiency rarely heard of for the Jazz until the last few seasons with Malone and Stockton when league scoring was down. Their field goal defense is 21st. They’re 24th in rebounding, but second in assists.  They trail just the Warriors, Suns, Lakers and Nuggets in scoring average. You never want to get down in the trenches with any Jerry Sloan team. Yet, there’s no one in the West the Jazz can’t run with.

It’s really what the great coaches do.

Pat Riley was Showtime in L.A. and then Thugtime in New York. Whatever it took.

Phil Jackson believed in defense and equal opportunity from the Red Holzman days until Jackson came to the Bulls to find the game’s best scorer.

Gregg Popovich believed in throwing it down to his big guys and waiting for the double team and rotation for an open shot -wake me while I think about that offense- until he got road runner Tony Parker and manic Manu Ginobili. So it became Pop goes the Spurs.

There are several good candidates for coach of the year, and the Hornets’ Byron Scott probably is the early favorite with his team in the midst of the West race when many had them missing the playoffs. Yet, that was an injured and uncertain Hornets team on the move again last season. Rivers has been terrific with the Celtics in hanging in and pushing the defensive buttons. Stan Van Gundy has worked around several missing parts and one transcendent center to give the Magic purpose and Rick Adelman has weathered injury and uncertainty and changed with the desires of the talent to produce an unlikely contender after a slow start. All are deserving candidates and good coaches. And Jackson has remained steadfast and determined in believing in the Lakers and having his players respond.

Still, I’m on board for Sloan. Though don’t tell him because if he wins it will only make him mad.

But no coach has done better in adjusting to his talent, emphasizing its strengths and accepting its weaknesses and producing consistent effort and success. It’s simply what coaching is about and Sloan continues to do it as well as anyone.

Pssst. Pass it on.