My surprise pick for MVP

My surprise pick for MVP 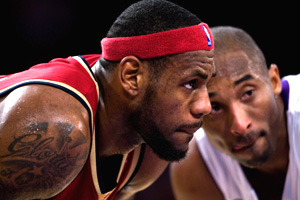 This year’s MVP winner will be the most scrutinized of any year we have seen.

Steve Nash coming from out of nowhere to win back-to-back was definitely an eye opener two years ago, but with so many teams and players having great seasons the lucky winner this year will be treated like an  elected official because he will not have over 51 percent in favor of his nomination.

This season is sick with great stories involving players and teams. Everyone has their own formula in deciding who the front runner with one month to go is. So I came up with my own formula to come to my pick as  MVP.

Once I came up with this formula I voted without looking at statistics the first time to see who would come out on top. The second time I looked at the stats and I still came up with the same player.

I am sure readers will beat up my method and abuse my choice if their favorite player did not get the nod, but I will tell you just like the NCAA told Arizona State when they got omitted from the 64 team field… This is  my formula and you have to live with my pick – well at least in this article.

I think we all can agree that five players stick out brightly when it comes to the finalists. Kobe Bryant, LeBron James, Chris Paul, Kevin Garnett and Tracy McGrady are the strongest candidates.

McGrady beat out Amare Stoudemire, Baron Davis, Tim Duncan and Deron Williams for the fifth player just based on what the Rockets have done in regards to this 22-game winning streak.

I took 11 categories and graded each player with a rating of 1 to 10 and then added the total. Then I saw who the winner was.

That seems so simple, right?

Well, without these so-called calculations… If someone asked me who I thought was the best NBA player on the planet? Without hesitation I would declare Kobe Bryant and then follow it up with a statement like,  “LeBron James will past him very soon like a locomotive once his defense continues to improve.”

I would also mention that Amare Stoudemire might give both of them a run for their money if he continues the torrid pace he is on.

That would be my basic armchair fan response, but I should get credit for researching further and not voting with my heart.

So I did and here it is.

Although not proven by numbers, categories like crunch time, showmanship and wow factor are a major part of the greatness of a player.

Example… Even though LeBron has scored more points than anyone in the league in the fourth quarter, which player would you feel comfortable with taking the last shot?

I would say Kobe without a doubt.

What player makes you say “Wow” on a consistent basis?

Well, I guess it depends if you like the high-flying acts of Kobe, LeBron and McGrady. Or maybe you enjoy the dribbling exploits and crossovers of Chris Paul in the land of the giants?

Which player gives you the impression that his attitude an effort is like Groundhog Day in that every time you watch him you notice it.

These are the things I think about when I pick my MVP and now you have the chance to dispute my choice or agree wholeheartedly that Chris Paul should win the MVP if the season ended today.

Paul (100 points) narrowly beat out Kobe (99) and Lebron (97) in my voting. And as I stated earlier, I voted twice without looking at stats and then taking them into consideration. He edged Kobe in the winning record  category for the simple fact the Hornets have blown out the defending champion Spurs twice this season. That was the difference.

LeBron has to improve his individual defense if he wants to jump over Kobe and Paul in the next few years. He also suffered with the subpar record the Cavaliers have at the moment. Yes, they have had injuries. But  didn’t McGrady lose Yao Ming and they still have kept winning with virtually no other stars in the more difficult Western Conference.

Bottom line… Chris Paul is such a joy to watch and observe. I really love the way Paul leads his team. He is constantly communicating with teammates and coaches and will confront them without hesitation. I have  not seen a little man do that since Isiah Thomas led the Pistons to back-to-back championships. The reason Paul can command this audience is because those players realize he not only leads by example, but he  makes them better. I can recall only a handful of players that had this ability. They are Magic Johnson, Michael Jordan, Larry Bird and Steve Nash.

They all have one thing in common. They have MVP awards. Chris Paul should receive his this season.