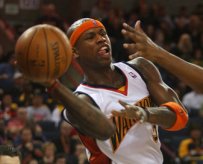 Harrington chose Tellem in the summer of 2006 after dumping Andy Miller.