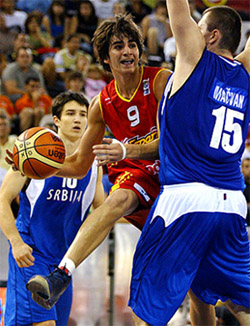 Looks like 17-year-old Ricky Rubio will have to make a Harry Houdini performance in order to escape from his water-filled tank. I mean, an Euro-filled tank.

“He has a 6 million euro (approximately $9.5 million) buyout”, one reliable source close to the talented kid told HoopsHype.com. “His agent is re-negotiating his current contract – and the talks stalled three months ago.”

News of the 6 million wall were first published on Marca.com by basketball journalist Quique Peinado.

And HoopsHype.com learned that his buyout is sixty times his salary for this year. So it looks like a lottery spot in 2009 – his first year of draft availability – is not going to happen until his club, Joventut Badalona, goes slightly mad and lowers the buyout cost – a lot.

Well, he could manage the issue like Juan Carlos Navarro did: it is said that the Grizzlies three-point shooting ace still owes his former club, FC Barcelona, more than $4 million.

Another source assures his current contract – signed with his parents when he was 15 – expires when he’s 20. Rubio was born on October 21, 1990, so under these conditions he would be an unrestricted free agent by June 2011. He could play his first NBA regular-season game when he turns 21. But hey, if his agents and the club can get things done…

But first, let’s call the Ghostbusters to bring Houdini. Now.

“Do you think the club is going to say, ‘OK, let’s put a 2 million euro buyout?’ Even if they said so, that’s more than $3 million”, the source answered.

He could go to the draft, but he would likely be a late first-round pick, losing many euros in years to come.

So what did the U.S. agents, eager to represent that kid, say when they knew about this?

“You can imagine. Everyone went mad. Big time”, said the first source.

More than a year ago, Las Vegas was ready to host one of its all-time best parties: the NBA All Star Game. I couldn’t believe what I heard at the 51st floor of the Rio Hotel one hour after I left my baggage.

While I was enjoying the glittering neon ocean of the city at the Voodoo Lounge VIP party hosted by then-Sun Shawn Marion, thinking who would be the MVP at the Thomas&Mack Center, it just happened. Bye NBA gossip; welcome back to Spain, Raul.

I was introduced to Nima Zarrabi, senior writer of SLAM, and his first words were “Hey! You’re from Spain? Do you know stories about this Ricky Rubio?”

“A couple”, I chuckled. By then I was his best buddy at the party.

This brought back memories of an old gym in a town near Barcelona called Blanes.

It was april 2004, and I was there when Ricard Rubio, then a 13-year-old kid, won his second official title. After that, everybody called him Ricky.

He played for the Catalonia team in a national high school tournament – sort of. It was the second game and I was switching from court to court looking for talent as three games were being played at the same time.

Then I saw Rubio, who had won a youth tournament organized by the ACB, the Spanish League. His team was in a full-court press and the opponent’s point guard couldn’t get past halfcourt. Rubio stole the ball. Fast break. Sweet layup. Nothing special, right? Wrong.

The other team’s coach asked for a timeout and the kid started to cry. Rubio was surprised when his coach talked to him. I asked ‘what is happening?’ A spectator answered: “That boy wearing No. 9 has stolen the ball to the other kid eight times in a row.”

Rubio’s coach was asking him to let it go and stop stealing the ball. He was innocently embarrasing his opponent, who was apparently like him, a skinny 13 year-old playing organized basketball. Right? Wrong again.

“Everybody is talking about Rudy Fernandez, but this kid is going to be like Rudy or even better,” an experienced journalist told me when Rubio was named MVP of the tournament.

Oops. Back to the Voodoo Lounge. After hearing the story and the other one about his 51-point, 24-rebound and 12-assist performance (including this miracle shot), Zarrabi took my arms and shook me so bad as he was yelling, “That’s it! We’ve got to go to Spain! You hear me, Raul? We’ve got to!”.

Finally he was featured on SLAM and hoop heads in the U.S. learned about him for the first time.

Four years later, Rubio was lifting the ACB King’s Cup held at Vitoria, and the chants were similar to that stealing frenzy back in 2004: “¡Ricky abuson! ¡Ricky abuson! [Ricky the abuser! Ricky the abuser!].” I was there too, amazed again with him and Rudy – who was the MVP of the tournament.

NBA agent Dan Fegan was at the stands and Rubio was one of the main reasons for his Spanish trip.

“He’s improving quickly”, said. “This year he has become a better shooter. He has a feel for the game and a body that has still to develop. He has something you can’t teach… You know, it’s like Pete Maravich. Something like that.”

Jonathan Givony, president of DraftExpress.com said about his progress: “His worst (or better yet: most improvable) skill right now would probably be his perimeter shooting. His shooting mechanics need to improve (he’s mostly a spot-up shooter right now) and his mid-range game also needs plenty of work. Since he’s not a freakish athlete, he won’t be able to get by guys as easily in the NBA, and therefore he needs to have his jump-shot consistent to open up his slashing game for him. Think of the way Steve Nash plays.”

“They protect him”, Williams said.

An assistant general manager of a Pacific Division team was in Spain a couple of weeks before the ACB King’s Cup and upon seeing Rubio he said, “He is the best basketball player I’ve seen outside the NBA.”

By the way, Williams lost in the quarter finals against Rubio’s Joventut, 84-59. And he had some venom to throw at the kid.

“He had a good game defensively, but he’s frequently committing carrying. He gets a lot of steals, but he’s doing what in the U.S. we call gambling”.

Is Rubio, with all the hype, an overrated player that will be extinguished if he dares to step on an NBA court?

“He can’t creat shots by himself, so he’s not a dominant player at all. I would say that his best skill is his anticipation. He’s been protected in Spain by the referees and the league itself.”

A staff member at Williams’ team, Pamesa Valencia, was surprised to hear of the criticism.

“Did Shammond say those things? He played poorly. Ricky, that kid, outplayed him clearly, so you can read between the lines.”

One of his agents, Josep Maria Marsa, disagrees with that.

“He studies when he’s not playing basketball. He usually goes to school early in the morning and then at noon he’s off to practice, and in the evening he returns to school. He studies while the rest of the team is playing cards or with the PlayStation.”

And what about communicating with U.S. players?

“He understands and speaks English very well, although he struggles a little bit at school because of the grammar and stuff like that. And while his friends have one exam each week, he has four or five in a row.”

He has to push them a few days because of his special activity: playing pro basketball since October 2005, when he made his ACB debut. He was 14.

He had 3.7 steals per game at the King’s Cup, although I noticed a stat that Pacers head coach Jim O’Brien loves: deflections. I could count four of them in the quarter finals, another four in the semis and three in the final game. His wignspan helps, but even more his vision on the court. Very uncommon for a teenager. And he has his dribbling behind the back down pat.

“He is the fastest guy doing that move in Europe”, said Joan ‘Chichi’ Creus, assistant coach of the Spanish National Team.

With the quiet season of Sergio Rodriguez at Portland, Rubio will have a chance to earn a spot in the national squad that will compete in the Olympic Games this summer.

Antoni Daimiel, one of the most popular basketball journalists in Spain, spent some time with Rubio: “Ricky steals the ball game after game like when he was 13. When he spoke with Elmer Bennett, he looked like a 13-year-old league veteran. When he’s with his friends from school, he acts like he is 17-years-old. When he’s with adults, he talks like them. I guess he listens to Sean Kingston, Mika, R. Kelly, Melendi or Fito y los Fitipaldis depending on who’s with. I never met an adult so childish and a child so mature. Always being the appropriate person.”

Rubio has drawn attention in Russia too.

“He is helped a lot by the great balance, coordination and quickness he has. It gives him a great advantage,” CSKA Moscow head coach Ettore Messina blogged.

And he’s always willing to improve. A crucial moment occurred last summer. He was invited to the Summer League in Las Vegas in July.

There in two weeks he discovered through lengthy, intense and bloody workout sessions with Joe Abunassar that becoming a great player requires much more than having talent and practicing a lot. You have to study the game, study your body and practice always.

There, he understood that his shot needed some improvement. And it has paid off.

The NBA will wait but… How long?