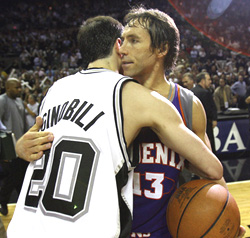 The NBA has probably enjoyed its finest season since Magic, Bird and a young Air Jordan were dominating the league and bringing new fans by the day. I have to admit that we are starting to see players littered around the league that finally get it. What is it? Well, it is the ability to play the game at a fundamental level the game deserves. We are seeing players that actually care about their field goal percentage, teammates, winning and respecting opponents with honest and kind comments.

This is what has been missing. This is what the old school players have been criticizing. Finally we have a product again that allows you to sit down and watch a game and appreciate the way the players compete and respect the game.

Just take a look at the MVP candidates. How can you choose between Chris Paul, Kobe Bryant, Kevin Garnett and LeBron James? All of those guys play the right way. All of them make their teammates better and they compete with effort and passion every night.

If you have not gotten my drift, just look at how competitive the Western Conference has been all year and although the East was not up to par prove to me that Philadelphia, Atlanta, Washington and Toronto are not worth watching and rooting for against the higher seeds.

This was the best season I have witnessed in a long time and I can’t wait for the postseason to get started. One warning: There will be no sweeps in the first round and we will have three lower seeds win.

Here are my picks for Round 1.

The Celtics have been the best team all year in regards to consistency. I have always said individual defensive accolades are overrated. Paul Pierce and Ray Allen just proved my theory, because they have become defensive stalwarts in the tight team defense of the Celtics. It will be hard for the Hawks to win this series just based on the rapid fire offense of the Big Three. Plus Kevin Garnett is on a mission. But Celtics beware if you think this is a cakewalk.

The Hawks match up with you quite nicely with the likes of Joe Johnson, Al Horford and Josh Smith. I did not even mention one of the best clutch playoff performers in Mike Bibby. The Hawks have the firepower to win two games in this series and they will.

The Pistons have been built for the playoffs for a long time and they always seem to use it to their advantage – except for last year against Cleveland. The key is Rasheed Wallace. The question is, will he or won’t he show up early in this series? If he does, the Sixers have no chance. But if he resorts to shooting 10 three-point shots a game… Well, this first-round series will venture to six games.

The Sixers are the most exciting team on the East Coast. They do it with speed and unselfishness and all the credit is pointed towards Andre Miller and head coach Maurice Cheeks. The play of youngsters Louis Williams and Thaddeus Young will be crucial for the Sixers in this series.

The Magic were one of the most exciting teams before the All-Star break and then became very boring right after. Howard can dominate and should in this series. Hedo Turkoglu has become the go-to star and has not disappointed.

The Raptors have not lived up to expectations and injuries played a part. Chris Bosh better bring it big time if the Raptors want to upset the third seed. Key player in series is TJ Ford. He is virtually unstoppable when on a roll.

This will be the most exciting series in the East. The Cavaliers defense better be air-tight, because if not they are in serious trouble. Also, LeBron will need some offensive help from at least two other Cavaliers – namely Zydrunas Ilgauskas and Daniel Gibson.

The Wizards, if healthy, might be the most dangerous offensive team in the league. If you don’t believe me, then go ask Boston. Caron Butler, Antawn Jamison and Gilbert Arenas are a load and they will exploit Cleveland in this series and finally beat LeBron.

On paper, this series looks like it could be very competitive. But here is the problem: Denver doesn’t play good team defense. That is a serious problem when you face those 200 years of coaching experience on that Laker bench. The trio of Kobe Bryant, Pau Gasol and Lamar Odom will score in bunches and then allow role players like Derek Fisher to flourish with wide open shots.

The Nuggets have a chance in this series if they keep defensive focus for 24 seconds and Allen Iverson and Carmelo Anthony realize that they will not beat the Lakers by themselves. The Nuggets have some serious fire power in JR Smith, Marcus Camby and Kenyon Martin if allowed to play. They can’t just stand and watch. I say the Nuggets will scare the Lakers and win two at home.

The Hornets are America’s team. They play great team basketball and have supreme confidence. Chris Paul is downright sick. He is the single reason why this team is even on the map right now. I love David West, Peja Stojakovic and Tyson Chandler, but the credit all falls in the lap of Paul and head coach Byron Scott. The Hornets have one negative and it will cost them… That is experience. Players that have never been to the playoffs think the experience talk is overrated, but the young Hornets will find out fast that it is not.

The Mavericks are still trying to find themselves since the Jason Kidd trade. They couldn’t have picked a better opponent to face. The experience of Dirk Nowitzki, Jason Kidd and Josh Howard will be too much. They will still need some stellar defense and rebounding from Erick Dampier, but I think they will find a way to upset the Hornets and move on to the second round. I personally will be rooting for the Hornets to prove me wrong.

Here we go again! The Spurs are still the champion and the Suns understand that champions never beat themselves. The Spurs have fought hard through another long season and are now trying to conjure up some energy to make another I-told-you-so run to the championship. The problem the Spurs face is that historically they have never won back-to-back. Tim Duncan, Tony Parker and Manu Ginobili will give the Suns fits as usual, but would that be enough to get it done?

The Suns are hungry, mad and determined to finally climb the Spur Mountain. They will get it done if Amare Stoudemire and Shaq stay out of foul trouble early and attack Duncan consistently to wear him down. Leandro Barbosa and Boris Diaw will have to score close to double figures off the bench thus negating Ginobili’s production. Steve Nash will have a great series and I think he will be the difference in the Suns finally eliminating the Spurs.

Simple fact the Jazz don’t lose at home, so the Rockets better take care of home business against a terrible road team with a great overall record. The Rockets have bulletin-board material because they saw the Jazz virtually give up home court advantage to play them and avoid the Spurs and Suns. Tracy McGrady has to be lights out the entire series and the Rockets must dominate the offensive glass for second opportunities. Luis Scola will be the key to the series defending Carlos Boozer.

The Jazz should have mailed in their final game with the Spurs. They wanted the Rockets and they got them. Deron Williams and Carlos Boozer are the keys and do it extremely well every night. The Jazz will steal one game in Houston and win all three at home.