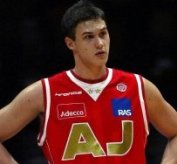 Italian forward Danilo Gallinari is entering the NBA Draft. The 6-foot-9 Gallinari sent a letter to the NBA to declare himself eligible today, his father Vittorio (a former player himself) told HoopsHype. Considered a potential lottery pick next June, he’s averaging 17.5 ppg and 5.6 rpg for Armani Jeans Milano in the Italian League.