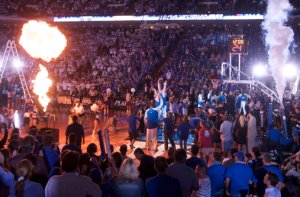 So where was that great NBA playoffs we all were talking about and expecting?

As everyone packed up and headed for new destinations after everyone finished two games Wednesday night, there were seven series at 2-0 and an eighth, the Pistons and 76ers at 1-1, and you know the 76ers have no chance unless ‘Sheed spends the weekend at Pat’s eating cheesesteaks and asking for extra cheese. Anyone who’s been to Pat’s-and if you’ve been to Philly you have been to Pat’s-knows if you want extra cheese they yell at you, and you know how sensitive ‘Sheed can be.

The first round is supposed to be like this. The best playoff teams play the worst playoff teams, and the best are supposed to win. Oh, sure, sometimes George Karl gets so nervous he can’t go to the bathroom and his teams end up stinking. And, of course, Tracy McGrady gets to go home quickly since his travel agent says he gets the best fares in early May.

Poor McGrady. We keep picking on him. Yes, Yao and Rafer Alston are out, so the Jazz is better and should win. Though you hate to hear McGrady saying he was gassed at the end of Game 2 (zero for seven shooting in the fourth quarters of Games 1 and 2) and had nothing left.

He probably was tired. The Jazz did what all smart teams do in the playoffs. You take the ball out of the hands of the No. 1 option or ballhandler (if you can, Dallas) by pressuring and doubling him. But if you are the star, even if you are tired, and especially if you are McGrady, who is a nice young man who has a reputation around the NBA as somewhat less forceful than General Patton, then perhaps you don’t readily admit how exhausted you were after your team lost again and you appeared headed out of the playoffs in the first round for the seventh consecutive time. Yes, you usually were the underdog, but at least fake it. You know, like a presidential candidate.

Here’s the issue with McGrady. He has star talent, but he doesn’t want to be a star, or, at least, the star. He is more comfortable being the No. 2 guy, deferring to someone like Yao. As we like to say in the NBA now, he is who he is and it is what it is.

And, by the way, while I’m rambling, Spurs coach Gregg Popovich gets my coveted Coach of the First Two Playoff Games award. Popovich was terrific in setting his team up to attack every Suns weakness, exploiting Steve Nash on defense, which really is no great innovation. But also mixing up his screens at different angles, doing just enough subtle things to win a possession or two, enough in Game 1 to draw up that brilliant Tim Duncan three. Who’d have thought of that. Hopefully, not Popovich.

I admit, intentionally fouling Shaq helped in Game 1 when the Suns took Shaq out, then had to double Duncan and Michael Finley got open for some  big threes. But I hate seeing someone as good as Popovich resort to that. Nellie, OK. He likes to mess with the game. Though Phil Jackson pretty much invented the hack-a-Shaq with his three headed center monster (well, maybe not quite monster) of Luc Longley, Bill Wennington and John Salley. OK, Dennis Rodman was in there somewhere.

But that’s not manning up. Play defense! Fouling like that is not part of the game. Yes, yes, just make the free throws and they’ll stop. It’s just not basketball, though. The game should transcend any tactic within any particular game.

That Kobe guy. He’s not Michael, but he sure is close. Closer than anyone’s ever been. That 49-pointer was terrific Wednesday night (did the net even rustle on most of those shots), though the Nuggets certainly win the award for the playoffs’ most undisciplined team.

If only Karl hadn’t retired before the playoffs.

You can tell Karl has given up. Karl is a fiery guy, a good coach and one who appreciates ball movement and fundamental play even if he never cared much for defense. He once wrote a book titled, “This Game’s the Best. So why don’t they quit screwing with it?”

It sounds like it’s the story of his Nuggets.

No one passes to anyone. The shots are crazy, almost like an old Seinfeld show of trying to do the opposite every time. Karl sits there with a perplexed look on his face. They seem to have overdosed him on drugs to just get him through the games with these players. And, yes, this will be Carmelo Anthony‘s fifth straight first round exit as he makes a run at Tracy McGrady and is now a Pau-like 3-18 in playoff games in his career.

Bryant’s the best player in the playoffs. The best player in these playoffs has been Chris Paul. Sorry, Dwight Howard is playing against Rasho Nesterovic. Well, at least some of the time. Paul’s play against the Mavericks has been the individual story of the first week, though it also has Deron Williams now officially replacing David West as the most underrated player. West gets mentioned as underrated so often now I think he may be overrated.

Williams, who generally outplays Paul every time they go head to head, or head fake to head fake, is quietly carrying the Jazz through the Rockets. Paul’s play has been special, especially doing it against Jason Kidd. One general manager told me he believes Paul is now a top five overall player and first team all-NBA.  I responded, Duh.

So we get to see what the kids now do on the road, the Hornets in Dallas where they’ve lost just about every game since Truck Robinson‘s last charge. The same with the Orlando Magic, who have been good on the road this season. Yes, Howard has been fabulous with his perfect vision games—yes, 20/20’s. But the difference has been Jameer Nelson, averaging more than 20 points. If that keeps up, the Raptors are extinct. Sorry, you deserve better clichés than that.

The Cavs have not been a particularly good on the road, or particularly good anywhere other than LeBron James. Washington’s problem is Gilbert Arenas. He’s back with plenty of excuses: Coming off surgery, wrist sprain, his mouse is stuck and his blog is slow. You have to take a look at Arenas. But he takes away from the defensive edge and team play that has Washington surprising all season. I thought the Wizards could win the series. But you begin to wonder the overall effect Arenas’ act is having on his teammates.

I also am not counting out the Suns yet. I expect Mike D’Antoni to come out for his pregame media session before Game 3 in a coffin and sit up and say, “We ain’t dead yet.”

The Suns have been a resilient team through major playoff disappointments and the NBA taking the Spurs series away from them last season. They should have won Game 1 and got on CBA rules would have won two points for quarters in Game 2. Yes, Tony Parker overran Steve Nash. But Shaq has been good and the Suns won’t give up.

And, of yeah, the Celtics still look like the best team.

But we’ve had just two games. Is that all?