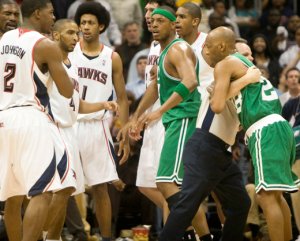 I must admit that I am extremely disappointed that we are not seeing more competitive series so far. I thought this could be a playoff season where we would have at least three or four series go seven games deep. I never thought it might involve the Atlanta Hawks and the Philadelphia 76ers.

The Eastern Conference, much maligned during the year, is giving us the most thrills while the West has been quite boring and uneventful.

But it’s not over yet!

The Suns were unable to accomplish something no team has ever been able to do and that is win a series after being down 0-3. This series will become an example for every coach to preach to its team about the importance of playing 48 minutes to secure victory. The Suns have every right to believe this series should at least been longer, just based on the blown opportunities in games 1 and 5.

Tony Parker and Boris Diaw grew up together and are best friends and played key roles. Ironically it took Boris to cool Parker down in the Suns’ Game 4 win, in which Parker refused to say Boris had any effect on him. Parker proved it with a huge plays down the stretch in Game 5 and was the best player in the series.

The sad line in this series is the fact Grant Hill could not play at full strength. Hill worked all year to get back to the playoffs after signing as a free agent. Life is never fair and if any player deserves good health and a chance at an NBA title, that’s Grant Hill.

The Nuggets are in a sad state. How can so much talent be so bad together? George Karl is a very good coach, but he changed his combative attitude at the wrong time and his players proved inept at leadership.

The me-first attitude of the Nuggets would not allow them to be competitive against the unselfish Lakers and they were swept and embarrassed. Carmelo Anthony claimed the Nuggets quit after Game 3, but what he fails to realize is that he and Allen Iverson quit on their team every time they hold the ball for eight seconds of the shot clock and hoist up tough shots when a teammate stands wide open.

The Nuggets are too talented to be a two-man show and there the problem lies.

The Lakers are in a serious groove and if Kobe continues to play at this insane level, it will be difficult for anyone to beat them.

The Rockets are fighting as hard as any team can, but it will not be enough without Yao Ming. Tracy McGrady has played extremely well despite a bad leg and constant double and triple teams. Deron Williams has been the best player in the series and continues to get better.

The Rockets big win in Game 5 has given them hope, but the Jazz are stellar at home and a Rocket victory will be tough.

Rick Adelman and Jerry Sloan should be applauded for developing role players and having the confidence to play them. We are seeing players like Paul Millsap and Ronnie Brewer for the Jazz and Carl Landry and Chuck Hayes for the Rockets be big contributors in this series.

OK, I was wrong by saying the Hornets would suffer because of experience. They have looked like the more confident team. The Mavericks have proved again that pressure is not their friend. The last three years have been a test of pressure and they have continued to fail. The Hornets close-out of the Mavericks in five games looked extremely easy. Dirk Nowitzki wanted the Hornets. I guess you should watch what you wish for.

What is up with Josh Howard? I once thought the stupidest statement I would ever hear was Latrell Sprewell saying he did not like the Minnesota Timberwolves offer of $21 million because he had to feed his family. Josh Howard just bypassed Sprewell with his statement of marijuana use in the offseason and stating the fact that everyone knows NBA players use it.

I am wondering how Howard could be thinking of coming clean about his drug use and also throwing the NBA under the bus while being down 0-2 in a series.  That 26 percent shooting shooting by Howard in the series will not help his cause either.

The Celtics have just entered the twilight zone. Winning 66 games during the season guarantees you nothing. The Celtics look tired and confused and better solve Joe Johnson and Josh Smith soon or they will become this year’s Dallas Mavericks.

The Hawks are a better defensive team than the Celtics realized and now they are searching for answers back in Boston.

Mike Woodson has done a great job all year with the Hawks and now it’s paying dividends. Maybe now management will back off and realize Woodson is one of the best young coaches in the league. Word has it that Woodson wanted the Hawks to draft Chris Paul or Deron Williams instead of Marvin Williams. I hate to imagine how good they would be if management listened to that plea.

The Celtics are playing with fool’s gold if they think all they have to do is show up. They have done it with defense all year and now they are trying to outscore the Hawks.

I feel so sorry for Flip Saunders. He has the best and worst situation of any coach in the league. On one hand, he has a talented veteran team that understands the game and knows how to win. Then on the other hand, he has a group of guys that think they know everything and are beyond instruction.

That’s the view I get when I watch the Pistons play. They play with no emotion and as George Karl would say, “They play with a coolness that disrespects the game of basketball.” They have not taken the 76ers seriously and now they find themselves in a long series against a team they should have dispatched easily.

The 76ers, on the other hand, are exciting and loaded with exceptional athletes. Andre Miller is having his best year of his career and has been the best guard in the series so far.

When Dwight Howard is playing at this level, he immediately becomes the best big man in the NBA. The Raptors had no answer for him and that makes the Magic a serious threat to reach the Finals. The Magic’s size advantage with Hedo Turkoglu and Rashard Lewis at the forwards was too much for the Raptors.

The Raptors did not live up to expectations, but they have a solid future ahead of them and Sam Mitchell should be safe for a few more years.

This series has been hampered by all the smack talk between LeBron James and the whole Wizards team.

The Wizards have failed to realize you must play instead of yapping. The latest is Brendan Haywood saying LeBron should stop whinning and expect to get hit. I agree with Haywood in that LeBron should just play and not worry about the physical play, but if I was still playing I would be glad LeBron is whining because that would mean he wouldn’t have extra time to whoop my butt even more than he already is.

Message to the Wizards: Let that man alone. The angrier he gets, the better he gets. LeBron is the best specimen the game has seen since Karl Malone and he will hurt you before you hurt him. Just play and see if you can win a road game.