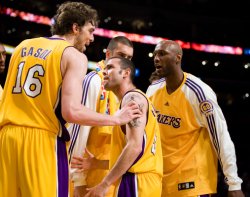 The 2008 playoffs are about halfway finished, and if there’s one thing we’ve learned it’s that the champion is going to come from the Western Conference yet again.

Have you been watching this Celtics-Cavaliers series?

No, I don’t blame you. I have been watching, though I enjoy finger nails scraping across a chalkboard and Republican presidential debates.

This most highlights the reason why the Eastern Conference is inferior to the Western Conference. The East has turned Ray Allen‘s sweet jump shot into Muhammad Ali against Trevor Berbick. Yes, Cavs coach Mike Brown makes a mockery of the game with his slowdown, half court, walk-it-up, unimaginative offense that generally puts LeBron James, arguably the best open court player in NBA history, in a one/four set against a wall of defenders.

It would be truly amazing if James remains in Cleveland when his contract expires with that system, which could have him used up by the time he’s 28. The amazing part is Boston has allowed itself to be lured into Cleveland’s stuck-in-mud game, which probably is smart in the short term for the Cavs.

They should lose Game 7. But too many of the Celtics flaws – flaws we all talked about before the season that seemed resolved in a brilliant 66-win run – seem all too real.

Could three All-Stars in their 30’s who’ve never had much playoff success and have just come together stand up to the crucible? It seems no now. Kevin Garnett‘s critics say he ran away from late offensive responsibility, and it’s seemed to be happening again. The ball doesn’t go to him enough, which is a Boston mistake, and he seems too willing to give it up, a Garnett failing. Could too much have been strained out of them pushing for that brilliant regular season? But it did give them Game 7’s at home in a season of parity when home court really matters.

The Celtics were wonderful to watch all season, scoring in transition, which Cleveland is good at stalling, moving the ball and themselves. But Cleveland invited them into bad basketball hell and the Celtics obliged.

Though Rajon Rondo bailed out Boston in Game 5 with a couple of big time first half threes, Rondo is mostly ineffective in the half court since he’s a poor decision maker and shooter. Sam Cassell doesn’t fit because he needs the ball and can’t defend. The Celtics Friday finally went back to Eddie House, who’d helped them all season but fell out of favor in the failed Cassell experiment. Kendrick Perkins has been useless and with Rondo that’s two players who don’t have to be guarded, allowing teams to pack it in even more. He should have yielded some time to Leon Powe. But the Little Nine doesn’t matter as much as the Big Three. Larry Bird never blamed Greg Kite. OK, but he was kidding. The Celtics impressed all season with unselfish play, but have failed to impose their collective will against two teams, the Hawks and Cavs, who have far inferior talent.

Whoever comes out of the West it’s difficult to see threatened by an Eastern team.

So what else have we learned in the last month?

Though Williams’ Jazz went home Friday night, we’re now waiting to see Williams and Paul in the USA team backcourt this summer. The duo now look like 1-2 in NBA point guards with Williams now officially the league’s most overlooked player, especially with Paul the darling of these playoffs.

But Kobe Bryant would still be my playoff MVP. No one gets more defensive attention and makes more big shots.

Williams can’t have the freedom in Jerry Sloan‘s structured system that Paul has. Still, Williams averaged 21.6 points and 10 assists in the playoffs and 24 points and 12 assists the last five games against the Lakers.

The Jazz lost because Carlos Boozer couldn’t make shots, allowing the Lakers’ big men to stay inside, where Boozer was too small to play effectively inside.

The Lakers now look like the title favorites, and that’s without Andrew Bynum.

Lakers coach Phil Jackson hardly got any credit this season for pulling together what looked like a disaster of a Lakers season back in October as Bryant fought to be traded to the East, where he no doubt would have turned into Ricky Davis.

But with the Lakers now setting up what could be a five-year run, Jackson could pass Bill Russell in championships.

Figure them the favorite over who emerges from the Spurs-Hornets Game 7.

What we seem to be encountering there with three Hornets blowouts at home is less the power of home court advantage than two teams meeting, the Spurs on the way down and the young Hornets on the way up.

The future West landscape is beginning to look like the Lakers, Hornets, perhaps Trail Blazers and Jazz.

The Spurs hardly are done with Tony Parker at 26. But Manu Ginobili soon hits a hard 31 with all those falls and flops and international play and Tim Duncan is 32. Their supporting cast is mostly applying for Medicare. It’s why you see the young Hornets too quick for the Spurs too often. Look, this has been a serious decade long run. Few ever go that long. Few have been better than the Spurs.

Even if the Hornets don’t get by the Spurs Monday in Game 7, they are awfully close in their rear view mirror.

This quirky home court dominance in the conference semifinals has led to a mostly boring round with few game winners or buzzer beaters and plenty of blowouts. But with only the Pistons and Lakers winning on the road, at least we get a pair of Game 7’s, which don’t come along much.

So what else have we learned?

While much was made of Rodney Stuckey stepping in for the injured Chauncey Billups against the Magic and not making a turnover in two games (though Lindsey Hunter threw away his walker and mostly played that first game), it was Hamilton who came up huge with 30-plus games and averaging 43 minutes the last three games.

Yes, Tayshaun Prince‘s block on Hedo Turkoglu in the clinching game was the defensive play of the playoffs. Though Duncan’s three in the Game 1 with the Suns to send the game in double overtime – still the best game of this playoffs – remains the best moment in these playoffs.

The worst? The fire in New Orleans, as if they don’t have enough disasters, the choking pregame smoke in Boston, Carmelo Anthony declaring his team quitters (hey, was that another forced Anthony shot?), the Spurs hack-a-Shaq. As Mark Jackson would say, “Spurs, you’re better than that.” And the foolishness of the Washington Wizards, who seemed to have taken Gilbert Arenas‘ entertainment-instead-of-basketball lead by importing a failed rapper to try to mock LeBron James’ rapper friend.

It seemed they could have been using the stuff Josh Howard – wink, wink – says he saves for summer.

So we’re halfway there and if this is where amazing happens, then the games have to be getting better. Although I’m not holding out much hope in the East.