Booze, not pot, the real problem

Booze, not pot, the real problem 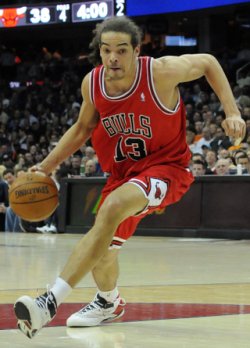 I was reading the report last weekend of Chicago Bulls center Joakim Noah being arrested back at the U. of Florida for marijuana possession. And I’m thinking, “Why is this news? Isn’t it news if it was reported Noah—have you ever looked at or listened to this guy?—wasn’t using marijuana?”

But here we go again with NBA reefer madness with Noah and a month or so ago the dumbest player in the NBA—that certainly would be Josh Howard now in what no longer appears a close contest—volunteered he’s a regular offseason marijuana user and figured it was no big deal because it’s use was commonplace in the NBA.

Geez, didn’t anyone ever give this guy that speech about if your friend jumped off a building or told the world he was committing a crime would you do it, too?

Anyway, this all hardly qualifies as an epidemic, though many would have you wringing your hands and again lamenting the social ills of the NBA. Yes, back in 2001, Charles Oakley decided that maybe 50 to 60 percent of the players in the NBA used marijuana. A few years later, the Rocky Mountain News surveyed NBA players and from a sample of about 60 decided that some 30 percent of the players were using the drug.

Both of these accounts followed a 1997 New York Times report of substance abuse among NBA players and threw out a figure of 60 to 70 percent, though lost in the fine print was no real distinction between alcohol and marijuana.

I know, I know, marijuana is illegal and alcohol is not.

But this should give pause to everyone who reads and reacts to headlines of NBA players using or being arrested in connection with marijuana.

I don’t know how many players in the NBA use marijuana, though we do know now about Noah. We’ve previously heard issues with Allen Iverson, Chris Webber, Robert Parish, Kareem Abdul-Jabbar, Rasheed Wallace and at one time most of Portland, though it is a particularly liberal place.

Of course, we’ve also heard the same about former President Bill Clinton, who insisted he didn’t inhale, and now U.S. Senator Barack Obama, who also wrote in his first book about experimenting with “blow,” the street name for cocaine.

Using Aristotelian logic, perhaps this means more NBA players than we think could be running for president, though in the Democratic party. Which might not be a bad thing because perhaps they’d be too mellow to be declaring war so often.

That is what your 20’s generally are for. There’s an old saying about socialism from Winston Churchill that says if a man is not a socialist by the time he is 20, he has no heart.

If he is not a conservative by the time he is 40, he has no brain. The point is your 20’s is for asking and answering questions and experimenting with life.

So marijuana should be legalized, right? It’s not legal, so that’s the answer for now. It’s also illegal to file taxes that do not perfectly represent your income and expenses and to go over the speed limit when driving. But I’m told it’s happened.

The larger question to me being around the NBA is the effect of alcohol.

The NBA has a drug testing policy, probably the toughest in sports and for the longest time since cocaine use was a major issue in the late 1970’s and the players wanted it cleaned up. All players are tested for drugs including marijuana up to four times per season.

Do some players in the NBA still get away with using marijuana? Sure. I’ve heard some names, though they don’t invite me along. What’s the percentage? Who the heck knows?

I believe it’s far less than any of the estimates thrown around. Though I do know alcohol abuse is rampant and I’ve witnessed that for many years.

Because there is drug testing, the stimulant of choice in the NBA now perhaps more than ever is alcohol. I’m told the fellas enjoy their vodka and Red Bull. And, of course, beer, which had been widely distributed in sports locker rooms for years before St. Louis Cardinals player Josh Hancock was killed in a car accident last year driving home from a game.

This is the trickiest issue of all for all of us because while alcohol is legal, it is frequently abused. Do you think more people are killed by drunk drivers or pot smoking drivers? How do you feel in the parking lot after your favorite major league baseball game knowing that guy sitting next to you with 12 cups stacked high is driving home? But with the games often sponsored by your favorite brew, what’s the choice?

I recall during the winning years of the Bulls franchise in the 1980’s and 1990’s seeing players like Michael Jordan and Scottie Pippen dropping several six packs in their gym bags after the game. Drinking on the way home? Who knows? Maybe they had drivers. I don’t know.

I recall being in the team hotel and seeing the waiter taking empty liquor bottles on the tray from the room of Vin Baker. It was widely known around the NBA at the time Baker was drinking heavily. But it was legal. Should I as a reporter have written about it? It’s not like Baker was doing anything wrong but throwing away his career as he’d later go into rehab.

The team knew about it and teammates did as well. So did Baker’s representatives. But the stigma of going into rehab could cost him a contract, so no one ever said anything.

I know of several players now around the NBA who tell me teammates have serious drinking issues. They say the team and their agents know. But no one wants to do anything for fear of losing, A. The player as an asset; B. The player having a chance to get a better deal or new contract when his current one expires.

What’s my responsibility to write about it? What if the player drives and kills someone or himself? Could I have warned someone by reporting it? But what right do I have if he’s doing nothing illegal? And the people closest to him and for whom he works aren’t doing anything?

It seems to me these are the bigger issues facing the NBA—and all sports—today. Yes, there’s marijuana use in the NBA, and to anyone who saw Noah with his white suit on draft day in 2007 you figured there was a marijuana arrest in his future. But the league has bigger substance abuse issues, which don’t seem to be addressed by anyone.