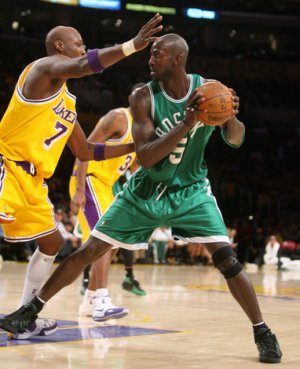 The Finals are here and the league could not be happier. The Celtics vs. Lakers series brings back so many memories of the best era of basketball. Bird against Magic, Kareem battling Parish, McHale fighting the athleticism of James Worthy, Michael Cooper showing what defense is all about, Dennis Johnson doing his Oscar Robertson imitation, Pat Riley wearing his Italian suits,  etc, etc…

Every year these teams met, they where the best teams in the regular season and this year is no different.

The Celtics and the Lakers are the best and now they face off against each other just like in the 80s.

The characters are different but if this Finals go as expected and these two teams stay fully equipped and injury free over the next few years, they could be facing each other a few more times in the future.

This series gives us two of the best one-on-one players in the league in Kobe Bryant and Paul Pierce, the two most versatile seven-foot players in Kevin Garnett and Pau Gasol and most importantly the two most storied franchises in all of sports.

Do I have a prediction? Yes. But first I will give six reasons why each team could win the series.

1. Kobe Bryant dominates the series with his scoring and defense. Boston’s defense is geared toward smothering star players and taking the ball out of their hands. But if Kobe is still scoring regardless, the Celtics are in serious trouble.

2. Lamar Odom and Pau Gasol keep Kendrick Perkins on the bench and forces Doc Rivers to play James Posey, which then allows Phil Jackson to isolate and post Odom when Garnett has to guard Gasol. Odom is the Lakers’ key player in this series and Jackson will focus on taking advantage of this matchup. PJ Brown will give a solid few minutes, but it still helps the Lakers with a very good rebounder like Perkins on the bench.

3. Pau Gasol matches the production of Garnett, which would be devastating for Boston. The Lakers are a great offensive team and Gasol equaling Garnett would give them a tremendous advantage. The Poodle will have to play like a Doberman against the hyper Garnett.

4. Kobe, Derek Fisher and Sasha Vujacic continue to keep Ray Allen inconsistent. The key is to take away one of the Big Three and Allen seems to be the most vulnerable coming into the series.

5. The Lakers bench, led by Luke Walton, Jordan Farmar and Sasha Vujacic, continue to dominate in the middle quarters when Kobe is resting. Phil Jackson is counting on this unit to win the plus-minus against Boston’s bench, which has been up and down.

6. They score over 100 a game. If that happens, the Celtics will go away quickly. The Lakers will try and force tempo and if that happens this series will be over in a hurry.

1. Kevin Garnett spends equal time in the post as he does on the perimeter and averages 20 or better for the series. We know his defense will be solid, but the Celtics need his interior scoring and if he gives it to them the Celtics will have success in this series.

2. Paul Pierce forces Phil Jackson to defend him with Kobe. Jackson will try every avenue to keep Kobe away from the physical Pierce. But if he is having his way with Vladimir Radmanovic and Luke Walton, Jackson will have no choice and that would spell trouble for the Lakers. Pierce draws fouls better than any small forward in the league.

3. Ray Allen, quite frankly, becomes Ray Allen. Allen showed some signs in the latter stages of the Pistons series and if he catches fire the Lakers are in deep trouble. The Lakers have one player that can virtually carry a team for a game. The Celtics have three and Allen is due.

4. Kendrick Perkins finds a way to stay on the floor and dominates the glass, especially on the offensive end. This would negate the Lakers getting easy transition baskets and most importantly slow down the pace of the game. The Lakers will give Perkins open shots and he has to be ready to knock them down.

5. Rajon Rondo continues to grow and be steady on the offensive end. He will definitely give Derek Fisher problems with his defensive pressure, but he must make the Lakers pay when they use Fisher to roam and provide help defense.

6. Doc Rivers finally relents and gives Eddie House some solid minutes. The Celtics need consistent scoring against the Lakers. House can change the flow of the game with his shooting. Rivers was afraid to use him against the defensive pressure of Lindsey Hunter and the Pistons, but neither Farmar nor Fisher should bother House in this series to the extent Hunter did.

I really like both teams and I am sure whichever way I go will fuel some irate comments, but that’s why I write the blog.

I disagree with the comment “Defense wins championships” because the Lakers won a bunch with Magic and they were known for offense. Plus it is a Catch 22 comment. Why? Because good balanced offense gives you a solid defense. It is all about floor balance and teammates knowing when a shot is going up and not being surprised and out of position to retreat defensively. Yes, defense wins. But offense sets the table, so both should be praised.

Boston comes into this series as a great defensive team and the Lakers are getting high praise for their smooth productive offense. Yet all these prognosticators that preach defense are going with the offensive team. Go figure!

I have always believed that veterans win in this league because when times get tough they dig out and produce when needed. Also veterans are hungrier because the window is closing and they see the end. Young players think it will happen again and again, which makes them close their ears to advice to the contrary.

My prediction is the Lakers will succumb to inexperience and struggle, thus forcing Kobe to try and take on too much responsibility. Radmanovic, Farmar, Gasol, Vujacic and Ronny Turiaf (all key players for the Lakers) will struggle against the pressure of the Finals and the Celtics’ defense.

The Celtics have three players that can carry the load of the inexperience of Perkins and Rondo. My key player for the series will be James Posey. He has experience with the Finals as a Miami Heat player, he is a great defender and he has been deadly with his three-point shooting in the playoffs.

The Celtics will win in six games and hang another banner in the Garden.