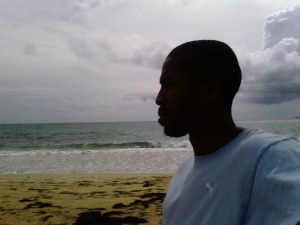 Did you know the atom, the little bitty things that make us up, are over 97 percent empty space? I heard that and couldn’t believe it so… I looked it up and read that as small as an atom is (millionths of a millimeter), its center (proton) is one-hundered thousand time smaller than the atom itself. Then the electron(s) that orbit(s) the center are a thousand times smaller than the center itself. The rest of the atom is just empty space. So wait a second… If I’m made up of atoms and the atom is pretty much non-existent… Am I really here? Crack anyone? These are the kinds of unbelievably unorthodox things I ponder in the offseason. I really don’t do much thinking about basketball at all. I start off with some off-the-wall thought or question like the aforementioned and it somehow comes full circle and changes something profoundly in my game and life that everyone else just does naturally. Beeeee-cuz I’m a hard head and I like to complicate 2+2. Five! (Stop it, Bird).

I always look forward to the summer. I get to add something beneficial to myself. Or even better, remove something unproductive. I’ll literally do anything and everything that you just don’t expect a large, basketball player of Bantu descent to do. And I promise, I don’t do these hippie things to be different. I just want to see if any of these “secrets” really work. Summer goal: Turn into a basketball leviathan. Plan of action: Yoga, diet, meditation, exercise. Notice how the plan of action did not include the sport itself? I’m trying to expand on something new that worked out well for me this year. I executed that plan of action but with flaws.

1. I wasn’t consistent with the yoga. So I plan to go to Austin, where I met a 50-year-old yoga guru who can do backflips. He’s got plans to put me in yoga sessions in a 102 degree room. That ought to be fun… (Insert fart noise with thumb pointed down here).

2. I started the diet thing about this time last year and if you all have followed this journey, you know I am far different now compared to when I started. Won’t beat a dead horse.

3. Meditation… Sorry, can’t make that sound cool. Just trying it because everything else in this way has worked well. The good thing is, if you’re a baller and you don’t wanna try some fad because it sounds like something new to do but doesn’t really work, I’ll be the ginny pig and I’ll let you know. Because if it’s some bovine boo boo, you know I’ll say it.

4. Exercise. I really don’t do much. The biggest thing I think got me physically stronger was Brazilian ju-jitzu. I didn’t really get good at it until I lost weight. I thought at 270 lbs, I’d smack around everyone I saw. Then I tasted a rather delectible headlock from a barely 6-foot, 175 lbs Boricua that put me to sleep. And when I woke up, I was surrounded by Snow White and her seven dwarfs. Then I woke up again. It wasn’t until I was slim that I could actually submit people.

Anyway, that’s the summer plan and I plan to chart and blog about the progress every month, so we can see together whether the mainstream has spewed the garbage we all suspect it has all these years or if the idea of bettering one’s mind, body and spirit through enlightenment is not just a hippie’s LSD fantasy dreamed up in the 70s.

Unfortunately, the only thing I’ve been able to do so far is the diet and keeping up with my yoga everyday. I did the Puerto Rico thing for a second and it was incredible. I think it was the first time I went there and really enjoyed the life it has to offer. I didn’t engulf myself in the blackjack table this time (as is my usual vacation in PR). I just played ball, ate fruits growing on the trees outside (seriously! I didn’t even know mangos grew in PR until this year and I’ve played there eight years), jogged, chilled on the beach and swam in paradise. Now there’s got to be something to this “Qi” thing. I was so relaxed, engergized, at peace, in balance… Man, I don’t know what the hell to call it. I simply felt incredible. I did something I never did in high school, college or pros (not even in China). I had a game I scored 22 points in the first quarter. Now look… Anywhere else and I wouldn’t even have mentioned it. But anyone who knows the PR league, knows that is the second best comp you will get outside the states. Just ask Carlos Arroyo.

Anyway, the point of that was, damn! How the hell could I never do those kinds of things when I was younger, faster, str… Well the answer is, maybe I wasn’t any of those things back then except younger. And dumber, yeah… Maybe dumber. Maybe. I guess all those times my Caucasian bros invited me to the lake in Austin (Mihm, Luke, Ogden… Actually Chris Ogden wanted to go hunting. He just wanted to pull the Dick Cheney on me. But I think he likes me now), I should have gone. God knows they were always less wound up than me. That wasn’t so hard seeing as how I was tighter than… Stop it. I lost track…

Now that I’m done dealing with things like my youngest bro getting jumped by a bunch of backwoods, inbred, cowardice, uneducated Jerry Springer rejects, I can concentrate on the civilized. If you could just step into the courtroom I just left in, ready? Mitchell, South Dakota, you would find it hard not to be as relieved as I am right now. Long story short, my lil’ bro got a crash course in why you shouldn’t feel comfortable in places you might not be welcomed. And even though the (four) guys are on trial now (for a misdemeanor) even though they (49 yrs, 30+, 25 yrs and 23 yrs) jumped a 20-year-old and beat him good enough to break his nose in 2008 in America, I’m not mad. Because when I saw them, they were so pathetic all I could do is laugh and get mad at my brother for not being sober enough to beat the flies off the crippled warthogs when they jumped on him. Lord, if you’re listening can we rewind time and have them jump me? Please? Cause I don’t drink. See how uncivilized and unproductive having to even address this nonsense is? So now I’m back at the house and, like I said, back to the civilized.

I get to watch Kobe now. Ha! Beat that. I just wish the Lakers could have tied the series. Funny thing is, this is my first time calling the champ in advance. And now, I kinda want them to lose. Sorry, sorry Boston… I know. I just wanted Kobe to get some redemption. And it gets even weirder… I don’t particularly consider myself a Kobe fan. I confuse myself, I swear. I love… Let me rewind. I absolutely enamor Kobe’s game. I think he is the absolute definition of “work equals production.” Have you ever seen a player that makes every move and every shot look like he practiced them each a million times until the very way the ball goes in repeats itself? When John Lucas said Kobe was better than Mike, I thought he was nuts. Whoa tonto… Not saying I think he’s better now but those who believe it. (Deep breathing G) The people who say Kobe and Mike are comparable in skill have an argument and I’ll leave my opinion here now. Fell free to flush at any moment.

Wait… What the hell am I talking about? I just gotta a flash in my head of the final shot MJ made against Utah for the sixth ring. I can’t ya’ll, sorry. I just can’t. He’s the greatest. That’s right, Ironman, Superman and MJ, in that order!! Vete pa’ carajo!

On the cool though, is the series boring to no end unless LA ties it up? Boston seems too big in the paint and too big in the pants to lose. My vote: Put Mbenga, Mihm, Bynum (I know he’s hurt), Odom and Gasol in… At the same time! Oh, that’ll show ’em! Rebound that, beeeeyaaatch! Please send your medical recommendations to hoopshype@hoopshype.com.

People stay with me here. I’m starting up my ju-jitzu again and staying steady on the yoga and diet and we’ll see what the end product is together. I’m still in the process of finding the balanced “Qi” if it even exists. So I am truly setting in motion the house on the beach thing in Africa so I can find that qi. Tired of talking about it and everyone else I know calling me from there telling me how energizing it is. I’m sending family back home to insure the business in Central Africa continues as planned. Oh by the way… Do not fly Air France. Ever. This is the fifth time I’ve dealt with them and they never disappoint to disappoint. If you play ball and travel like we oversea-ers do and you’ve flown Air France, you know like I know, the customers is always a thorn in the side that if given a chance will piss me off til I strike (again) and throw my gourmet knowledge of cheese and wine in their faces. I love France. I hate Air France. Take the chance if you want so you can see for yourself. But like pops said, (another West African proverb. ready?) commot d biro bros: Ukpana okpoko buru, nti chiri ya. Translation: I gotta get my b.b. gun and take out these damn mockingbirds keep eating my tomatoes and terrorizing kids.

I’ll get back to you on the progress and the translation unless someone beats me to it.