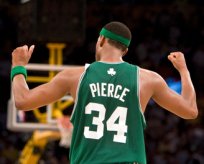 It was love at first sight, really. The perfect yin and yang, sun and moon coming together, different but making up the whole, complementary forces of basketball nature. Kevin Garnett was the defender but not the finisher. Paul Pierce and Ray Allen were the shooters but not defenders or truly team players. Garnett was the ultimate team player, perhaps too unselfish. Allen and Pierce were the shooters, eye on the basket and not their teammates.

It proved to be the perfect union, and the result was what was missing for all three as the Boston Celtics behind Garnett, Pierce, Allen and a host of effective supporting players defeated the Los Angeles Lakers Tuesday 131-92 to win the 2008 NBA championship.

It was the Celtics 17th alltime NBA championship, the franchise’s first since 1986 and denied Lakers coach Phil Jackson his record breaking 10th NBA title as a coach (he remains tied with Boston patriarch Red Auerbach) and Lakers’ star and league MVP Kobe Bryant his fourth and first without Shaquille O’Neal.

It was achieved, finally, in impressive and symbolic fashion as Allen, before going out for a time with an eye injury, opened up shooting the Lakers into difficulty, Pierce passing the ball impressively as the Lakers crowded around the (expected) series MVP and Garnett scoring early from the perimeter, as he’s always done, but also making the key defensive plays, if so subtle.

One play, mostly unnoticed, was typical.

As Bryant ran by the screen with his defender caught behind, Garnett stepped out briefly to deny the curl and pass and Bryant had to go to the top of the key to receive the ball and face up now against all five Celtics defenders. It was a subtle move by Garnett, but typical of the reason why the Celtics were the league’s best defensive team this season and smothered the Lakers throughout this series with their defense.

By halftime, after a 34-15 second quarter, this series was over and the Celtics were celebrating.

There’s been much talk in these Finals about a trip along the Boston parade route that the Celtics’ so called Big Three took early in the season with coach Doc Rivers and about their bonding in the preseason during their trip to Europe.

But that doesn’t explain how the Celtics won the championship after having the league’s best regular season record.

They did it with defense, obviously, but also commitment and tactics.

One instance in preseason stands out.

The Celtics were running suicides, those halfcourt sprints after practice, and not surprisingly Garnett was beating everyone.

It’s why Garnett, though not the offensive finisher to carry a team and a player who does not dominate from the post despite his size, was the key because if your best player practices the hardest, it’s difficult for anyone else to coast.

Still, Pierce has often been known to ease through seasons and particularly practices, not always the most motivated team player. He fought openly with Rivers when Rivers came in with demands Pierce expand his game and be more unselfish. Little progressed because the team was so bad and lacking in talent Pierce had license to continue to shoot and score.

Pierce was jogging through the drill in his L.A. cool mood and Garnett turned angrily and demanded, “Are you going to run with me!”

No one ever had challenged Pierce like that in Boston, and certainly no great player.

But Garnett needed Pierce as well. The book on Garnett, more whispered because he was such a great competitor, was you bang him and he’d float outside. He rarely went to the free throw line, just like in this series, and down the stretch, like in Game 5, he could miss them. Pressure? Exhaustion from effort? No one ever fully understood with Garnett as he did play so hard and was so intense he’d often be screaming at teammates as well.

But he couldn’t be counted on to finish and carry a team. It’s one big reason why his Minnesota Timberwolves failed so often and advanced past the first round just once, when Garnett had a younger Sam Cassell and Latrell Sprewell to pass off the baton after the third quarter.

Yes, Pierce time. Though generally not regarded a top 15 or perhaps even top 20 player because of his poor team showings, Pierce never shrunk from the spotlight and chance to win a game. He loved the last shots. He’d wave players off. Likewise, Allen would take the big shot, but he wasn’t much on creating of the dribble or creating space. So as the defense might eye Garnett or would eye Pierce, Allen was there with that quick release and shot.

Neither Pierce or Allen was ever known much as a defensive player, and with their teams it wasn’t like it was demanded much since they were required to score. Garnett could average 20 points as well, but it was defense first, team play first. But no one was going to mistake him for Tiger Woods or Michael Jordan making the big shot.

And so it was the ideal coupling. Not only because they came together but because they needed one another to have any chance at success. What each lacked, someone else was there to supply it. What each needed, the other was there to provide the inspiration and motivation.

Once again, the Celtics’ universe is in harmony.