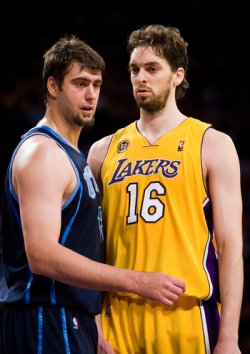 In his first five years on the job as the man in charge of basketball operations for the Boston Celtics, Danny Ainge made so many trips to Europe he could have arranged for dual citizenship in any number of countries.

This year, he didn’t go at all.

It’s not that the Celtics didn’t scout international players; Ainge is a big fan of the Knicks’ draftee, Danilo Gallinari, having seen him in the flesh many times as well as on tape. But in Ainge’s opinion, the just-concluded NBA draft wasn’t exactly overflowing with jaw-dropping international talent.

“I think it’s deep not with star-type players, but with a lot of role players,’’ he said. “And I think a lot of them will make the league.”

And a lot of them will probably stay exactly where they are.

It may be simplistic to suggest that the bloom is off the international rose, but a number of happenings, including the just-concluded NBA Finals, have managed to at least put a hold on the NBA’s fascination with all things international. Or, we should add, with the NBA teams’ fascination. David Stern can still tell you how many daily hits nba.com gets from the most remote stretches of Slovenia.

The NBA and basketball observers everywhere have been consumed by the international game for awhile, but things really got serious after Argentina took apart the United States at the 2002 World Championships. Since then, US teams of NBA stars have been beaten in major international competitions by Spain, Yugoslavia, Puerto Rico, Lithuania, Argentina (again) and Greece.

But with few exceptions (Manu Ginobili, Pau Gasol pre-2008 Finals) those teams did not possess NBA “star-type” players (to quote Ainge) and won mainly because of their teamwork. They were the epitome of the tired but true cliché: the whole is much greater than the sum of its parts. They knew each other and played like it. Lithuania did have an unquestioned European star in Sarunas Jasikevicius, but he bombed big-time when tried to make the jump across the pond.

Greece didn’t even have an NBA player on its team, unless you count Vassilis Spanoulis, who sat on the Houston bench for a year, was traded to San Antonio, and then went back to Europe. He may be one of the few players in NBA history to buy his way out of his contract. Usually, it’s the team that does that.

Gallinari was the sixth pick in the draft and the only international player in the top 19. (Somewhere, Dick Vitale and Lou Dobbs are smiling.) Among the other first-rounders taken, virtually all of them had a biographical attachment saying “expected to remain in Europe for more seasoning.”

If Gallinari becomes one of those “star-type” players, he will be the first international All-Star out of the NBA draft in six years. That was the year that Yao Ming went No. 1 overall and he has proven to be well worth the time, money and energy the Rockets expended to get him to the United States.

But a more revealing pick in 2002 came just four spots after Yao. With players like Caron Butler and Amare Stoudemire on the board, the Denver Nuggets selected Nikoloz Tskitishvili. He was reputed to be the next Gasol. Oh well.

Then came the classic goof made by the otherwise astute Joe Dumars, who took Darko Milicic in 2003 over the likes of Chris Bosh, Carmelo Anthony and Dwayne Wade. Yes, the Pistons won the NBA title that year without much from young Darko, but you get the feeling they might have won another (or two) had Dumars taken any of the other three fellows that fateful June night?

You also get the feeling the Orlando Magic might be further along had they not completely blown the 2005 draft by using a lottery pick on Fran Vazquez, who has yet to play a single NBA minute and quite possibly never will?

Out of all the Europeans drafted since 2003 – and almost 30 of them were first rounders from 2003-2007 – there have been only a few who have had any discernable impact in the league. And that includes the No. 1 overall pick in 2006, Italian Andrea Bargnani. The best thing the Raptors can say about him now is that with the addition of Jermaine O’Neal, Bargnani can go back to the bench. He may eventually become worthy of his draft selection, but, to date, he hasn’t. And the Bucks had one year to look at Yi Jianlian, the No. 6 pick in 2007, and traded him. Eventually, he, too, might become a star.

What do we make of all this? First, the NBA may have exhausted the immediate talent overseas and needs to wait for another cycle. Second, it’s no longer a stigma for some of these players to not  play in the NBA. Jasikevicius is happy where he is. Vazquez, presumably, is as well, along with Spanoulis, who was so homesick in Houston even with his mother living with him. Tiago Splitter is likely to remain in Spain where he can be paid more than what the Spurs can offer him. And in Euros.

But here’s another possibility, which we saw first-hand in the NBA Finals. Most of these international players don’t play defense. (Andrei Kirilenko being the notable exception). That doesn’t necessarily constitute news, or a dirty little secret, but it was painfully obvious to anyone who paid more than casual attention to the NBA Finals.

One of the enduring snapshots from that series was when Ray Allen, who had played the entire game, blew by a bewildered Sasha Vujacic for an uncontested layup in the final minute to seal the remarkable come-from-behind win for the Celtics. Vujacic could be seen holding his hands up as if to say, ‘what happened?’ Similarly, Vladimir Radmanovic was a total cipher and couldn’t stay near Paul Pierce while Gasol appeared overwhelmed most of the series, a performance that undoubtedly drew a lot of chuckles in Memphis.

In the balloting for the 2008 Defensive Player of the Year award, Kirilenko was the only international player to get a vote. He got one. When the coaches picked their 2008 All-Defensive team, 36 players got votes. Three – Kirilenko, Ginobili and Andres Nocioni – got votes and none was close to making either of the two teams.

Defense was behind the success of the Spurs over the years. (And no, Tony Parker can’t guard his shadow, but he has been drilled relentlessly by Gregg Popovich into how to play a team concept.) This year’s Celtics’ team, which had no international players, won with its defense. But how many Kevin Garnetts are out there, even in the United States?

NBA executives will still spend and scout extensively overseas for, as we’ve seen in ever NBA draft, it’s a good futures pool. They’re not going to suddenly turn into hoop xenophobes and, as noted, the jury is still out on players like Bargnani and Yi.

But how many more teams need to win a title, like this year’s Celtics, before teams start talking about defense the way they do about offense? No one is talking about Gallinari’s defense – and his new coach in New York isn’t exactly known for it either. And to top it off, the poor kid got booed when he was announced to the New York fans attending the 2008 NBA draft at Madison Square Garden.

What else could he expect from the team that drafted Frederic Weis?