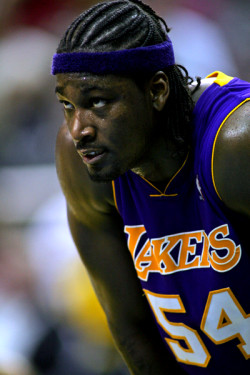 Faced with a “weird” situation with center Andrew Bynum, the Los Angeles Lakers are toying with the thought of bringing back Kwame Brown, a free agent.

Yes, this is the same Kwame Brown who rode out of town to a chorus of fan boos in a trade last February that brought Pau Gasol to the franchise. Brown is the former No. 1 overall pick that many consider the biggest bust in league history. Why would the Lakers want him back?

The Lakers made it to the NBA Finals last season and found themselves in a collection of dire mismatches with Boston. For starters, Los Angeles had no one to contend with Celtics center Kendrick Perkins’ size and strength. “They could have used Kwame in the Finals,” said one Lakers insider.

Tex Winter, the longtime coach and team consultant, was in Las Vegas to evaluate the Lakers’ summer league team. Winter said he is totally out of the loop on personnel decisions with the team and hadn’t heard of the Kwame deliberation, but Winter said it makes sense, especially for Lakers coach Phil Jackson.

If he’s cheap enough as a free agent, Brown could serve as an insurance policy for Los Angeles. Brown also has experience running the triangle offense, a plus. He could be important following the loss of restricted free agent backup center Ronny Turiaf, who signed a fat deal with Golden State recently. The coaching staff loved Turiaf and hated to see him go, but his loss is just one of a series of extremely tough decisions the Lakers face in the offseason.

Another tough situation is the team’s relationship with injured center Andrew Bynum, who has long been a pawn in the internal battle between the children of Lakers owner Jerry Buss, who are competing for daddy’s love and control of the franchise.

There was a time last summer when the tension between Jim Buss, who “oversees” basketball operations, and Jeanie Buss, who runs the team’s marketing management, seemed like it would erupt into open warfare.

Long known as a party guy who doesn’t even come into the Lakers offices on a regular basis, Jim Buss was viewed by the Jeanie Buss faction as the villain who fired Jackson in 2004, traded Shaquille O’Neal and hired ill-fated coach Rudy Tomjanovich. The messy series of events cost the team millions when Tomjanovich stepped down after coaching only a handful of games. Jackson, of course, is Jeanie Buss’ longtime boyfriend who was rehired in 2005 after the magnitude of Jim Buss’ blunder became apparent.

Since Jackson’s return, it has been the mission of Jeanie Buss to try to control and limit the ineptness of her brother, a nice guy who is said to keep his bartender on the Lakers payroll. Jim Buss, however, is the person in the organization who insisted on drafting Andrew Bynum in 2005 when the front office leaned heavily toward Sean May. That one pick has worked out so far, which is the one thing that Jim Buss clings to as evidence of his competence.

Yet the Jeanie faction in the Lakers organization stays awake at night worrying about what Jim might do or say next.

It wasn’t too long ago, for example, that Jim Buss told Bynum that Jackson wasn’t really very good at coaching big men, so Jim told the 19-year-old center that he should find his own coaching. When she learned of the comment, sister Jeanie supposedly said, “Jim, I don’t think you should say crazy things like that. They could have disastrous results.”

Sure enough, the Lakers coaching staff was hit with a bombshell in the summer of 2007 when Bynum announced he was not playing with the Lakers’ summer league team but would instead work with his own coach and trainer in Atlanta.

Bynum knows he is the pet pawn of Jim Buss and has used that status to stay apart from the team in many regards. In fact, his relationship with the team is “weird,” according to another Laker insider, and a legacy of Jim Buss’ lack of understanding of the concepts of basketball.

This has come to have frustrating and perhaps disastrous results once the talented young center injured his knee in February. Rather than trust the team doctors, Bynum pursued his own medical advice on how to deal with the surgery and recovery from the damage to the medial collateral ligament.

Supposedly, team doctors wanted Bynum to “suture” the knee, reportedly a standard practice after MCL surgery. However, Bynum’s personal doctor opposed it. When Bynum’s recovery ran into trouble, he turned to a second doctor who reportedly also opposed suturing. Again, the knee remained slow to heal.

Now Bynum looms as a huge question mark for the team heading into training camp. Will he be ready to go?

Laker GM Mitch Kupchak announced vaguely recently that Bynum would be ready for training camp. But Kupchak didn’t make it clear if team doctors had been able to see and clear the center for participation.

“Jim Buss created this situation by saying to him, ‘Go get your own guys,’” said the Laker insider close to Jeanie Buss.

Jackson has patiently put up with the situation.

“What other choice does he have?” explained the insider.

Then there’s Jackson’s fascination with Sacramento forward Ron Artest. Would the Lakers trade Lamar Odom to get him? Jeanie Buss supposedly insists that Odom is safe, but the Busses are moving through another summer of discontent, looking for an answer.

Who knows? Maybe Kwame will provide a voice of reason, or at least a little frontcourt muscle.