Artest worth the headache?

Artest worth the headache? 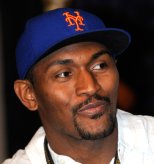 No, really, I think this Ron Artest trade has turned the West completely around.

Well, until the season starts, anyway.

After that, everybody in Houston will be on their own, as everyone always has been everywhere Ronnie has been. Even after a relatively quiet two-plus seasons in Sacramento, Ron Artest isn’t like anyone else – not even in the NBA, which is largely comprised of eccentrics.

He’s more like the crocodile in “Peter Pan” who swallowed a clock so wherever he goes in search of Captain Hook, Hook can hear him ticking.

Of course, it’s not totally impossible that, having tried everything else, Ronnie just shows up and plays… So what then?

Are the Lakers, Spurs, Hornets and Jazz going to swoon?

How about the young Trail Blazers with Greg Oden joining Brandon Roy and LaMarcus Aldridge on a team that was good enough to go 41-41 last season?

Even if the West no longer has all the super teams it did from 2000 to 2007 when the Lakers, Spurs, Kings, Suns and Mavericks posted nine 60-win seasons, the conference still has a wide selection of The Next Best Thing.

The Lakers should be better, not to mention more than a collection of cream puffs, with Andrew Bynum rejoining the team that made the Finals without him.

The Spurs aren’t what they were but with Tony Parker and Manu Ginobili in their primes and Tim Duncan close enough to his, they aren’t over, either.

The Hornets wouldn’t go away last season and may not this season either, with Chris Paul and Tyson Chandler still coming and a nice pickup in James Posey.

Utah is coming off back-to-back 50-win seasons, has won three playoff series in two years and has Deron Williams, The Chris Paul Nobody Knows, still coming, too.

Artest won’t be a patented misfit in Houston as Shaquille O’Neal was in Phoenix, turning the Suns, the team no one could guard, into a team that couldn’t guard anyone willing to involve Diesel in a pick-and-roll.

Nor will this be a cultural clash like Dallas turning over an offense built entirely on isolations to Jason Kidd and telling him to do his magic.

Unfortunately, the Suns and Mavericks got it backwards. Shaq was the Mavericks’ play but the Suns beat them to it. Kidd would have been fine in Phoenix.

The real problem for the Suns and Mavs was being in the West, where the burden of proof was so high. The Suns looked scary at the end, winning 15 of their last 20. Then they blew double-figure leads in Games 1 and 2 in San Antonio, the Spurs started running about 50 pick-and-rolls a night, Parker wound up averaging 30 points and the Suns wound up on vacation.

At the top of their game, the new Rockets with Artest, Yao Ming, Tracy McGrady, Luis Scola and Shane Battier would be truly formidable. They were already a tough defensive team and Artest is a lot tougher and a better defender than anyone they had, even Battier.

Now to see how close they ever come to the top of their game.

This isn’t like putting together an all-star team in baseball, where even if you hit third and I hit ninth, I’m still getting my three at-bats.  Basketball teams have to mesh. If Artest has a problem with Yao and Tracy getting more shots, this won’t work.

Artest has always been a unique talent, not only capable of scoring 20 points but of knocking the other team’s 20-point scorer down to 10 or so, whether the opponent is a two, a three or a four. With Ronnie’s big, wide body, he can post anyone up and command double-teams, freeing up others.

The problem – on the floor – has always been that he takes a lot of bad shots, then gets upset when he can’t take more and the offense goes through someone else, like Jermaine O’Neal. The overriding problem is that when Ronnie’s upset, we’re not talking about merely being upset.

This was still a slam dunk for the Rockets, who weren’t sure of getting out of the first round – and hadn’t since 1996. Great as McGrady is, the less you have to have from him, the better he is.

Rick Adelman is one of the last of the players’ coaches who can actually coach. He and Artest are already on good terms, from their half-season together in Sacramento.

In the most compelling reason, Artest is on the last year of his contract, so how much trouble could he be?

Oh, I forgot. He’s Ron Artest, capable of being more trouble than any team – or league – can handle. Remember the Auburn Hills riot that set the NBA’s image back about 40 years and is the reason we have to watch those “NBA Cares” spots? That was all Ronnie.

By the way, even if the East had something of a renaissance last season, this is why the league should seed the playoffs. With the overall imbalance, there’s an East mindset (what, us worry?) and a West mindset (us worry). That’s why 55-win West teams like the Rockets go out on limbs while East teams chill, as when Boston let Posey go.

Not that anyone knows how this particular move will turn out, but the West just got even more Western.