Shooting for a comeback

Shooting for a comeback 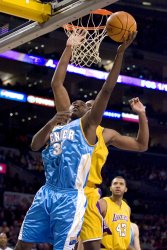 This is Julius Hodge, ACC Player of the Year in 2004 and former member of the Denver Nuggets and Milwaukee Bucks. I will be blogging here at HoopsHype.com all through the summer about my experiences as a free agent. Hope you enjoy it.

As some of you may already know, I’m now trying to get back in the NBA and have been working out with the Nets the last three months in order to prove that I belong in the league. I know there are another couple of teams that are interested, but I’m really liking the situation here in New Jersey. All these weeks with the Nets, I really think they have been very benefitial to me. The coaching staff is great and my guy Kiki Vandeweghe is helping me a lot. My jump shot, which is probably the weakest part of my game, has gotten a lot better. I’ve probably never worked as much or as hard any other time in my career.

I didn’t have much much success (or playing time for that matter) in my first two years in the NBA with Denver and Milwaukee. But I’m not bitter about it. It was hard at the beginning, I’ll admit that. You get from always being the main guy to not playing much and that’s a hard pill to swallow. But all in all, it was a learning experience. And besides, when you’re close to death, as it was my case with the shooting incident, it changes your whole perspective. You’re grateful about anything that’s given to you. You appreciate it’s a blessing just to get a chance to make a living playing basketball.

Physically, the shooting incident was a setback. Mentally, though, it was an inflection point. I believe I’m a better person now. More humble, more generous… I think not only I can help a team on the floor, but also in the locker room.

I know I have offers from teams overseas, but at this point… It’s just the NBA for me. There’s no such thing as a backup plan for me because I’m so focused in getting a job in the league right now. It’s not that my experience abroad wasn’t good. I played in Australia last season and I enjoyed it. It was pretty much my first time outside of the States and I had some adjustments to make, but life was good there. I was actually leading my team on the court and loved to be The Man again. Away from the court, it was nice also. It was 100 degrees pretty much every day, always with your shades on… Besides, I didn’t have to go through the language barrier most American players abroad have to.

Even though FIBA ball is fine, like I said my goal is the NBA. I can be a third point guard, a defensive stopper… Really, I can be an anything guy. And with all the adversity I have had to go through before, I can guarantee I’ll be a good guy anywhere I am.

Got to keep working out. Talk to you next week.