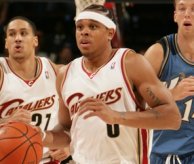 Free agent guard Shannon Brown signed with the Charlotte Bobcats yesterday, agent Mark Bartelstein told HoopsHype.com. Brown, who started the 2007-08 season with the Cavaliers, was sent to Chicago in the Ben Wallace trade last February and barely played for the Bulls.