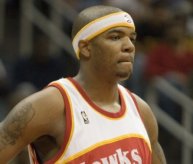 Do you enjoy taking part in things like the Adidas camp?

Josh Smith: Yes, I do. Because me being in the NBA, just being around the high school player and the kids from overseas, I give them motivation to work hard, pursue their goals and try to make it professionally.

I guess you were on the other side a few years back.You being the young promising player with veteran players around trying to teach you something… What’s your best memory of those camps?

What’s the feeling right now after signing the contract? Is it more relief than any other thing?

JS: It’s more relief and happiness. I’m just glad it’s over. Now I can move on, look forward and focus on being a better player and teammate.

And what was the feeling prior to getting it done?

JS: You know, I was actually real anxious. I wanted to get it over with. But I understand it takes time because, you know, that’s negotiations. I was anxious more than any other thing.

Did you think there was any realistic chance you would play for the Grizzlies?

JS: Anything is possible. I signed it, right? I know they was saying they were going to match, but you never know what could happen. So I was very realistic about the situation.

Did you expect it would take this long to get the contract done?

JS: I didn’t think so. We were coming off a good playoffs. Seven games with the world champions… I didn’t think it would take as long as it did. But at least it happened. It’s better than if it didn’t happen at all.

About those rumors earlier in the summer that you didn’t want to get back to Atlanta because of head coach Mike Woodson… What can you say about that?

JS: That’s just more false stuff that somebody put out there. I didn’t even say that. There’s not much I can say about it… It’s just people that hear things and then say things that are not true. And then people read it and actually believe what they read, you know what I mean? People actually believe that. All I can say is that I didn’t say that. Me and Coach Woodson have a good relationship. I actually was talking to him throughout the whole process before getting signed.

Are you concerned that there could be some misconceptions about you as a person? Because this is not the first time articles have appeared painting you as a problematic player, like that Peter Vecsey story back in the day…

How close to the best teams in the East will Atlanta be this season?

JS: I think we still can make the playoffs even though we lost Josh Childress, which was a key player for us last year. We have a real challenge. We gotta start playing and then we’ll see.

How much of a step back is losing Josh Childress?

JS: I think it’s a step back because Josh Childress did so much for the team, but I’m sure that Rick the GM is on the phones trying to figure things out and get something done to replace Josh.

Could you see yourself doing something like what Childress did, leaving the NBA for better money overseas?

JS: I’m not sure. It’s hard to say. I’d have to wait for an opportunity like that to present itself.

Anything you’ve added to your game this summer?

JS: Nothing in particular. You always try to improve your overall game, try to be a better all-around player. But nothing specific.