"Artest is not afraid to be the bad guy"

"Artest is not afraid to be the bad guy" 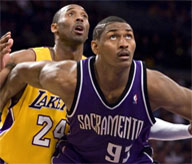 Do you think it’s time the NBA forms expansion teams in Europe to counter the Euroleague  pirating players from the NBA?

I think the NBA is the best league in the world, which means the best players will be in the NBA. The problem with having an expansion in Europe would be the logistics of scheduling and travelling across the Atlantic Ocean and even Pacific Ocean if you have teams in Asia. Players dream of coming to America and playing in the NBA. European teams can and will continue to pay top dollar for talented players, but as long as the NBA is the best basketball league in the world the best players will stay here.

If a Euroleague team came in for one of the NBA’s two best players, do you believe that they would accept? If it came to this, could you see the NBA having a higher salary cap?

Again, it would be just be about the money. A Euroleague team could throw an absurd amount of money at LeBron or Kobe, and can they entertain the offers and say it would be for the worldwide growth of basketball if they accepted the offer. But I really don’t think they would. These players make so much money now in salaries and off-the-court endorsements that leaving for one or two years would not change their lifestyles except that they would not be in the American spotlight anymore. I understand the competition level is increasing in Europe but it’s not at the level of the NBA. The top-tier players in the NBA like the challenges and are the ultimate competitors. If that is taking away by playing in Europe, it would defeat who they are and their inner drive to be the best. The only way the NBA changes its salary cap structure is if the league generates more revenue in other areas not because a Euroleague team would offer a top player $30-$50 million a year. You would be sacrificing the fabric of the game if the NBA did that and it doesn’t translate to the bottom line, which is winning a championship. Look at MLS Soccer and the LA Galaxy with David Beckham. Outstanding player. Good for the growth of game in America, but the team is still losing. It’s still a team sport.

Do you think the differences in style of play between the NBA and Europe contributed to Josh Childress’s decision to leave the Atlanta Hawks?

No, it had tall to do with the money that he was offered in Europe. And it’s a lifestyle decision. Maybe you play twice a week. Everything is paid for, like your house and car. You have a maid/butler and chauffeur. It’s still basketball, some of the rules are slightly different but it was going to happen with some quality NBA players sooner or later because the competition is very high in the NBA and jobs and big dollars are hard to come by.

A lot of it was natural and God-given ability. Like anything you want to get better at, you repeat over and over again. I always use to jump up and down on boxes before it was called plyometrics. I stayed on the court trying to touch the net, then the rubber on the backboard, then the backboard, the rim, then the square. I always set high (no pun attended) goals to reach and just kept doing it until I felt I achieved. I did no elaborate exercises or took any special powder or drinks. I just jumped all the time.

Do you think that the Rockets have now completed their goal bringing in Ron Artest? And will he be the guy they are looking for or he’s the same old Artest from The Palace?

I think the Rockets were always looking for that third option to complement T-Mac and Yao. He’s tough. He can defend and he’s not afraid to be the bad guy. Every team needs one bad guy. Look at the Celtics. Three top players. Lakers, Pistons, Spurs. They all have three top-tier players. You need that, especially in the Western Conference, where they were very good last year and got that huge winning streak. This moves put them right at the top of the list in the West with Lakers, Hornets and Spurs. The wild card comes in if Artest loses control and they can’t handle him in a positive way for the team.

Throughout the past few years a few problems have arisen regarding corruption in the NBA – Van Gundy (who was ordered to shut his mouth), Cuban (who was ordered to shut his mouth) and on a somewhat different level Donaghy’s recent charges. As a spectator it’s easy to take these stories and run, spreading rumors about how corrupt the organization is. As a player, however, I’m sure you have a much better perspective of what really goes on.  What is your opinion with regard to how much of a role management has in terms of deciding who wins games (for good storylines, more marketable teams, etcetera)?

I will keep the answer very simple. It doesn’t! The NBA is a huge industry and like every industry you have things that happen within that you can’t control. Like human behaviors: greed, envy, jealously, etc. Also like any major industry, you want the best bang for your buck. Was it great this year that the Lakers-Celtics were back in the Finals. Of course it was. A marketing and financial juggernaut for the league and both teams. But think of this… Those were the best two teams in the NBA last year also. Players have enough trouble trying to win games. It would be harder if the league tried to dictate who won or lost games. So as a former player, things get settled on the court. Management have to look at the big picture of how the business of basketball is operated. But the only way each team management can decide who wins or loses games is the largely based on the product the put on the court.

Dee, what do you think the Bulls will do with Ben Gordon? What big man can we get who can score down on the blocks for us? What kind of season do you see Tyrus Thomas having this year?

I think the Ben Gordon scenario is getting ugly and he’s seeking a sign-and-trade. He wants Deng dollars because he was the leading scorer and the Bulls don’t want to pay him that much. You already have a crowded backcourt with the addition of Rose, having Larry Hughes. And the Bulls refuse to part with Hinrich. That leaves Gordon hanging. With the acquisition of Drew Gooden, he should help with some inside scoring and veteran presence. But that will take minutes from Ty Thomas and maybe Noah. If Ty Thomas becomes a superb energy guy and develops a consistent 15-foot jump shot, he could be a guy that help bridge the gap from the starters and bench.

I’m curious as to how you enjoyed your time spent playing for the Toronto Raptors? Not just the organization, but how was playing in Canada and living in the city of Toronto in relation to all of the years you spent in the States?

I tell people all the time that Toronto was the one the best cities not only in the NBA but in the world! It was so diverse. The people was very nice. The city was unbelievably clean and there was hardly any crime. I lived downtown near the ACC, so I was walking distance from everything. I also went to Bloor to go shopping. It’s like NYC with all the theaters, restaurants and nightlife. When I got there, we were still playing in Skydome and then we moved to ACC. The fans were awesoma and I remember when Jordan came to Skydome, it was the craziest scene to see a baseball stadium full to watch a basketball game. Being a part of the first playoff team and still holding a few records there keep the Raptors close to my heart.

I’m from Toronto and I have to ask you about your thoughts on the new look Raps with JO in the middle. Are we a contender in the East? I like the low post/high post combo with lots of perimeter firepower (Kapono, Bargnani, AP even Calderon). What do you think? Can we get past Detroit, Boston and even Philly?

I like the addition of JO and he will be a great addition next to Bosh. Because JO has been hurt lately, people forget how talented he is and that he was once considered a top-tier player in the league. He’s still young in age but has been around for a while. Maybe the change of scenery will do him good like it happens with most great players. I think this team is a contender because you upgraded your talent… But so did a lot of team in the East. Plus you have the same cast of characters with Boston and Detroit. I really like what Colangelo is doing in Toronto. The key is if Calderon can be a full-time point guard and if the shooting guard position with Parker will be enough to compete.

I wanted to ask Dee I just saw him at SeaWorld in Orlando and he looks in good shape… Why did he end his career so early?

Great question. The reason why is so I can go to SeaWorld and enjoy it without thinking about training camps. No seriously, I stopped playing because I had so many things that I wanted to do while I was still young. I had several companies that I was running in the later part of my career and wanted to spend more time with my family. I played 12 years and I wanted to leave when I thought I couldn’t give 100 percent every night on the court, not because of my skills or not being in great shape (thanks for the compliment, by the way). Mentally you get so drained. I went into the front office of the Magic for a few years, coached in the WNBA for a few years and now do radio and TV for the NBA and ESPN. I also have a training facility in Orlando and I get to train and teach middle and high school players the game. I also train some NBA players like Grant Hill, Chuck Atkins and Drew Gooden. That’s what keeps me in such great shape. So I’m still connected to the leaguem but it’s on my time. By the way, the next day I was at Disney, then Universal! Ha-ha!