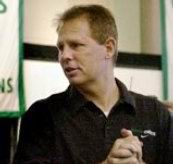 From the moment he took over the Boston Celtics, and continuing on to this very day, Danny Ainge has had one enduring philosophy: think outside the box. As in, way outside the box.

But in virtually every instance where his intuition failed him, Ainge has been able to recover by getting some other unfortunate soul to take on his mistakes. As the saying goes, it only takes one. And there always is that someone (unfortunately for Minnesotans, that someone has more often than not been Kevin McHale.)

The 2008 NBA Draft once again showed Ainge’s willingness to take a chance. It had nothing to do with the fact that he had just won a championship and could afford to gamble. He was doing the same thing when he was drafting after 24- and 33-win seasons. With the last pick of the first round, he drafted JR Giddens out of New Mexico, a somewhat surprising selection among the so-called cognoscenti. (The website NBADraft.net projected him as the No. 58 selection.)

Once the intrepid press went to work, it was discovered that Giddens had basically been booted out of Kansas, where he had been stabbed in a bar fight. An artery in his right calf was cut and the wound required 30 stitches to close. He ended up at the University of New Mexico where, in his first season, he twice wadaaincels suspended for what then-coach Richie McKay termed his inability to adhere “to the pillars of the program.”

Ainge has shown himself to be extremely open-minded on matters like these. Take the case of Rondo. After a stunning freshman season, the Kentucky guard went backwards as a sophomore. The body language stunk. There were clashes between a headstrong kid and the do-it-my-way head coach. What, Ainge wondered, had happened to the player the Celtics had targeted the year before?

The Celtics had the 7th pick in 2006. That might have been a reach for Rondo, but Ainge might well have taken him there, especially since Brandon Roy was gone and Randy Foye didn’t excite the Celtics all that much. But instead, Ainge engineered a trade for Telfair.

Then, Ainge went to work to try and get Rondo, as he saw the Kentucky guard drop further and further in the first round. Finally, at No. 21, Ainge got the Suns to draft Rondo, trading a future first-rounder in a loaded draft class (2007.) Where others saw a history of conflict, a cocky kid and a guard who wasn’t anything close to a classic point guard, Ainge saw athleticism, defensive ability and intelligence, and wasn’t the least-bit put off by all the negativity emanating from Lexington, Kentucky.

“You know,’’ he said, “it isn’t always a bad thing when the player and the coach don’t see eye to eye. We interviewed a lot of people before we drafted Rajon. We heard all the stuff; he was cocky, uncoachable, all that stuff. But at the end of the day, we thought he’d be a good addition to our basketball team.”

Clearly, they’re hoping the same thing from Giddens, although he will have to fight for minutes. Giddens had an uneventful senior year at New Mexico (in terms of distractions, that is) The Celtics also are hoping for similar things from their second-round pick, Billy Walker out of Kansas State. His story brings to mind one of the recent Boston successes – Leon Powe.

Like Powe, Walker was a high school hotshot. Like Leon Powe, he suffered two torn anterior cruciate ligaments. Like Leon Powe, Walker went from being a likely lottery pick before the injuries to a second-rounder. (Sonny Vaccaro, the legendary shoe mogul and high school talent guru, told ESPN The Magazine that the pre-ACL tear Walker was the second coming of Vince Carter.)

The actual drafting of  Powe was the result of some quick work by Ainge’s lieutenant, Leo Papile, who had fallen in love with the University of California big man while scouting him in the 2005-06 season. Papile also had seen Powe in high school, when, in 2003, Powe was mentioned (almost) in the same breath as LeBron James. Powe thought about turning pro out of high school; destitute does not begin to describe his home situation at that point in his life. But the ACL tear did him in. Another tear came after his first season at California.

Powe declared for the 2006 draft, despite having two years remaining of eligibility, but the knee injuries and questions about where he would fit in combined to send him tumbling into the second round. Papile started frantically working the phones. The picks go quickly at that point – two minutes a choice – and Papile finally convinced the Nuggets to draft Powe and trade him to the Celtics. The Walker transaction was essentially the same thing. If it works out as well as Powe, the Celtics will really be on to something.

Should Walker or Giddens be any kind of help to the Celtics, they will join the list of late first- and second-rounders who have been able to contribute. Kendrick Perkins was the 27th pick in 2003. Delonte West (24) and Tony Allen (25) were picks in 2004. Ryan Gomes was the 50th pick in 2005. Powe was the 49th pick in 2006 and, in 2007, the Celtics feel they got a couple of keepers in Gabe Pruitt and Glen ‘Big Baby’ Davis, both taken in the second round.

While Pruitt should get time this season, Davis was a revelation of sorts as a rookie. On draft night in 2007, there were rumors he had a deal with a team to take him in the first round. It didn’t happen. He was large (to be charitable) and that could have scared away some teams. But watching the guy on the floor, he simply knows how to play. He has power, good hands and even some beguiling finesse. He held his own when Tim Duncan came to town. He personally beat the Pistons in a huge regular season win on the road.

But, knowing Ainge, any or all of the above could also be future ex-Celtics. That was the case for Al Jefferson, Gomes and Telfair, all of whom went to Minnesota in the Kevin Garnett trade. West went to Seattle in the Ray Allen trade.

By now, however, Ainge has enough chips, not to mention newfound cachet, to keep doing what he’s always been doing. Whether it’s trying to coax Reggie Miller out of retirement for one last run, slightly preferring Kevin Durant to Greg Oden, or drafting a kid with so-called “issues,’’ he is not going to shy away. Expect the unexpected.

Where others see potential trouble, Ainge sees only potential. More often than not, history has shown him to be on the mark.