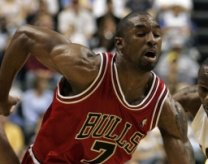 Three guys show up for their job orientation and who knows what they did, though it seemed to involve drugs and sex. Another guy makes a video apparently demeaning his country and finding enough vile words for an HBO special.

It means our favorite guys are back.

Yes, it’s just about time for the NBA season.

Of course this is an overstatement. But that’s the inescapable burden of the NBA. I’ve been around this league for almost 30 years and believe its people are better than in any sport. No, golf isn’t a sport.

But part of the fun of loving the NBA is our guys do some goofy stuff.

My preseason nominations are the Kansas Three, rookies Mario Chalmers and Darrell Arthur from Kansas and Michael Beasley from Kansas State. No, kids, you aren’t in Kansas anymore. And you shouldn’t have brought Dorothy to rookie orientation. Or her sister.

Then there’s Josh Howard, who slammed the national anthem this summer on a video (don’t these guys ever learn, Melo?) as the topping for his drug use admissions last season and excess partying in playoff defeat.

I’m told all Dallas Mavericks players this season when standing next to Howard will have to wear those “I’m with stupid” t-shirts that Kenny’s mom wears in South Park episodes.

And then there’s Ben Gordon, who really is a very good and decent guy, who seems to have turned down enough money to bail out Wall Street while working through an aimless free agency.

Reg was a troubled young man who was one of the first to be drafted by the NBA without attending college. He was a seven footer from Detroit. He played four decent NBA seasons (twice even averaging a double/double through trouble shortened seasons) and one double/double season in the ABA, and was shot dead on a Detroit street corner in 1972 at age 30.

Reg wasn’t the brightest guy and so the story goes once, wearing a mask, he decided to rob a store in his neighborhood. The owner recognized Reg as there weren’t a lot of seven foot holdup men around.

You’d think Ron Artest retired this trophy, but Josh is working hard to wrestle it away.

Eventually, Gordon will be a rich young man. You’d say he probably is now since he’ll likely sign a one-year qualifying offer for about $6.4 million this season and thereafter become an unrestricted free agent.

That’s the rub, and I understand Gordon’s position, much stated to the Bulls.

Ben: “I’m the leading scorer on the team for the last three years. I should be highest paid.”

Bulls: “We like you and believe you are valuable and would like you to remain with the Bulls. But you turned down $10 million a year for five years last year and you and the team had a bad season. So we’ll offer you maybe $9 million or so for six years, again more than $50 million. But you really are a classic sixth man, a great scorer with limited ballhanding and passing skills and you’re, what, six foot tall? We haven’t gotten any trade offers for you (OK, Miami said they were thinking briefly about Shawn Marion and Marcus Banks, but who wants Banks’ contract and Marion’s pout?). Go get an offer somewhere and we’ll make a deal. And, who, after all, is going to give you $10 million or more of saved cap room next summer when everyone is waiting for 2010 and LeBron, Wade and Bosh?”

And so Gordon sits with the rest of us suckers watching our money disappear.

Hey, I should have sold my house last year. But I didn’t. Now I can’t.

Sorry, Ben, the market for six foot shooting guards, no matter how good a guy you are and hard you work, isn’t there.

OK, not as rich as some of your friends.

But, hey, the guys at Lehman Brothers thought they were rich last week.

I understand well how this works.

No, it’s about competition.

You don’t become a pro athlete unless you compete at everything. They compete in conversation. So when all us old timers who are trying to find the airline without baggage fees say you are rich whether you make $8 million or $12 million and never can spend it all, anyway, we don’t get it.

It really isn’t about the money. Sort of. No one really realizes how good they are until you try to play against them. What gets you to that level is the desire (and we’d love to see it more often when they are there) to compete all the time.

I hate this being him because he is a dedicated guy. I’ve traveled with the Chicago Bulls on and off the last few years and just about every city the Bulls land in Gordon gets off the plane and heads directly to a gym to shoot. There are few guys in the NBA who practice as much, certainly not on their shooting. Every summer, Bulls coaches rave about all the work Gordon has put in.

And then it turns out he’s still six feet tall.

No one on that Bulls team gets as much defensive attention, so it didn’t go so well with Ben Wallace averaging $15 million. Geez, and the guy can’t make a layup.

So this summer Luol Deng signed after he rejected a deal last year close to $60 million for five years. It was announced this time at more than $70 million. But with, according to league sources, perhaps $20 million deferred in the first five seasons, the present value of the contract is believed to be slightly less than Deng was offered last season. The Bulls are believed to have made a similar proportional offer to Gordon, like Deng, slightly less than Gordon could have made last year. But seemingly a lot of money.

Gordon averaged more points than Deng as well and now Larry Hughes is there making about $13 million a season and he’s no Ben Gordon. Where’s the loyalty?

It seems clear the Bulls will not trade him, and though Gordon this summer talked of having played his last game for the Bulls and never playing for the qualifying offer, he has nowhere else to go.

Were he even to get an overseas offer, he’d still be a Bulls free agent when he returned as you cannot by rule play out your free agency somewhere else. Plus, the European offers have been even less than the qualifying offer and much less than Gordon keeps rejecting here.

So he’ll come in and disrupt the team by, what, shooting all the time?

It’s what he does.

Gordon’s not going to hurt the team, and the Bulls know it.

First, he’s not a bad guy, and he would become unrestricted if he signs the one year offer. Not a great time to lay down.

Plus, he always comes in shooting anyway. What’s he going to do to undermine the team? Pass?

So the Bulls will panic because they can’t afford to lose him in free agency and get nothing in return? Right? Hardly.

Admittedly, it’s not a great free agent class next summer, though Carlos Boozer and Hedo Turkoglu could be there. The teams most likely to be $10 million or more under the cap to sign someone unrestricted likely figure to be from among Memphis (not spending money), Oklahoma City (probably not with the big relocation fee due), Portland (got guards), Miami (going for Boozer, we hear), Indiana and maybe Minnesota. So if you are spending, you lock in Ben Gordon and pass on a chance for Wade or Bosh? LeBron is going to New York or New Jersey, as we know.

No. If Gordon wants to go anywhere and get paid he probably would have to come back to the Bulls anyway for a sign-and-trade. Which is why the Bulls don’t seem in any hurry to make a deal.

And with a signed Deng and No. 1 pick Derrick Rose, they need Gordon. Who else is going to score? Gordon has a chance to have a terrific season, and perhaps the team improves as a result.

The Bulls have made it clear they aren’t going to make a bad deal to accommodate Gordon, and they aren’t about to panic. Most Americans’ portfolios don’t look like they did two weeks ago, and so the timing isn’t great for Gordon, either.

But Gordon still has a chance to be guaranteed some $50 million or more. Hey, it would be more than Josh Howard got.

I know, I know. Bad example.

My guess: Gordon ends up re-signing with the Bulls at some point.