Back to the old days

Back to the old days 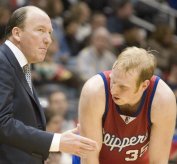 OK, who out there remembers that spring two years ago when it was the Clippers, not the Lakers, who owned L.A.?

Not that it was such an important milestone since the Clips would soon re-cross it, going in the direction they had come from, after rising from decades of ignominy to reach the second round of the 2006 West semifinals and putting Phoenix on the ropes.

They’ve been rolling and tumbling ever since. It’s still not like their old Dark Ages but if they don’t handle things right, a round trip won’t be out of the question.

Reconfigured as this season’s team is after the mysterious loss of Elton Brand and the departures of Corey Maggette and Shaun Livingston, talent isn’t the problem.

With Baron Davis, Chris Kaman, Marcus Camby and last season’s rookie find, Al Thornton, they may even still have a shot at the playoffs if everything works out spectacularly.

Of course, everyone in the West has the same problem with all eight slots appearing to be spoken for by the Lakers, Hornets, Jazz, Spurs, Suns, Rockets, Mavericks and Trail Blazers.

In addition, the Clippers have one problem no one else has: Themselves, which is to say their front office, which is really to say madcap owner Donald T. Sterling.

Before reverting to type last season, Sterling was coming off the best years of his career as an NBA owner, which coincided with the hiring of coach Mike Dunleavy.

Investing in Dunleavy as he had never invested in anyone, Sterling gave his coach control of the entire basketball operation to go with a four-year, $22 million extension – more than the rest of Donald’s coaches had made put together.

Arriving at a good time in 2003 with profits flowing and a roster loaded with good young players, Dunleavy took them into the second round, where no team in the history of the franchise in Los Angeles, San Diego or Buffalo had ever been… Where they were about to take a 3-1 lead until Raja Bell tied Game 5 with a three-pointer with :01.1 left in the first overtime in Phoenix.

The Suns won in double overtime and ultimately put them away in Game 7 back in Phoenix, ending the Clipper Spring, amazing as it was with their TV ratings eclipsing those of the Lakers, whom the Suns had ousted in the first round.

Jack Nicholson even came to Game 5 in Phoenix, although Brand joked later, noting the fact they had lost, “We’re not sure Jack will be invited back.”

It was good they enjoyed it because it soon ended. They missed the playoffs in 2007 when Sam Cassell turned back into an old man after his salary drive the year before and Livingston was lost after his devastating knee injury.

Last season was a disaster before it started with Brand tearing his Achilles tendon, but that was just the start of their problems.

With nothing to do but endure this disaster, Sterling turned back into Donald Sterling, targeting Dunleavy in one of the rare interviews he granted, telling the Los Angeles Times’ T.J. Simers he might “make changes.”

Dunleavy, fearing he was being punked in the eyes of his players, fired back, daring Sterling to fire him, dropping hum the owner’s Seventh Circle of Hell.

Sterling put Dunleavy on ice, refusing to accept his apology or even take his calls – which posed a problem since Mike was running things, assuming anyone was.

I guess you can see why Donald doesn’t do more interviews.

Aside from undermining his coach, it had been totally meaningless. With Dunleavy’s $22 million deal kicking in, Sterling wasn’t about to fire him if they lost the rest of their games and they came close enough, going 6-26 after the All-Star break to finish 23-59.

They paid a horrible price for their dysfunction. At the trade deadline, the Clippers were close to agreement with Memphis on what would have been a companion deal to the Grizzlies’ trade that sent Pau Gasol to the Lakers. This one would have sent Mike Miller to the Clippers for the expiring contracts of Cassell and Aaron Williams and their No. 1 pick.

The principals were down to how much lottery protection the draft pick would get but Sterling refused to OK it.

Dunleavy couldn’t even talk to his owner on the telephone. The request had to be forwarded by team president Andy Roeser. With Sterling always reluctant to give up draft picks who work so cheap, it died there.

Only then did Sterling reconcile with his coach.

Things picked up last spring when the Clippers got lucky with Baron Davis, who had always wanted to come home and was at loggerheads with the Warriors over a new deal. However, no sooner did they sign Davis then they lost Brand.

What happened may always be a mystery. Everyone’s favorite Clipper, Brand set new standards for loyalty and service in seven seasons with them (although he tried to leave in the only other chance he had, signing an offer sheet with Miami in 2003 and begging Sterling not to match it).

Dunleavy, with whom Brand had been close, said Elton helped recruit Davis, volunteering to take less money to make it happen. Brand and his agent, David Falk, acknowledged Elton made a verbal deal with Dunleavy – which, Falk pointed out, was a violation of the CBA.

Whether it was Falk who turned him, Brand definitely turned on the Clippers during negotiations, refusing to return their calls and using their offers as a wedge to get more out of Philadelphia, even as the Clippers promised to renounce as many players as they had to to beat the 76ers’ offer.

Now Dunleavy is picking up the pieces, yet again. Happily, he has some good pieces which lend themselves to a new uptempo style, rather than playing half-court basketball and pounding the ball inside to Brand and Kaman.

However, they’re in fast company and this will also require stability in their front office.