League not immune to crisis

League not immune to crisis 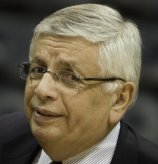 Bob Whitsitt, now a sports and business consultant, was one of the most successful team sports officials in the 1990’s, executive of the year in the NBA and general manager of NBA and NFL teams. He recalls a day talking to various members of his team and staff about the U.S. fighting a war again.

“Our country is at war and I’ve got guys who didn’t even know literally what I was talking about,” recalled Whitsitt in an interview last week. “These guys are not stupid people. But they just expect the paycheck to just show up. Sometimes you need to step back and appreciate what a great deal you have here.

“Guys think owners have unlimited pockets and the money is everywhere. Well, c’mon,” adds Whitsitt. “These are going to be interesting times.”

That’s because the economic crisis that is involving Wall Street and Main Street may end up in court as well, namely the 94 by 50 one that NBA players have come to assume is immune from the hardships that face the rest of the world.

“Let’s say this coming February or March a whole lot of NBA offices are going to be hoping the economy really improved,” says Rick Welts, chief operating officer for the Phoenix Suns. “Because next February or March is when teams expect commitments for the following season.

“We’re not there yet,” added Welts, “but this all, obviously, impacts the money available in player salaries.”

No one is about to feel sorry for an NBA All-Star who has to “settle” for $8 million per season.

But the forces are beginning to form in the general economy that could lead to NBA salaries and revenues rolling back along with the rest of the economy.

About time, you say.

It would be interesting to see, and it’s not far fetched for perhaps the first time in the NBA in the last 25 years.

Let’s be clear here. No great depression is imminent for the NBA and its players and teams because finances for the 2008-09 season are pretty much assured.

If the federal “bailout” deal is a success, it should be business as usual. But that remains to be seen for the entire nation.

There is a national media deal which all teams share, and then there is local ticket sales, broadcasting and sponsorships, the latter which effectively spell the difference between economic success and failure.

Commitments for season tickets, broadcast rights and advertising are pretty much locked up in the early spring. And while there were mumblings about housing issues back then, there seemed to be no great panic on the horizon.

So NBA teams are basically in good shape for this season.

But there are signs already.

The Suns remain one of the NBA stars on the business side. NBA sources said their season ticket renewal rate for this season was about 95 percent, one of the best in the league. But league sources say about four percent declined to follow through on their commitment despite putting down hefty deposits.

The Phoenix experience is not unique. Some team officials say it’s been happening all around the NBA and teams, despite having the majority of the commitments remaining solid, have begun to increase the number of partial ticket plans, increase and encourage group sales, ease payment terms on the tickets and divide up suites to sell per game or for partial season.

Sponsors also are starting to back off in some spots with team officials from several teams saying they are seeing fewer commitments from home builders and mortgage companies, for obvious reasons, and the growing fear about the effects of major financial failures, especially in New York.

New York, Chicago and Los Angles, the three largest markets, generally are unaffected by the economy. With poor teams most of the last decade, Chicago and New York have remained among the top daily grossers in the NBA along with the Lakers, who have been more competitive.

Also, it’s generally agreed around the NBA it’s easiest to sell the most expensive tickets, the courtside and lower bowl tickets. Now, some teams are beginning to wonder about that so called given with the pressure that is being generated on CEOs and spending that seems frivolous or wasteful, like sporting events.

That effect should be seen for next season’s renewals even if the economic rescue plan is successful.

All of this also is likely to lead to serious questioning of the NBA’s Collective Bargaining Agreement, which expires after the 2010-11 season. And even though there is an option clause it’s not likely to be exercised.

That’s because when the last agreement was signed, NBA commissioner David Stern did a disservice to his teams and players’ chief Billy Hunter did a disservice to the majority of his membership. Don’t be surprised if there’s some work stoppage in trying to remedy the issue.

It’s the length of contracts, which has been a huge burden for teams. It’s become evident with a dozen or more players with eight-figure contracts being bought out, released or left to wither on the bench because of lack of production. It was a sensitive issue at the time, and to get a deal, Stern felt the need to agree to five and six-year contracts instead of more reasonable three and four-year deals supported by many within the league. The NHL was out on lockout for the season at the time and Stern didn’t want his league to join in the bad publicity while some owners with dual arenas couldn’t afford both leagues dark.

Now with so many of the top stars, like LeBron James, Dwyane Wade and Chris Bosh, voluntarily seeking shorter, three-year deals, it seems clear that is a long enough time period for a contract and supported by the stars of the game.

It seemed a good deal for the players and an issue its union wouldn’t budge on. But the effect, especially if there is a downturn in revenues from the economic crisis and players’ salaries are adjusted downward, is so much guaranteed money going for buyout players and thus less left for the so called middle class player.

“You want to put those dollars back in the pockets of guys who are producing and not paying guys not to play,” notes Whitsitt. “Giving guys $20 million to go away hurts the product and hurts the team.”

Another issue that is likely to come up again with the economic crisis is the NBA’s continuing slide, like some say with the country, toward a greater division between rich and poor.

Big markets traditionally have been immune to their teams playing poorly. They’ve been able to be profitable anyway. Plus, those big markets have greater revenues from local TV and advertising. So they drive the increases in the salary cap with their bountiful local market revenues.

Now, the economic issues will be putting a greater strain on the typical fan to attend games compared with larger markets that should have a bigger business base to draw from even with some major companies suffering.

Lamented one marketing executive: “The guy is being hit with big gas increases, housing costs. He can’t sell his house. Maybe he can’t buy. He’s worried about his retirement income. We become a luxury pretty fast.”

According to Team Marketing Report, the average NBA ticket last season was almost $50 and almost $300 for a family of four to attend a game. It seems likely fewer individuals and families are going to be able to afford that kind of entertainment.

It usually was said sports and movies were recession proof, though it seems questionable for sports at those prices.

What’s likely to continue is the shift to watching the games on television, especially with more high definition service and national league packages for sale.

It can be something of a financial offset since teams can charge greater advertising rates if TV ratings are higher. But it hardly makes up for the loss at the box office, and figures to hurt the small markets most.

Of course, there are exceptions, and you cannot even buy season tickets in Oklahoma City with the team moving from Seattle. Also, the NBA went a long period with attendance increases with new arenas being built. That trend seems about over now as it’s also going to be increasingly difficult to find financing for a new arena in this credit market. It also figures to affect teams that are for sale as potential new ownership groups are saying it is becoming more difficult now to put togethe r a group and get financing.

“There are only so many Paul Allens,” says Whitsitt, who long worked for the Trail Blazers and NFL Seahawks owner. “They already have teams or don’t want teams. Buying you look for a combination of equity and borrowing and it’s difficult to grind out.

“A lot of guys like to talk and pretend they are experts,” says Whitsitt. “The truth is none of us really know what is going to happen. But logically things don’t look good across the board.”