In Nellie we trust?

In Nellie we trust? 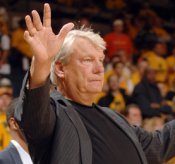 What’s that definition of insanity?

Doing the same thing over and over again and expecting a different outcome?

A cynic might note that’s an apt description for the coaching career of Don Nelson.

He’s just begun his 30th season of NBA coaching (he’s doing a second stint with the Golden State Warriors), to which he brings a career record of 1,280 wins against 954 losses, about 57 percent.

You could say that on many nights Nelson has got what they call that 2,000-game stare, except that his hoops habit runs much deeper than that. Nelson also played 14 years in the league, another (1,200) games including playoffs.

So that’s 44 years and better than 3,500 games (including exhibition games and playoffs). That, my friends, is a a lot of basketball.

In all that time, Nelson has never coached a championship team.

In fact, he’s never even coached a team that advanced to the NBA Finals.

At one point in the 1980s, Nelson’s Milwaukee Bucks teams won six straight division titles, but they flamed out each year. If it wasn’t Dr. J and the Philadelphia 76ers standing in Nelson’s way, it was Larry Bird and the Celtics.

For all of his years of coaching, Nelson has a big “nada” when it comes to the playoffs.

He did play on five Boston Celtic championship teams (1966, 1968, 1969, 1972, 1976, a nice little ring collection), and this season marks the 40th anniversary of Nelson’s huge moment late in Game 7 of the 1969 championship, when Boston was leading the Los Angeles 103-102. The Lakers’ Jerry West knocked a ball loose, and Nelson picked it up and threw up a dubious shot that hit the back of the rim, rose high in the air and fell back through the hoop.

It has long been considered the shot that sealed the Lakers’ fate in their sixth championship loss to the Celtics. Forty years later and Jerry West still has a hard time when he sees Nelson or hears his name.

Anyway, Nelson has never been so lucky as a coach. Not even close. He’s wasted a couple of 60-win seasons, and a 59-win season, plus innumerable other good campaigns. All of them ended in playoff flame-outs.

The numbers suggest a reality that may have New York Knicks coach Mike D’Antoni waking up with night sweats.

Nelson has long been the ultimate “small ball” innovator in pro basketball. And D’Antoni has been a top disciple of that faith. In fact, Nelson’s Warriors team got up even more shots than the Phoenix Suns last season.

“He’s always been able to make other teams play the way he wants to play instead of the way they want to play,” triangle offense guru Tex Winter says of Nelson. “He sees the game and he has ideas about how it should be played.”

For those reasons, Nelson has long been considered an innovator. Winter lauds Nelson’s tremendous success over the long haul.

During the regular season “small ball” always presents opponents trouble as a “one-game philosophy,” Winter says. “But it becomes a question mark when you get locked into a seven-game playoff series. That changes things considerably for those teams that want to play small ball or run a lot.”

As a result, Nelson’s impact on basketball philosophy has been bigger than his ability to win the big one.

That’s almost a moot issue for the Warriors, a franchise that has struggled for years to get it together. Golden State’s ownership is quite happy with what Nelson has done in his latest stop there.

In 2007, he chalked up 42 wins, just barely got the eighth seed in the playoffs and pulled a stunning first round upset of the no. 1 seed, the Dallas Mavericks.

The playoff victory goosed a long-suffering Warriors fan base that knows basketball and frankly deserves better.

For 2008, Nelson boosted the team’s win total to 48 but the Warriors just missed the playoffs in the challenging Western Conference.

Still, it was the first time the club had had back-to-back winning seasons since 1991-92, when Nelson was in the midst of his first coaching tenure with the Warriors.

“We’re elated that Don has elected to sign an extension,” Rowell said in making the move. “He has proven to be one of the most successful and innovative coaches in the history of our game and his continued presence on the sidelines is certainly a prominent asset for our team and organization.”

“It wasn’t my idea,” Nelson told reporters. “It was fine with me to weigh it year to year. But they came to me and wanted me to commit to three years and, uh, I’m pretty excited about it. It’s quite an honor really to be wanted. At my age, you’re lucky if anybody wants you. Hopefully your wife.”

In less politic moment, Nelson confided his true feelings to reporters recently, saying that “an ass-kicking veteran team that would have a chance to win a title is what I deserve at 68.”

(The comment brings to mind that Clint Eastwood quote from “Unforgiven”: “Deserve’s got nothing to do with it.”)

Ah, the circumstances. They’re a bit complicated with the Warriors. First, June 30 brought the shocking news that point guard Baron Davis was opting out of the final year of his contract and walking away from $17.8 million. He stunned Nelson by signing a five-year, $65 million contract with the Los Angeles Clippers a week later.

“When you lose someone of his talent and stature, it’s hard to replace,” said Chris Mullin, the Warriors’ executive vice president of basketball operations.

The organization figured it would have talented young shooting guard Monta Ellis to move to the point. But Ellis was injured in a summer moped accident that infuriated ownership and left him suspended during his months-long recuperation for violating his contract provisions.

On the plus side, Corey Maggette (22.1 ppg, 5.6 rpg) signed a free agent contract with the Warriors after spending the past eight seasons with the Los Angeles Clippers. But the net for Golden State means that the bulk of Nelson’s roster is under 25.

Instead of a veteran team, he’s got a young one, a roster with no proven point guard, no real power forward, just the circumstances for Nelson to do what he does best: Innovate.

“Our philosophy has to change a little bit,” Nelson had said even before Ellis was injured. “I played mostly my veterans last year, trying to get to the playoffs, and we didn’t do it.”

Long known for letting his players play, Nelson admitted he was going to have to become more of a teacher. And he had plans to require his players to become better students of the game, more video study, more fundamentals, etc.

It wouldn’t hurt if they rebounded and defended better too.

Nelson’s immediate answer has been to put the ball in the hands of Stephen Jackson, to make him more of a point forward, and to align him with one of the several unproven young point guards on the team. In the early going, the results have been mixed.

The developments all make it easy to predict that the Warriors are heading into what appears to be another winter of their discontent, and apparently the job of team executive Chris Mullin hangs in the balance. Team president Robert Rowell, upset over the handling of the Ellis issue, appears reluctant to extend Mullin’s contract, which is scheduled to end after this season. And there are stories circulating that Mullin had negotiated a new contract with Baron Davis only to have Rowell reject it.

Yes, things are pretty much a mess with the Warriors, with some observers speculating that Nelson is making moves to gain control over the front office by replacing Mullin, the loyal friend who hired him.

“No. No. Don’t want to be. No,” Nelson told the San Jose Mercury News. “I’m not interested in general manager, or coach and general manager, or anything else. I’ll support Mully the whole way. I hope he gets his deal done as well. I love working with Mully. I’m a coach. Period.”

A coach indeed, one with a determination to keep on rolling and looking for better things in the world to come.