Jury is out on Iverson trade

Jury is out on Iverson trade 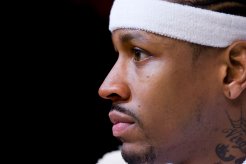 This trade just came from out of nowhere. I am shocked, but Joe Dumars has proven on a consistent basis that he can see things a little ahead of most general managers. The only hole on Dumars’ resume is not drafting Carmelo Anthony or Dwyane Wade instead of Darko Milicic. Yes, they won a title without them, but it could have possibly been a few more and the trade for Allen Iverson would not be necessary.

Dumars is not afraid to step out of the box. He parted ways with Rick Carlisle after getting to the conference finals and he replaced Larry Brown after winning a championship. Now he trades his most dependable player – Chauncey Billups – for his exact opposite – Iverson.

The question I ask is, why? I have come up with two reasons.

The first reason is economics. Billups has two years plus a team option left on a $46 million contract. The Pistons think they have a Billups clone in Rodney Stuckey sitting on the bench. They looked at the chance to secure a top-notch star in Iverson, who has an expiring contract to go along with their best all-around player, Rasheed Wallace, who also is in a contract season.

Now we begin to see what Dumars is thinking about. He is rebuilding his team for the future while taking one last shot at a championship. If the ploy fails, then Dumars will conduct a sign-and-trade or allow Iverson and Wallace to walk at the end of the season, thus turning over a young team with one very good veteran in Richard Hamilton, who just agreed to an extension, to new coach Michael Curry.

This leads me to another reason… Players leading the asylum and not the coach.

It has been quite obvious that this unit has been together too long. When I watched the Pistons over the last few years, I felt like they coached themselves. They had more meetings as a group before huddles and after huddles than any team I have ever seen. The average fan would probably think that is great and it sends a message about how close and trusting the Piston players are of each other – which is a true observance. But what they don’t see is the message sent to the coaches… That they are secure in what they should be doing and are beyond help from the very person that is paid to lead them.

Flip Saunders is a very good coach and he never got the chance to coach this unit and I believe Joe Dumars is not going to allow Curry to succumb to the attitude and stubbornness of this veteran team.

Although money is a major concern, I believe this second reason is what encouraged Dumars to set up the reconstruction of this team and start to focus on young players like Rodney Stuckey, Arron Afflalo, Amir Johnson and Jason Maxiell.

He cannot continue to change coaches every few years and I agree it is time to break up the dominant attitude of a veteran team that has not lived up to expectations since the 2004 championship.

First, let me say I love Iverson. I think he, along with Isiah Thomas, is the toughest and most physical player in the history of the league regardless of size. Iverson is definitely the best scoring small player ever in this league and will be a first ballot Hall of Famer when he retires, but the jury will be out for a while on how he will mesh in Detroit.

Detroit is a methodical offensive unit and I wonder if Iverson can control himself early in the shot clock to allow Detroit to control tempo. The last methodical team Iverson played for was Philadelphia, but he was first, second and third option there. That will not be the case in Detroit, so it will be interesting to see how he fits in and also how Curry plays him. Does he start? Does he come off the bench as a potent sixth man and Stuckey starts or does Hamilton move to the three spot and they play small with Rasheed at center?

I imagine Curry will try all of the above, but the Detroit fans better enjoy it because the rebuilding phase has started.

Will Billiups excel in Denver?

A resounding yes is my answer. This is a huge pick-up for Denver. Billups will bring stability, confidence and leadership to a team that up to now had no idea how good and talented it is. Billups will allow Carmelo Anthony to become the best small forward in the Western Conference. Anthony fought for shots playing with Iverson, but now he has a star in Billups that could care less about points and can get players like Nenê, and JR Smith to produce solid numbers as well.

Finally, George Karl has to convince Antonio McDyess to stay in Denver to play a role similar to the one Marcus Camby used to play there. The Nuggets then will definitely have a chance to compete for a playoff spot and become another in a long list of talented Western Conference teams.