Age and injuries are haunting the team

Age and injuries are haunting the team 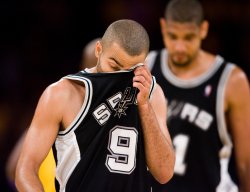 During his tenure as San Antonio Spurs coach, Gregg Popovich has shown a great ability to navigate his team through the rigors of a grinding 82-game regular season schedule. Popovich wouldn’t burn out players just for the sake of winning a few extra games. What was important was having his team ready to go for the postseason.

And the results have certainly validated Popovich’s strategy with four NBA championships and two more trips to the Western Conference finals since 1999.

Popovich has adeptly used the regular season as a five and a half month postseason tuneup.

This year things are different.

Due to some key injuries to an already aging roster, the Spurs could find themselves in the fight for their lives just to earn one of the eight Western Conference playoff spots.

While nobody can minimize injuries to Tony Parker and Manu Ginobili, the Spurs have some serious questions.

Ginobili isn’t expected to return until next month in his recovery from ankle surgery. The ability of Gnobili to generate instant offense has been sorely missed.

And if that wasn’t bad enough, Parker is expected to miss four weeks after spraining his ankle in a 99-83 loss on Nov. 7 against the visiting Miami Heat.

Parker was off to his best start, averaging 27 points in the first five games, and that included just four points in 10 minutes before he got hurt against the Heat.

Remember, with Parker, the Spurs had gotten off to a 1-4 start. And the win was a 129-125 double overtime victory against the Minnesota Timberwolves.

In that game Parker torched the Wolves for 55 points.

The Spurs, with Parker providing a career-best effort, still needed two overtimes to dispose of the lowly Wolves.

Without Parker, the point guards on the roster are rookie George Hill and old-timer Jacque Vaughn.

Assuming that the injury is only four weeks and not longer, the fact remains that neither Vaughn nor Hill appear to be a suitable replacement. .

So expect the Spurs to explore some sort of trade and it doesn’t have to just for a point guard.

Of course Tim Duncan should be exempt from any criticism. In the first five games, Duncan was averaging 26 points and 11.6 rebounds. A more telling statistic is that he was averaging 39 minutes.

Popovich has had no other choice but to ride his 10-time all-star. Duncan, however hasn’t carried such a heavy workload in recent seasons. During each of the previous four regular seasons, he averaged fewer than 35 minutes per game.

These extended minutes Duncan is playing now could be felt by March, when the Spurs hope to be making a mad dash for a Western Conference playoff berth.

Duncan will turn 33 on April 25 and there is a legitimate question as to whether his team will still be playing on that date.

Even if Parker and Ginobili return to form, the rest of the roster must become more productive.

One positive has been the play of former Washington Wizard guard Roger Mason, who was averaging more than 16 points and 34 minutes per game. Mason is somebody with a career average under six points.

It’s true that Mason was never was given this much playing time in the past, but could he hold up for an entire season with extended minutes and heightened expectations?

Michael Finley has averaged six points in just under 30 minutes per game. At 35, Finley is a liability if he isn’t able to shoot with better accuracy. And Finley has struggled from the perimeter, shooting under 27 percent from the field. .

The fact that he’s averaging so many minutes speaks to the lack of depth for San Antonio.

Bruce Bowen, 37, has seen his time decline. He is known as a defensive stopper, but in all fairness, isn’t quite the player he has been in recent past. And when the Spurs are on offense, it’s like playing four against five.

Center-forward Kurt Thomas is 36 and one wonders if he has gotten off to a slow start, or if he is among many Spurs who are showing their age.

Swingman Ime Udoka, forward Matt Bonner and forward-center Fabricio Oberto must step up their game and one wonders if that is possible.

For many years the trio of Ginobili, Duncan and Parker have been able to blend with role players to make the Spurs a championship contender.

This season the role players have provided diminished production. Which is why even when the Big Three are healthy together – and one can’t be sure when that will be – the Spurs are going to have to acquire a dependable player or two off the bench.

If not, the Spurs face the real prospect of missing the postseason for the first time since the 1996-97 season.