The rebirth of Shaq?

The rebirth of Shaq? 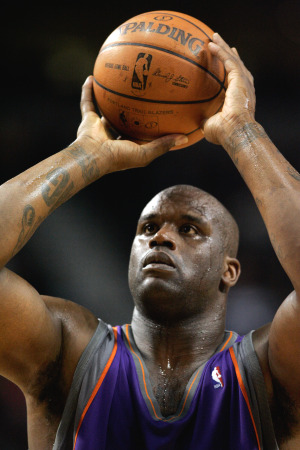 Tex Winter never pays much attention to what Shaquille O’Neal has to say. “He’s colorful, isn’t he?” the 86-year-old hoops guru says with a chuckle.

On the other hand, Winter watches very closely what Mr. O’Neal, the Phoenix Suns center, does on the floor.

It takes a lot to impress Winter, Phil Jackson’s longtime mentor and now a consultant to the Los Angeles Lakers. However, Winter admits to being impressed with what he’s seen of Shaq this year. “I think he’s in pretty good shape,” Winter said. “He’s a little thinner, a little better conditioned, a little more mobile, moving a little better than he has the last few seasons.”

Winter has viewed with curiosity the Suns’ acquisition last season of the behemoth O’Neal. At the time, Winter said it didn’t make clear sense, adding the big, lumbering fella to a team that was built to run. But having watched them adjust, Winter has come to believe that the Suns probably need to embrace O’Neal a little more than they have, to go ahead and find their new identity. In Shaq’s parlance, that would translate to “give me the ball and let the big dog eat.” “There’s a certain way you have to play with Shaq,” Winter observed. “Get him the ball on the low post, and go from there.”

A guardian of the game who never hesitates to criticize a superstar, Winter had his conflicts with O’Neal when the big guy was with the Lakers. Winter, though, conceded that “Shaq’s probably not getting it enough at this point.”

Of course, it probably would work better for the Lakers if the Suns remain conflicted and caught at crossed purposes. The competition in the Western Conference is already tough enough. O’Neal had recently implied that Jackson was somehow to blame for O’Neal’s feuding with Kobe Bryant.

Winter has long been on the record that Jackson, as Lakers coach, bent over backward to coddle O’Neal to the detriment of Bryant. As for O’Neal’s allegation that Jackson was behind the conflicts with Bryant, longtime Laker observers know that O’Neal had an aggressive agenda against Bryant months before Jackson or Winter came to the team in 1999.

Winter also paid little mind to the recent dust-up between the Lakers Trevor Ariza and teammate Sasha Vujacic. Ariza got upset with Vujacic for taking a badly missed three-pointer instead of moving the ball. The two had to be separated by teammates. Winter himself was never shy about making his opinions known. Lakers assistant Brian Shaw chuckles about Tex getting upset with him when he was a Lakers guard.

So it’s not surprising that Winter didn’t see anything too wrong with Ariza getting ticked off.

“I don’t blame him,” Winter said. “Good for him. I’ve always tried to let people know they’ve gotta play the game right. I don’t like people to discredit the game of basketball.”

Winter also noted that Jackson moved quickly to talk to Ariza about losing his temper. “Phil won’t let things hang,” Winter said. Of course, assistants sometimes had to step in back in the day when Winter, then Jackson’s assistant with the Chicago Bulls, would get upset with Luc Longley or some other transgressor.

Then again, there’s much about Ariza that brings the days of yore to mind for Winter. “Ariza’s got tremendous reach. He’s active,” Winter said. “When he’s playing defense he’s a little bit like (Scottie) Pippen with those long arms and the way he anticipates the passing lanes and gets his hands on the ball. “I’m not saying he’s another Pippen,” Winter added quickly but acknowledged that Jackson and his Lakers coaching staff have mentioned Ariza and Pippen in the same breath.

Longtime observers will recall that the great Pippen at 6-7 offered tremendous defensive versatility. He was able to sink into the lane to help defend the post, then showed the quickness to recover to the perimeter. “Ariza plays a little differently than Pippen on the help defense,” Winter said.

But the 6-8 fourth year forward reminds Winter of Pippen, Michael Jordan and Ron Harper, the Bulls triumvirate that ruled the league as stealers from 1996 to 1998. “Pippen and Jordan and Harper were good at laying back there and then jumping in and playing the passing lanes,” Winter said. “That’s why we (the Bulls) were a very good defensive club with those three guys. Ariza does that too. We need more like him.”

Winter was quick to add that this 2008-09 version of the Lakers is showing much defensive promise. Kobe Bryant has offered encouraging flashes of inspired defensive play. “Kobe will overplay and gamble a lot,” Winter said, acknowledging that such a ploy was also a Jordan trait. “But Kobe doesn’t lay back and come up with the basketball.”

It seems Winter is suggesting that Bryant add such a wrinkle to his portfolio, so keep a lookout for that at some point this season. “They’re working hard on defense,” Winter said of the Lakers. “They’re not the old Bulls. They’ll have their own character.”

The Lakers, of course, will have to improve dramatically as a defensive unit if they want to erase the memories of the hurting that the Boston Celtics put on them in the championship series in June. The pain of that loss seems to have added purpose to Jackson’s approach as well. “It’s motivated him to the point that he wants to get with it,” Winter said of the Lakers coach. “And he is getting with it. He’s controlling things a lot more than he did in the past.”

Then again, Jackson has more to control this time around. The Lakers are a very deep team. “He likes it,” Winter said of Jackson’s attitude toward the depth.

Asked if he thought this Los Angeles club has even more depth than the great Bulls teams that won six championships, the coach replied, “We had some pretty good subs in Chicago. But I don’t know if we had a team where the subs can play as many minutes as these Lakers guys can.”

Winter also is pleased that Bryant “has settled in to a team role” despite transgressions here or there that have left Jackson complaining a bit to reporters. “Kobe’s gotta hit shots,” Winter said. “He’s gotta take those outside shots. They’re important to the team. He cant’ go to the basket all the time.”

It’s a question of balance for Bryant, Winter said. The All-Star guard has to keep a steady mix between shooting and driving. That sounds simple, but it’s never easy to measure balance over the course of a game. “Kobe just can’t rely on one thing or the other too much,” Winter said. “Kobe wants to involve everybody else, and that’s good. But sometimes it’s maybe too much so. With players like Kobe and Jordan, it’s always a question of balance.”

Winter is preparing to rejoin the team in Los Angeles after taking a couple of weeks away to deal with the painful shingles that have bothered him for three years. Seemingly concerned about his mentor, Jackson suggested Winter contact his “holistic” doctor in New York who helped Jackson deal with hip pain. Winter has made the contact and is hoping for results.

Meanwhile, he’s eager to get back to the team to take his mind off the pain. Winter was also mindful of the passing this week of Pete Newell. Winter recalled that his Kansas State team went to Berkeley in December of 1958 and beat Newell’s Cal team that went on to win the NCAA championship that spring of 1959. Winter’s K State team spent part of that reason ranked number one in the country. But his club lost to Cincinnati and Oscar Robertson in the Midwest Regional Final, 85-75.

Newell’s club went on to beat Robertson and Cincy in the national semifinals before nipping West Virginia and Jerry West for the NCAA title. “Pete Newell was a great coach and especially a great teacher,” Winter said.